For almost 20 years, the Augusta Plein Air Art Festival has been one of the most popular events in the Midwest as it attracts more than 100 artists in 10 states. 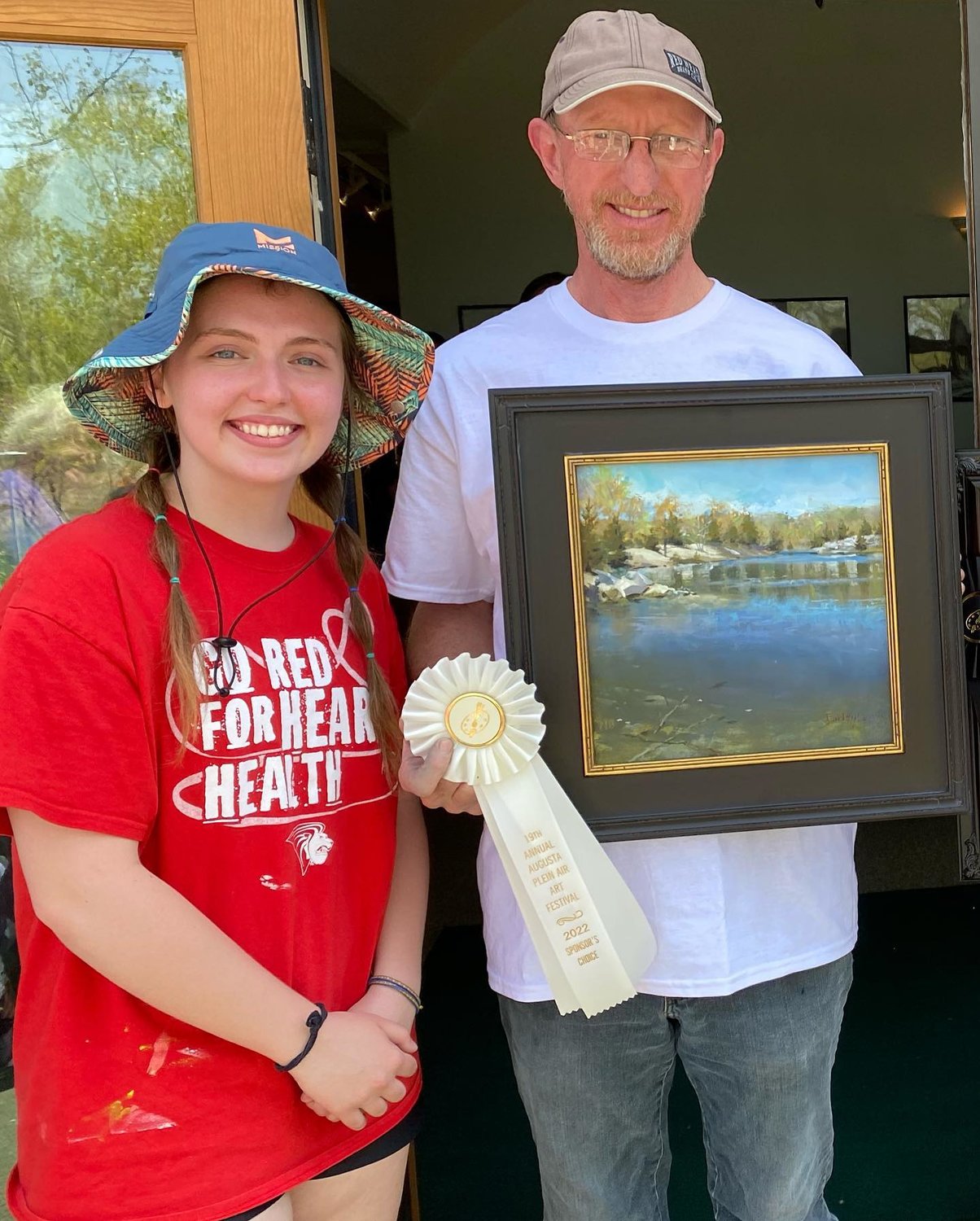 Montgomery City resident Meredith Rodgers, left, poses with first-place winner Farley Lewis after one of the contests at the Augusta Plein Air Festival on April 27. Rodgers was the only college student chosen to participate in the event. She also worked as one of the judges.
Theo Tate photo
Posted Thursday, May 12, 2022 1:17 pm
By Theo Tate

For almost 20 years, the Augusta Plein Air Art Festival has been one of the most popular events in the Midwest as it attracts more than 100 artists in 10 states.

When Montgomery City resident Meredith Rodgers was chosen as the only college student to participate in the 10-day festival, she was ecstatic.

“It was extremely cool,” said Rodgers, a freshman at Lindenwood University. “It was a really fun opportunity.”

Rodgers went to the festival with her professor, John Troy. She not only got to do a painting, but she also worked as one of the judges.

“They were excited to have a student there,” Rodgers said. “The woman in charge was so nice. to the students. I walked up there shaking whenever I told her I was a student. Because it was the first time I ever got to do this, they assigned me a professional artist I got to shadow with. Her name was Mary Beth. I got to follow her around. We chose a spot and we just painted together.”

The Augusta Plein Air Art Festival ran from April 21-30 and wrapped up its 19th year. It provides artists the opportunity to expand their markets, enhance their skills and receive recognition for their art.

Rodgers worked on her painting at Klondike Park, which is located in Augusta. She said the park had a really big bluff.

“I was on the side of the road,” Rodgers said. “There was a little pond in front of it. I just painted the bluff. Apparently, there were like eight artists on top of that structure, which was really cool. People were all over that place.”

Rodgers and Troy attended the festival on April 27.

“John Troy and I drove out there and spent five or six hours,” Rodgers said. “I had four hours to paint anywhere in this park. There were 65 professional artists in total. After the painting session was over, I got to go up there with Troy and we got to judge all of the works. There were about 30 or 40 that ended up being put on display.”

Rodgers received a goodie bag that included art supplies, colored pencils, paint and a canvas for her participation. She said she was told by other artists that she should register as a professional artist in next year’s event.

“It’s a 10-day event,” Rodgers said. “They want me to come for multiple days and keep painting with them, which I’m going to do next year most likely. It was a really good way to network with other artists. I never had a chance to talk to any other professionals before.”

Rodgers said she enjoyed being in the small town of Augusta, which is located in St. Charles County.

“Overall, it was very pretty,” Rodgers said. “The weather outside that day was gorgeous. I don’t think it would have been nearly as enjoyable if it was storming like it was supposed to that day.”

Rodgers graduated from Montgomery County High School last year. She won a pair of art-related scholarships to help pay for her freshman year at Lindenwood.

Rodgers, who started a business of selling lucky pennies last fall, said she is happy to wrap up first year of college.

“It’s insane how quick these eight or nine months have gone,” she said. “I was in so many art classes this year.”