Sisters Lila and Quinn Cope found a way to keep themselves busy during their day off of school on Nov. 14.

The students from Jonesburg Elementary School were helping a neighbor, Don Vincent, … 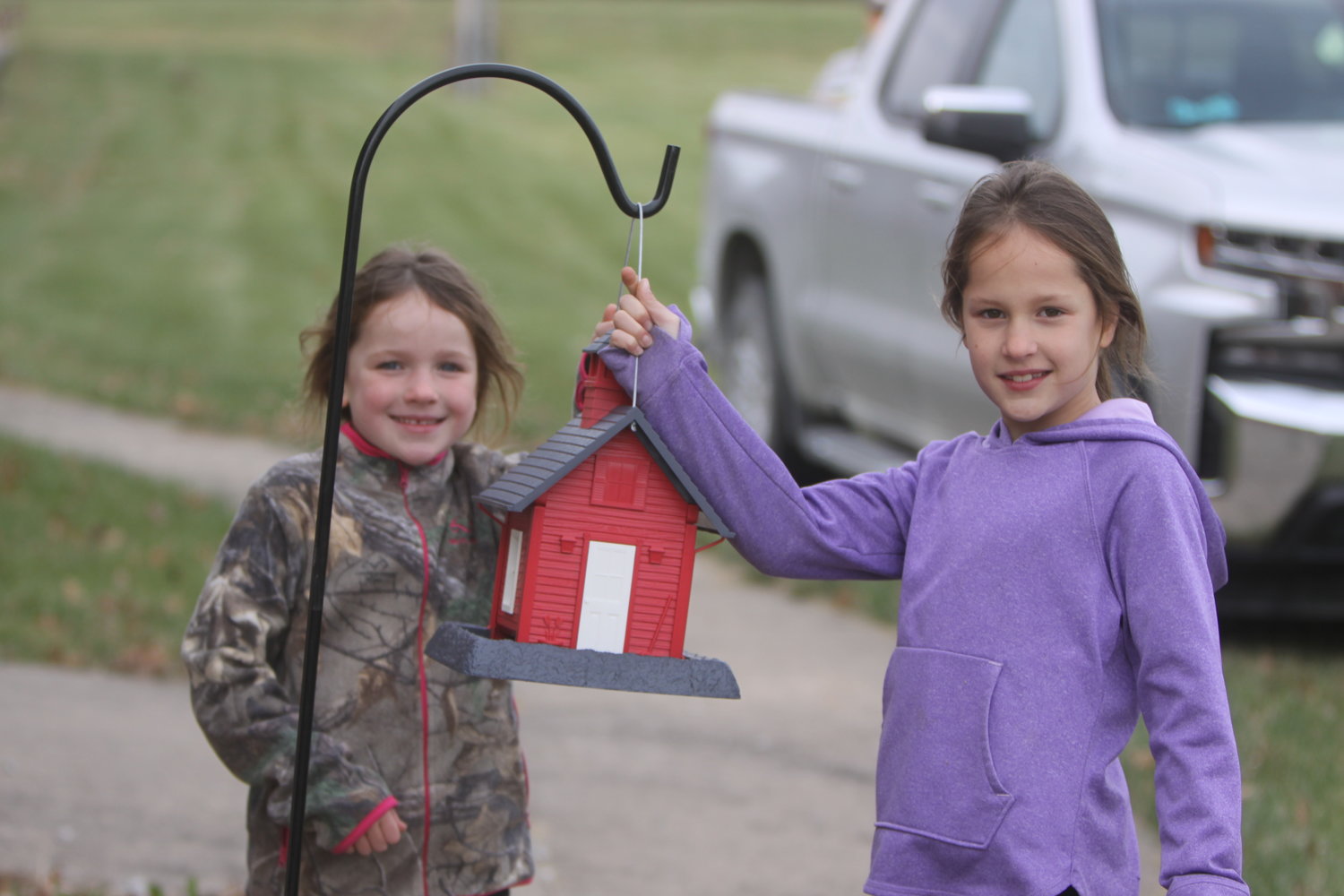 Sisters Lila and Quinn Cope pose with a bird feeder at St. Andrew’s in New Florence on Nov. 14. A total of 19 bird feeders were installed at the St. Andrew’s facility.
Theo Tate photo
Posted Saturday, November 26, 2022 12:22 pm
By Theo Tate

Sisters Lila and Quinn Cope found a way to keep themselves busy during their day off of school on Nov. 14.

The students from Jonesburg Elementary School were helping a neighbor, Don Vincent, install 19 bird feeders at the St. Andrew’s at New Florence nursing home. That way, residents can watch something else other than television.

“I really enjoy helping people,” Quinn said. “My most favorite thing to do in the world is to help people who aren’t able to do anything.”

Missouri Mulch, based out of New Florence, donated all of the bird feeders and stakes. The project was part of the 110th anniversary celebration of Independent Stave Company, which is the sister company of Missouri Mulch.

“They’re very great people,” Vincent said. “They want to come do something to help the public out and do it locally. What better way to do it than this?”

Rachel Vincent, who has been working at Missouri Mulch since 2006, said she and Don – who is her husband – came up with the idea of adding bird feeders to St. Andrew’s since her brother, Richard Westerman, is a resident there.

“We kept the bird feeder filled for him near his room ever since he’s been there,” Rachel said. “The guys just enjoy watching the birds. So we decided that this (the bird feeders) would be a good charity.”

Don said Westerman has enjoyed watching his bird feeder since it was first installed next to his residence nearly three years ago.

“He likes watching the birds and stuff like that,” Don said. “It seems like these older people are like that. All they’ve got is the TV to look at all of the time. He always likes birds. It’s just good entertainment. We came here one time and we filled his feeder up. The bird feeder of the neighbor next door was broken. I fixed it and filled it up. I told Rachel that we want all of these people to have a doggone bird feeder.”

“We were kind of waiting for the winter to hit,” Vincent said. “Donny put the stakes on Nov. 7 because it was warmer and the ground was unfrozen. Then, we decided to hang them on Nov. 14.”

There were chilly conditions on that Nov. 14 day. Still, the Cope sisters were determined to put up all of the bird feeders.

Quinn is 7 and is in second grade and Lila is 6 and is in kindergarten. After Don fills up the bird feeders with bird seed, the girls hang them on the stakes. Rachel said she was happy that her little neighbors got to help out.

“Donny and I thought they would probably enjoy doing that,” she said.