For many years, Julie Bote and Victor Wiser were big contributors to the Old Threshers Show.

Bote worked as a judge at the fiddle contest and helped haul in steam engines, while Wiser was an … 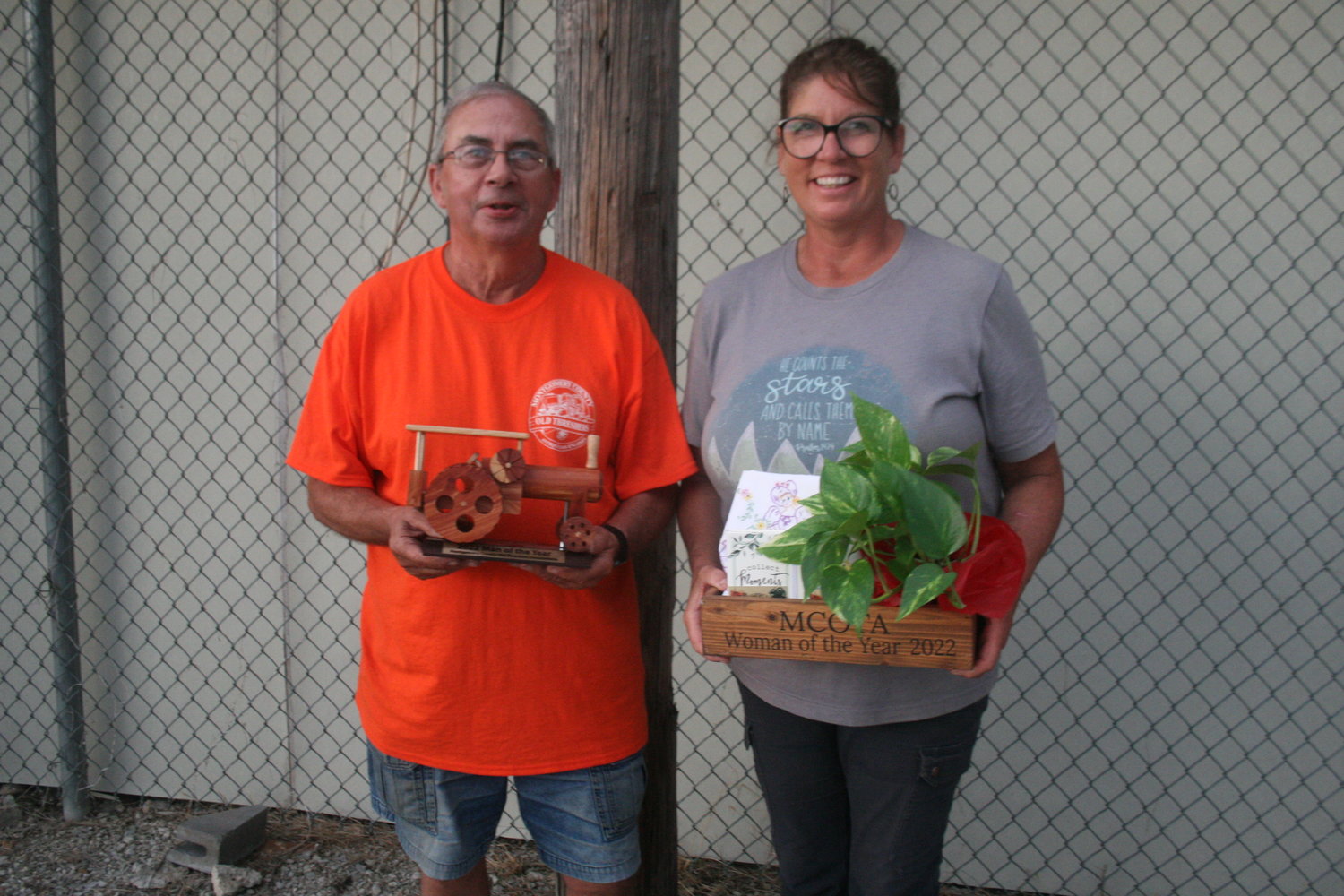 Victor Wiser and Julie Bote pose with their Old Threshers Man and Woman of the Year awards on Aug. 20 at the Montgomery County Fairgrounds.
Theo Tate photo
Posted Wednesday, September 7, 2022 9:05 am
By Theo Tate

For many years, Julie Bote and Victor Wiser were big contributors to the Old Threshers Show.

Bote worked as a judge at the fiddle contest and helped haul in steam engines, while Wiser was an announcer of the Parade of Power and sang the National Anthem.

On the evening of Aug. 20, Wiser and Bote were awarded for their hard work at the annual event, earning Old Threshers Man and Woman of the Year honors, respectively, during a ceremony at the Montgomery County Fairgrounds.

The Man and Woman of the Year awards, which started in 2019, are given to a man and woman who not only made contributions to the Old Threshers Show, but raised the most money out of all of the contestants. Each of the six contestants – three men and three women – had a collection jar for donations. All of the contestants combined to raise $400.62, and that money will go to the Central Missouri Honor Flight.

“It was a privilege to be able to collect money for such a terrific organization,” Bote said. “It gives me chills to know that we were able to do it in our little community to provide some money for this. It was really fun to do and it means that we as a community can come together, more so than anything I can do myself.”

Wiser said the award meant a lot to him since he was on the Central Missouri Honor Flight No. 60 a long time ago.

“I was 18 by three days when I went into the service, getting ready to go to Vietnam,” Wiser said. “But I was blessed and I didn’t have to go. I was in line twice, but didn’t go either time.”

The other candidates for the Old Threshers Man and Woman of the Year awards were Erin Johnson and Stephanie West in the women’s division and Curtis Hillebrand and Terry Hillebrand in the men’s division.

Bote has been working as a fiddle judge for several years. The Old Threshers Fiddle Contest was held on Aug. 19.

“Both of my daughters were fiddle players,” Bote said. “We would travel around Missouri and enter contests. I never got an opportunity as a mother to be part of the judging process. So when my daughters got older, we decided that I could do judging. I had the unique perspective of fiddle camp and the experience from all of these fiddle contests for Missouri. I just really love it. It’s very important to me to further Missouri fiddling and to be part of the whole association.”

Wiser said he has attended the Old Threshers Show every year since it first started in 1976.

“I enjoy all of the work and people who are involved,” Wiser said. “I have had tractors since I was 12 years old. It’s just been in the family and there are a lot of friends. There are nice people here to talk to and there are people from Iowa, Indiana and Illinois and everywhere. So you just develop friends. It goes by too fast.”

The Old Threshers Show was held for four days from Aug. 18-21. Bote said she enjoys going to an event that celebrates Montgomery County’s farming heritage.

“The people are having fun,” Bote said. “Everybody is happy and enjoying themselves. In this period in our lives, it’s really important to get the kids out and let them see happy people. People are having fun, riding tractors and doing things the way we used to do them.”