It wasn’t the way the Montgomery County football team wanted to end its season.

The Wildcats lost 26-8 to the Centralia Panthers in front of their home fans in a Class 2, District 6 … 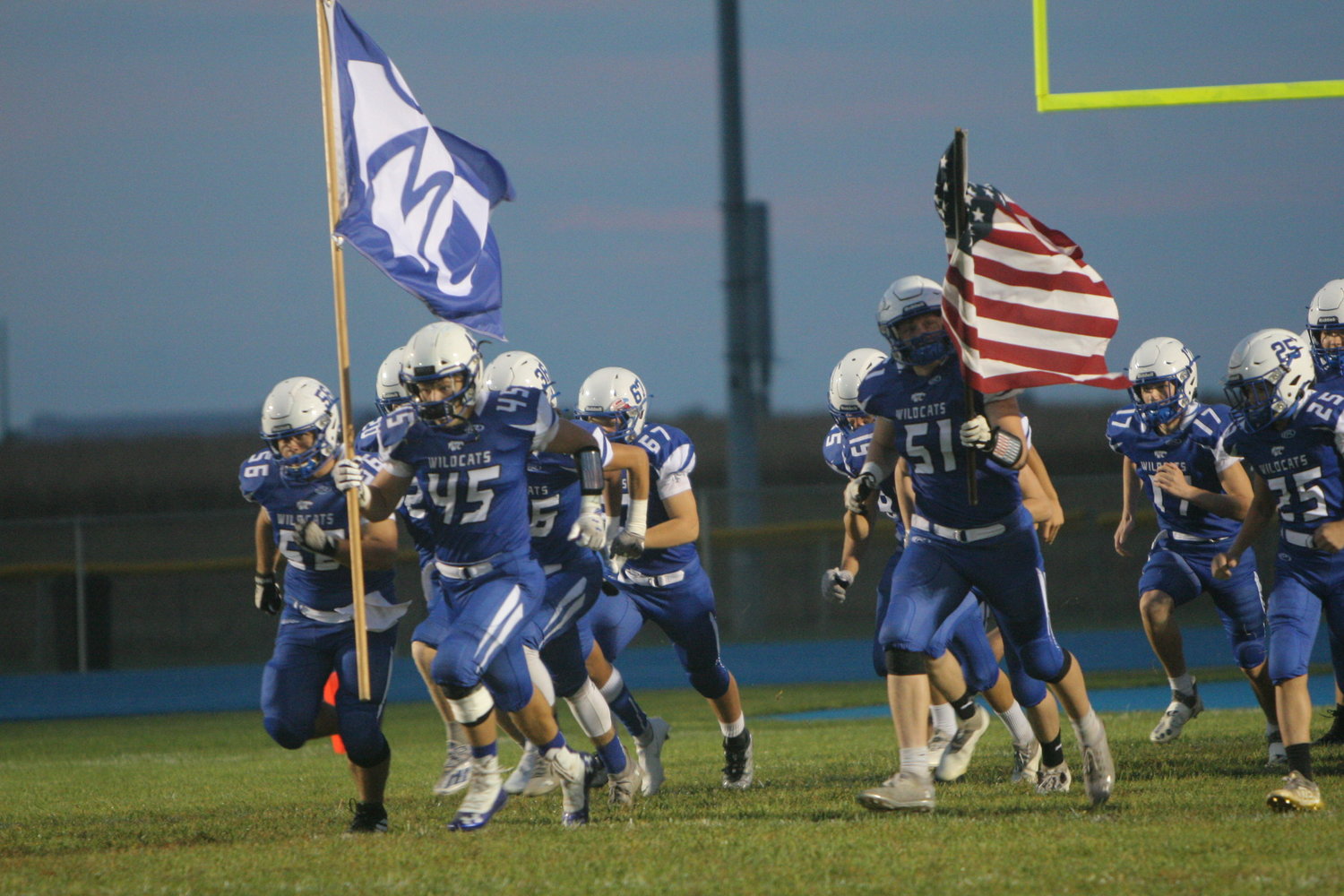 The Montgomery County football team charges to the field before its game against Greenville (Ill.) on Oct. 1. Thomas Klekamp (45) is holding the MCHS flag and Evan Abercrombie (51) is holding the American flag.
Theo Tate photo
Posted Friday, December 3, 2021 9:05 am
By Theo Tate

It wasn’t the way the Montgomery County football team wanted to end its season.

The Wildcats lost 26-8 to the Centralia Panthers in front of their home fans in a Class 2, District 6 quarterfinal game on Oct. 29 at Jim Blacklock Field, making it the first time since 2009 MCHS had its season ended with a home loss.

“I played for only two years, so it was a little short and unexpected,” MCHS senior Keenan James said. “It sucks that it’s over now. I loved the sport and I learned to love it. It’s sad.”

Despite the devastating loss, MCHS celebrated its third consecutive winning season. The Wildcats finished 6-4 after splitting their first four games.

“We got better every single year, worked hard on the field and practiced 100 percent every single day,” James said.

The Wildcats’ 2021 season got off to a blazing start on Aug. 27, when they knocked off Hermann 31-16 on the road for the first season-opening victory in eight years. They cruised past Louisiana 41-13 the following week.

MCHS also had wins over Wright City, Greenville (Ill.), Van-Far and North Callaway. The Wildcats snapped a four-game losing streak to North Callaway with a 32-16 victory in the regular season finale for both teams on Oct. 22.

“This senior group over their four years of high school have won more football games than any other group of seniors that I had,” said John Klekamp, who wrapped up his 12th season as MCHS coach. “I’m really proud of them. It’s pretty special for me.”

Klekamp said he will miss coaching his son, Thomas, after four years at MCHS.

“I had my kid in my program for the last six years, going through middle school and high school here,” Klekamp said. “Fortunately for him, it looks like he’s going to have an opportunity to play on Saturdays (in college). We can look forward to that. But this is tough for him because Montgomery County football was a huge part of his life.”

Klekamp said his team had to play without several seniors throughout the season due to injuries.

“Some of our seniors have really worked hard,” Klekamp said. “Some of our seniors lost their season. We had five legit varsity football players who lost their season at different times throughout the year. If those guys stayed healthy, you’ll never know. But we can’t control that. We can’t control injuries and we can’t make excuses. We still have to go out and play a football game and we still have to win a football game.”

Among the key returners for the Wildcats next year are juniors Adam Czerniewski, Matt Clark, Gunner Sexton and Travis Hill.

“We have some guys coming back who are going to be really good football players for us,” Klekamp said. “But this is the time period where guys have to figure out if they really want to work hard enough to be a championship football team. We have to get stronger. There were times in games this year where we got pushed around. When you get pushed around, you’re not going to win too many football games. We’ll see how those guys bounce back and how they’ll decide to go from right now into their senior year.”