After four years, Makayla Beaver will definitely miss being a member of the Montgomery County volleyball team.

“These girls have been my family since day one,” the MCHS senior … 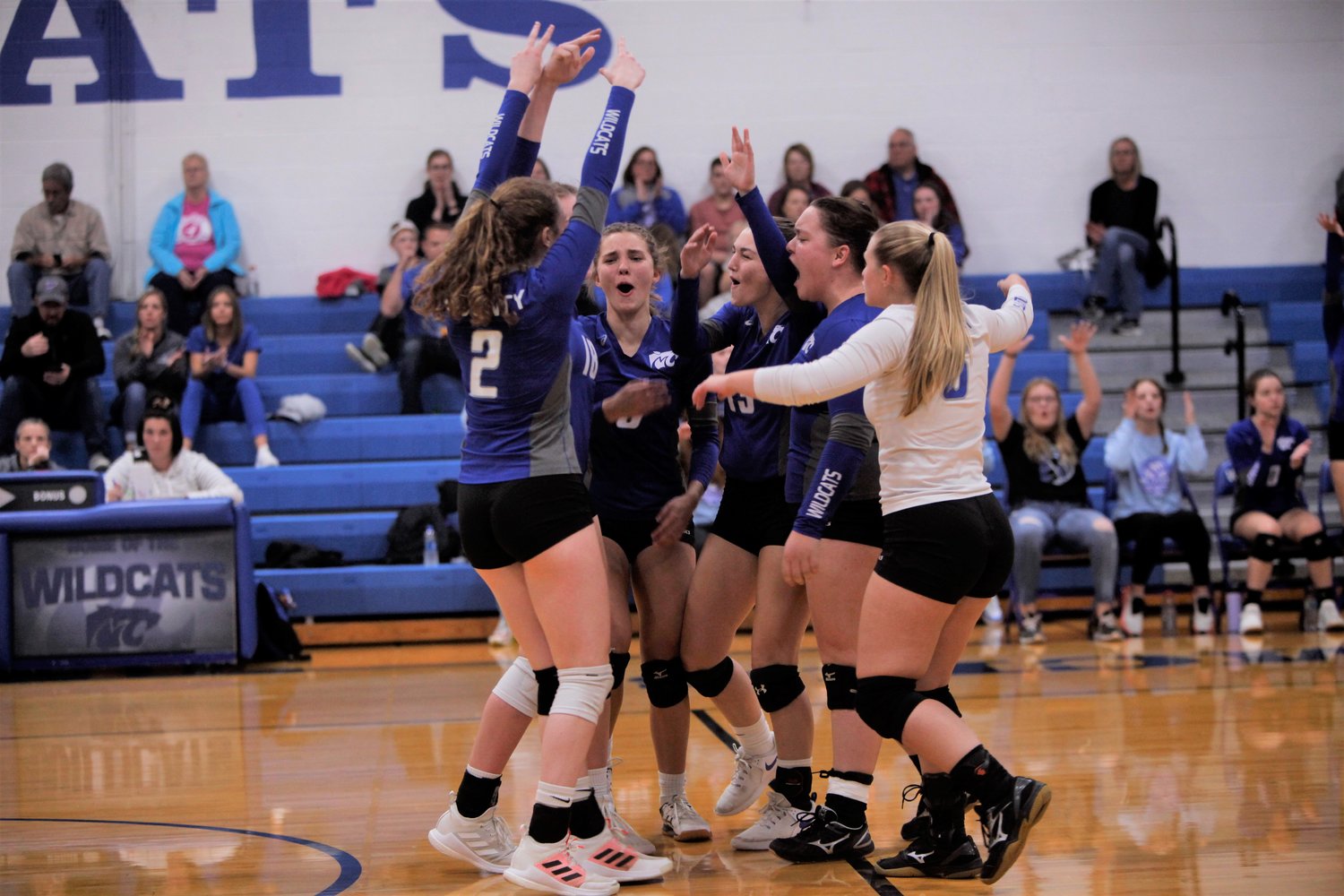 The Montgomery County volleyball team celebrates after getting a point against Centralia in a Class 3, District 7 semifinal match on Oct. 25. The Wildcats finished their season at 10-14-3 and captured an Eastern Missouri Conference championship for the fourth year in a row.
Theo Tate photo
Posted Thursday, November 18, 2021 5:53 pm
By Theo Tate

After four years, Makayla Beaver will definitely miss being a member of the Montgomery County volleyball team.

“These girls have been my family since day one,” the MCHS senior said.

Beaver and two other seniors – Sarah Cluver and Ella Cobb – saw their high school volleyball careers come to an end on Oct. 25 after the Wildcats lost to Centralia in five games in a Class 3, District 7 semifinal match at Ballew & Snell Court. All three of them joined the Wildcats’ program when they were freshmen.

“They were in it 100 percent,” MCHS coach Rachel Leu said. “I really hate that (their careers) had to end on a loss, but we also reminded them of all of the good that we did this season and to not forget about that as well.”

The Wildcats finished 10-14-3 overall and captured the Eastern Missouri Conference championship for the fourth year in a row with an 8-0 record.

MCHS got off to a 6-3 start after winning four matches in a row. But the Wildcats won just four of their next 18 matches.

Leu, who wrapped up her eighth season as coach, said she was pleased with the way her team played despite the losing record.

“It was a little bit of a rebuilding year when you graduated some good seniors who were leaders for you,” Leu said. “With all of the work that the girls have put in, they have to understand that this may not be a year where we get a bunch of wins. But we’re doing this to try to prepare us. They saw what all of that work was about during the season. I think it helped them realize that there was a purpose to everything.”

Beaver, who started playing varsity when she was a sophomore, said her team had very strong chemistry this year.

“If someone’s hurting or gets down, someone is always there to help,” Beaver said. “I think that’s how it’s going to be next year. They are an amazing group of girls. They’re so kind and loving. It’s amazing to play with them.”

“These girls become family for us because we spend just as much time with them, if not more, than our family,” Leu said. “I truly believe in this team and all of the good that they could do.”

Cluver, Fischer and Shaw were the Wildcats’ representatives on the all-district team. Cluver led the Wildcats in digs (235) and service points (156), Shaw finished with 168 kills and 43 blocks and Fischer had 152 kills.

“We had a great season,” MCHS JV coach Roxanne Sellenriek said. “Whether the girls were on the court or on the bench, we really came together as a team, supporting each other through it all. I am so proud of what they learned this year and how hard they played.”