For four years, Lyric Ford has been an outstanding performer for the Montgomery County cross country and track teams, earning a combined total of six all-state medals.

Now, the MCHS senior will … 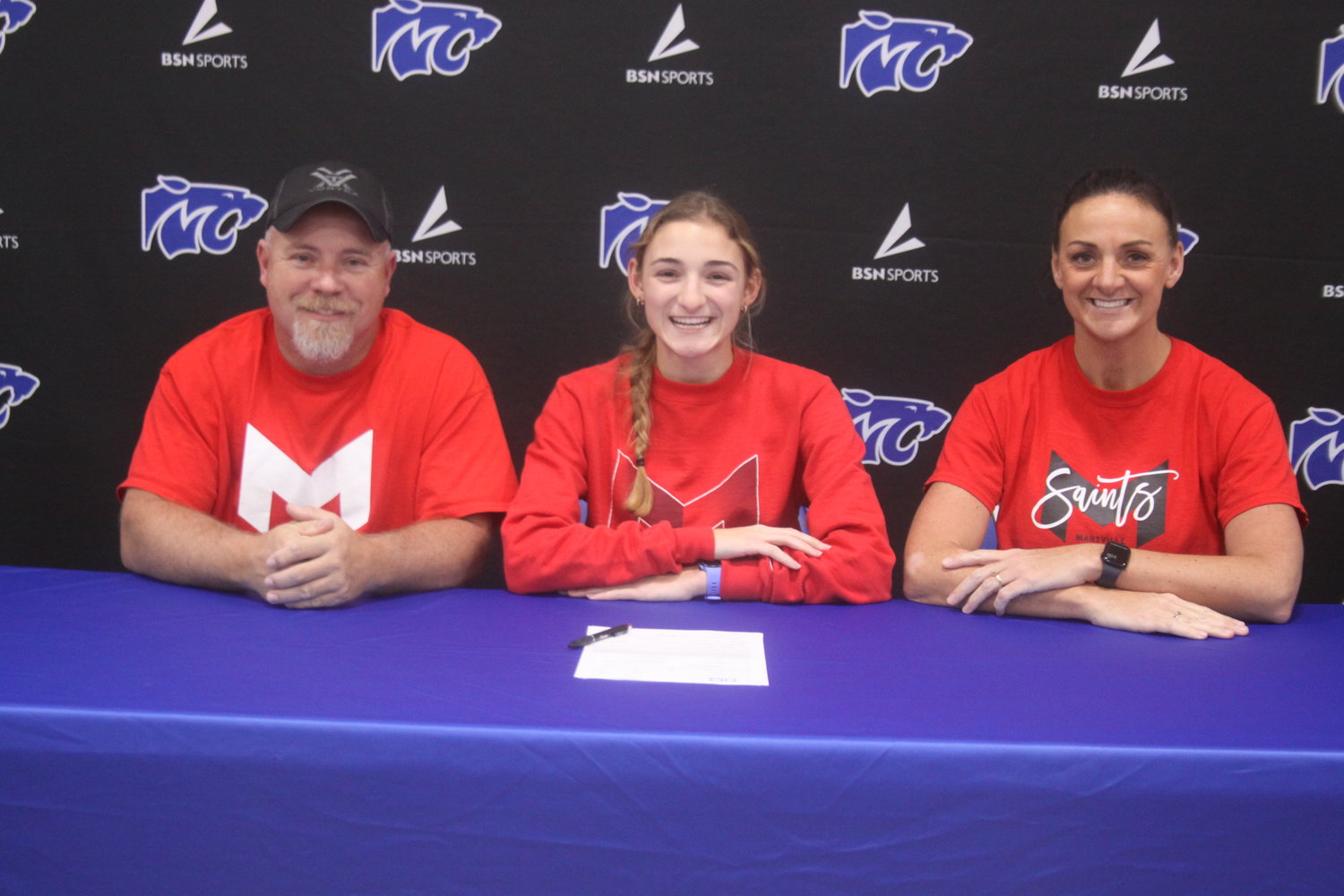 For four years, Lyric Ford has been an outstanding performer for the Montgomery County cross country and track teams, earning a combined total of six all-state medals.

Now, the MCHS senior will look to carry that success to Maryville University next year. She signed a letter of intent to run cross country and track at the NCAA Division II school in St. Louis on Dec. 16 in front of numerous family members and classmates at the MCHS gymnasium.

“It means a lot to me,” Ford said. “It will be really sad whenever I have (cross country and track) meets farther away. They won’t be there and I won’t be able to talk to them after the meets. I wish I could pack them all up and take them to every meet I go to. But I know that even though the meets are further away, I know they will be silently cheering me on from afar.”

Ford will join a cross country/track program that is coached by Kayla Kregel. Dawson McCown, a 2022 MCHS graduate, also runs cross country and track with the Saints.

“I am definitely excited for sure,” Ford said. “From what I heard from Dawson and the coaches, it’s a rebuilding period, especially for the girls' side. So I’m hoping that I can help with the rebuilding process. Whenever I toured there the first time, they had only three girls on the cross country team. Now, they’re up to about seven or eight. I’m hoping I could definitely help with that process.”

During the 2022 fall season, the Maryville women’s cross country team had 10 runners – half of them were freshmen – and had a pair of third-place finishes in meets at McKendree University and Principia College. The women’s track team increased its roster size this season to 35 athletes after having 20 last season.

Choosing to run for Maryville was not an easy decision for Ford. She also considered Southern Illinois University Edwardsville, a Division I program.

“I didn’t think it was going to be that hard,” Ford said. “But whenever you start talking to different coaches at different schools, you start to form your own personal connection with them and it definitely gets hard. Narrowing it down to the final two, it wasn’t crazy hard. But when it came down to the final decision, that was when it got hard. I had to get the pros and cons list going.”

Ford said she decided to run for the Saints after going to the school’s homecoming dance.

“I hung out with the people on the team,” said Ford, who will major in nursing. “Being around them, I just knew that these are the people I wanted to be surrounded by for the next four years.”

Ford earned four all-state medals during her four-year cross country career, including a fourth-place finish in the 2022 state meet. She also placed in the 1,600 twice at the state track meet, coming in fifth in her sophomore year and fourth in her junior year.

Ford started preparing for the 2023 track season on Dec. 12, just four days before her signing.

“It’s going well so far,” Ford said. “I have high hopes and big dreams for track this season.”