A veteran and a newcomer will represent the Montgomery County cross country team at the Class 3 state meet on Nov. 5 at Gans Creek Course in Columbia.

Senior Lyric Ford will make her fourth and … 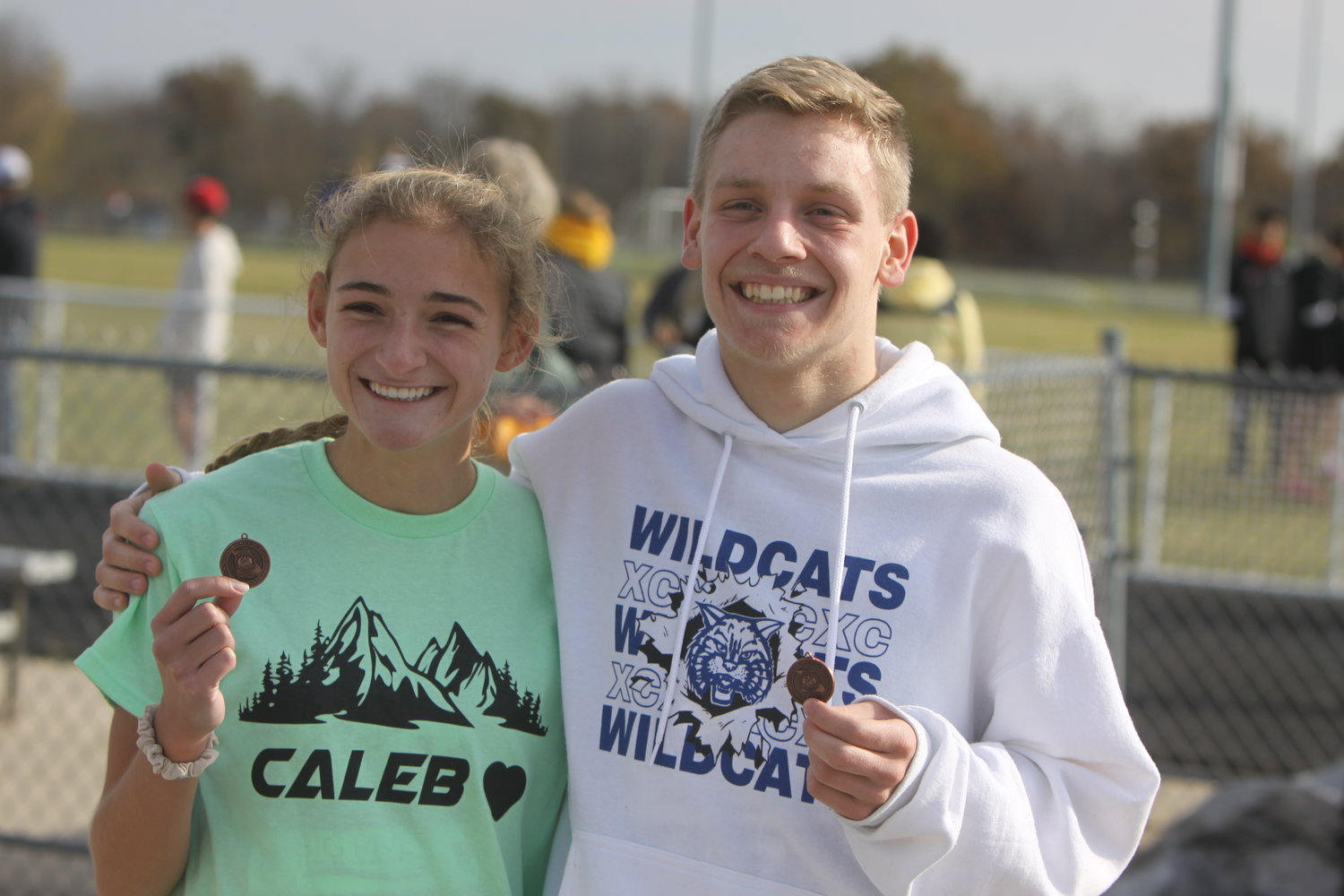 Lyric Ford and Jadrian Thurmon of Montgomery County pose with their medals after the Class 3, District 3 championship meet on Oct. 29 in Fulton. Ford and Thurmon will represent the Wildcats at the Class 3 state meet on Nov. 5 in Columbia.
Theo Tate photo
Posted Friday, November 4, 2022 9:44 am
By Theo Tate

A veteran and a newcomer will represent the Montgomery County cross country team at the Class 3 state meet on Nov. 5 at Gans Creek Course in Columbia.

Senior Lyric Ford will make her fourth and final appearance at the state meet, while sophomore Jadrian Thurmon will compete at state for the first time. They earned trips to Columbia by finishing in the top 30 in their respective races at the Class 3, District 3 championship meet on Oct. 29 in Fulton High School.

Ford placed third with a time of 19 minutes, 29 seconds in the girls race to qualify for state. She also earned her eighth medal of the season.

Ford said she is thrilled that she will wrap up her outstanding high school career with another trip to state. She earned all-state medals in each of the last three years.

“It means a lot,” said Ford, who finished 14th last year. “Now, I’ll get to experience it with somebody new.”

Thurmon placed 29th in the boys race with an 18:06. Five months ago, he competed at the Class 3 state track meet for the first time and helped the 800-meter relay team earn a medal.

“It means more to me now than in track season,” Thurmon said.

Ford’s race at state is scheduled for 11:15 a.m., while Thurmon’s race will start at noon. It’s the fifth year in a row the Wildcats will have at least one state qualifier.

Ford finished behind champion Alexandra Volkart of Southern Boone and runner-up Emily Mayfield of Fulton. Volkart, who placed fifth at state the last two years, won with a time of 18:53. Mayfield finished with a 19:09.

“They’re really tough,” Ford said. “I raced against the Fulton girl only once or twice. I say we’re pretty equal with our running abilities. As for the Southern Boone girl, it’s a whole different story. But we’re all best friends.”

Thurmon had to battle with several runners for the final state-qualifying spots. He beat Kai Foster of Fulton by three-tenths of a second for 29th place. The sophomore earned his fifth medal of the season.

“I knew I was up there around 28th, 29th or 30th,” said Thurmon, who placed 39th in last year’s districts at Linn. “I knew it was nerve-racking to figure out what place I was in. That’s why I chased down two people because I didn’t know if I was in 30th or 31st.”

Ford has some advice for Thurmon for his first state cross country race.

“Stay humble and never underestimate people,” Ford said. “Everybody brings their A-game, so you have to be prepared for everything.”

Thurmon said he has enjoyed working with Ford since he joined the team last year.

“I just looked up to her and (MCHS graduate) Dawson McCown a lot when it came to running because they’re so encouraging and inspiring,” Thurmon said. “The way they ran was really satisfying to watch.”

Two Montgomery County seniors ran their final cross country race at Fulton. Destiny Shaw, a state qualifier in her sophomore year, finished 42nd with a 23:15. Carie Schroer came in 63rd with a 24:14.

Schroer said she couldn’t believe her high school cross country career is over.

“I didn’t want it to end,” Schroer said. “I don’t want to be done with cross country. I wasn’t ready to let go yet. I wanted to go to more meets with my team.”

Junior Olivia Shaw finished 50th with a 23:28, freshman Taylor River came in 56th with a 23:55 and sophomore Madison West placed 83rd with a 25:54 for the MCHS girls, who placed eighth with 184 points in the team standings.