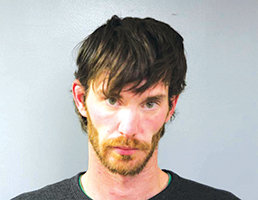 Jurors returned a guilty verdict Wednesday night following nearly five hours of deliberation as a Jefferson City man was convicted for his involvement in a 2017 murder of a Montgomery County reptile breeder.

Michael Humphrey was found guilty of first-degree murder and armed crminal action when the verdict was returned around 9:30 p.m. at the Audrain County Courthouse in Mexico. A change of venue was granted previously in the case. Jurors were brought in from Cape Girardeau County.

Benjamin Renick, 29, was found dead inside his New Florence business, Renick Reptiles, about 6:30 p.m. on June 8, 2017. Police said Renick had been shot several times, including a contact wound to the head.

Also facing the same charges in the case is Renick’s wife, Lynlee, of Columbia.

Prosecutors stated they were pleased with the trial’s outcome, but declined to comment further citing Lynlee Renick’s upcoming trial scheduled to start Dec. 6 in Boone County. Jurors will be brought in from Clay County.
Humphrey was described by investigators as Lynlee Renick’s ex-boyfriend and was enlisted to help after a first attempt to murder Benjamin Renick was unsuccessful.

Both suspects were arrested Jan. 16, 2020, by Missouri State Highway Patrol troopers. Two days earlier, a man who Lynlee Renick was having an affair with told authorities about the murder. The man had previously been interviewed by investigators on Aug. 10, 2017, but denied having any information in the case, according to a probable cause statement. He did not testify in last week’s trial.
The man said he was in a sexual relationship with Lynlee Renick at the time of the murder. They remained in a relationship until mid-2019 and had a child together, police said.

The man said Lynlee Renick believed her husband was going to leave her because of the financial troubles she was facing from a spa business she owned in Columbia. It was there Lynlee Renick and a co-worker plotted ways to murder Benjamin Renick. The first attempt was unsuccessful when a protein drink was spiked with “an enormous amount of narcotics” by Lynlee Renick, causing Benjamin Renick to become very ill, according to a probable cause statement.

After that failed attempt the man told police Lynlee Renick and the co-worker made contact with Humphrey, who started scheduling massage sessions at the spa so they could plan ways to kill Benjamin Renick.

On the day of the homicide, Humphrey came to the spa where he and Lynlee Renick met and then drove to Benjamin

Renick’s business. Both of their cellphones were kept at the spa to help cover their movement, the man told investigators.

Humphrey backed out of the plan for him to shoot Benjamin Renick and Lynlee Renick shot her husband multiple times while he was cleaning inside, according to police. Humphrey then picked up shell casings but missed some that were not easily visible, police reported.

Lynlee Renick and Humphrey returned to the spa in Columbia, where she showered and gave Humphrey her clothes to dispose of.

Early on, investigators determined foul play was involved and believed Benjamin Renick knew his killers due to the location of his body inside the business.

Investigators also reported Lynlee Renick and Humphrey had frequent contact by phone leading up to Benjamin Renick’s murder, but they quit communicating after the homicide.