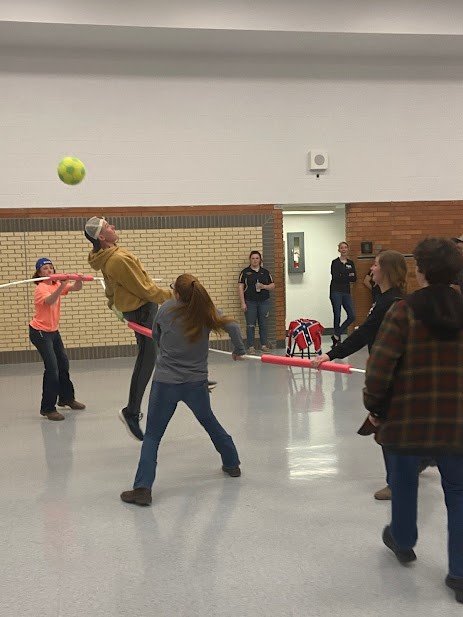 Senior Izzy Freymuth started the meeting with opening ceremonies. The meeting then moved into the reports from the secretary and treasurer. Then the old business was covered, which consisted of announcements of CDE and LDE members going to state.

The teams that qualified for state are: food science, horses, and floriculture. State competition was scheduled for April 21 and 22.

There was a reminder of Ag Safety day and the spring trip. After all old business was covered, the meeting moved into new business. Members were encouraged to apply for a chapter officer position. Members were told about the Area V banquet, the different senior scholarships, proficiencies and state degrees.

There was a reminder that the next FFA meeting is scheduled on May 25 and will include mud volleyball.
After the meeting was adjourned, members moved to the MCMS multipurpose room for a game of human foosball. They would get in groups of three or six, hold onto the PV pipe and set up like a foosball table. Then, the goal was to score a point in their net. Everyone seemed to have a blast at this meeting.