First, she was named one of the chapter officers. A week ago, … 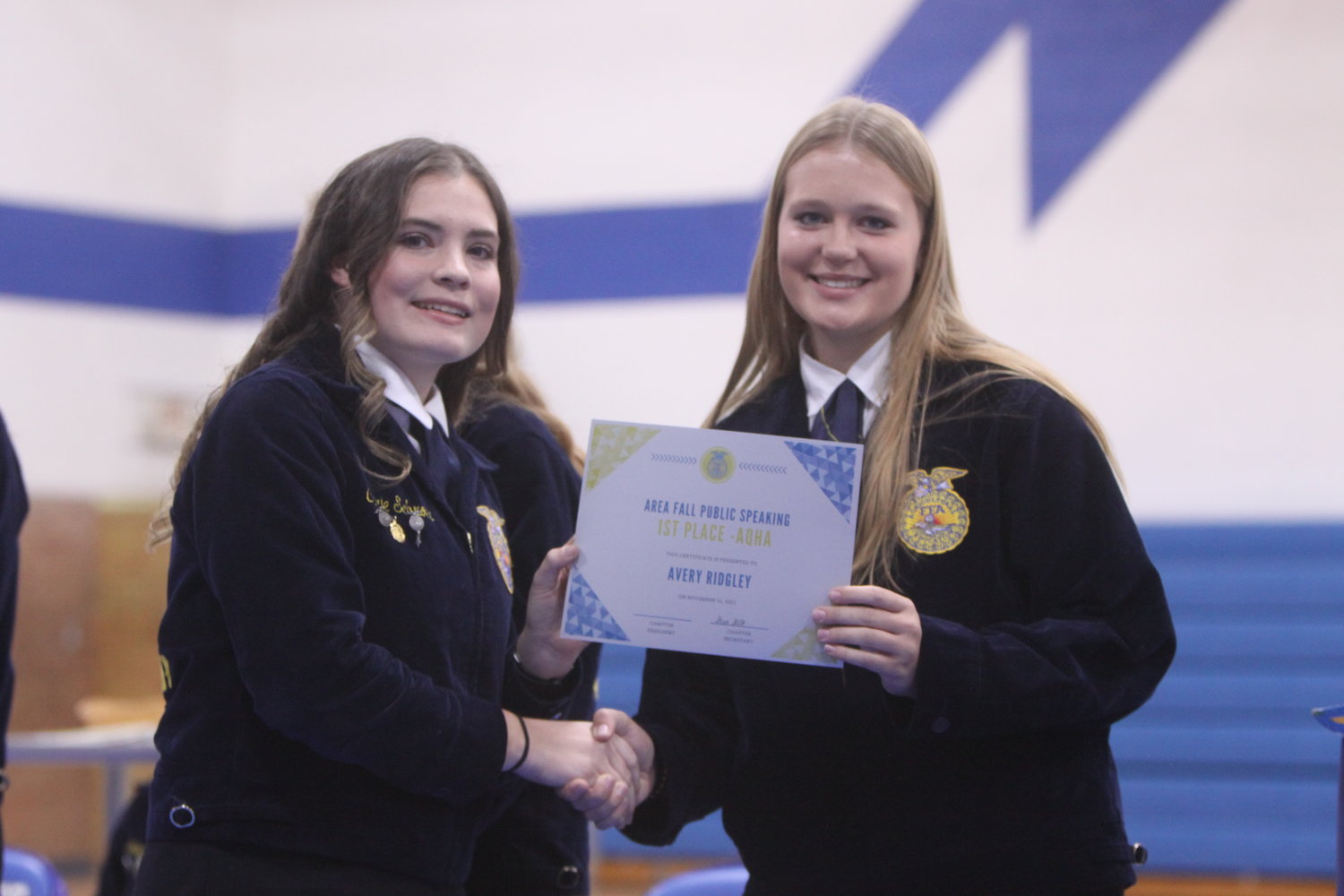 First, she was named one of the chapter officers. A week ago, she qualified for state competition in speaking after placing first in district competition. At the MCHS FFA Awards Ceremony on Nov. 16 at Ballew & Snell Court, she was one of 21 members to receive a chapter degree.

Ridgley was one of numerous members who were honored at the one-hour ceremony for their accomplishments during the last several months. Awards were given out for trapshooting, fruit selling, State FFA Camp and fall contests.

“It was really fun to see everybody get recognized for their accomplishments this year,” said Ridgley, who was a Greenhand degree recipient last year.

Also, Korrin Zerr and Izzy Foster, who graduated from MCHS in 2021, were recognized for receiving their American FFA degrees on Oct. 29 at the National Convention at Indianapolis. Senior Cora Johnson, the chapter’s president, was honored for competing in the FFA band for the second year in a row as well as being named Barnwarming Queen. Awards were given out to members who participated in the Montgomery County Fair, Missouri State Fair and Northeast FFA District Expo.

“I really like being an officer because we plan all kinds of stuff for the chapter and interact with the members,” Ridgley said.

Ridgley finished first in the American Quarter Horse Association category at the district speaking competition on Nov. 16. She was one of three members – the others were Johnson and senior Ahna Sinclair – who participated in districts.

Ridgley has an extensive background in horses. She worked with young horses and trained them for three years. Last year, she was one of 40 young students to be selected to the AQHA’s Ranching Heritage Young Horse Development Program.

Ridgley said she worked on her speech for about two weeks.

“I had to memorize it,” the sophomore said. “I did it in the Missouri Quarter Horse Association topic, which asked what sparked your interest in horses and how they impacted your life. So I talked a lot about my experience as a camp counselor and some of my personal stories.”

At the FFA ceremony, Ridgley was honored for her accomplishment by receiving a certificate from her chapter.

“That was really exciting because we got our Greenhands degree last year,” Ridgley said. “Now, we get our chapter degree. I hope to get my state degree in the future.”

Another sophomore, Beckham Cothren, also had a memorable time at the FFA ceremony, winning the FFA creed contest and being selected as one of the Greenhand degree recipients.

“I spoke first in my class,” Cothren said. “That’s how I got my free jacket. I was a little nervous, but it was fun. I already had it memorized. The creed is part of FFA. Everyone has to memorize it. It was nice to say in front of my friends and family that I have been working on it.”

The Greenhand degree is awarded to members ninth grade and older. After being named Greenhand degree recipients, Cothren and 32 other members had to get their hands dyed in green earlier in the day. All of them had to soak their hands in a bowl, which was mixed with hot water, vinegar and green food dye.

Cothren said he enjoys being a member of the FFA after two years.

“It’s really nice,” said Cothren, who also helped the Grasslands team place seventh in state. “I couldn’t fit it in my schedule in my freshman year. It’s a great group of people. They’re so involved in the community and I wanted to be part of it. I wanted to give back to the community, which has done so much for me.”

Stille, Poston and junior Aleida Eldringhoff were honored for selling the most fruit in the FFA chapter. Eldringhoff was first with $5,274, followed by Stille with $5,269 and Poston with $3,771.

“Honestly, it’s a lot of work, but our community is super giving and helps us out,” Stille said.