Korrin Zerr and Izzy Foster got a chance to wear their FFA uniforms one more time on Oct. 29.

The Montgomery County graduates donned their blue jackets, scarves and skirts to pick up a big honor … 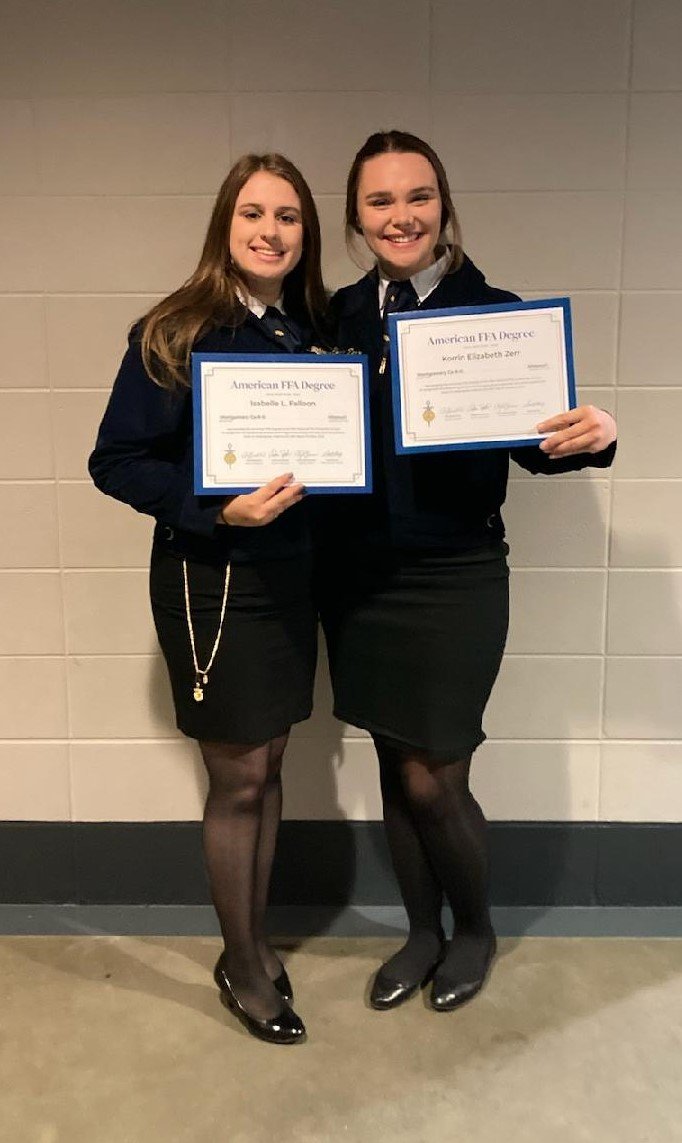 Korrin Zerr and Izzy Foster got a chance to wear their FFA uniforms one more time on Oct. 29.

The Montgomery County graduates donned their blue jackets, scarves and skirts to pick up a big honor at the National FFA Convention & Expo at Indianapolis. Zerr and Foster were among a long list of Missouri residents who received American FFA Degrees.

The last time Zerr and Foster wore their uniforms was during an end of the year FFA banquet in their senior year at MCHS on May 21, 2021. They hung up their uniforms after the event. Foster said she was ecstatic that she and Zerr got to wear their FFA apparel again at Indiana.

“You can really feel it when you’re putting it on because when I hung it up before, I was like, ‘Man, this is probably the last time I’ll ever hang it up,’” Foster said. “We didn’t really think that we would qualify for the American degree, so putting it on again was such an experience. It was something that you will never get to experience again, especially taking it off for the last time.”

“It was really exciting to be able to do it with some of the closest friends I know,” Foster said. “Us three kind of grew up together and did a lot of stuff together in high school and in ag class. We’ve always known each other at school. So it’s pretty cool to be able to do it with people you grew up with and people who stood beside you the whole time. It was really interesting to be able to walk across the stage and get to do this with them because you’re next to them and you grew up with them just as much as they grew up with you.”

The American FFA Degree is the highest honor anyone in the National FFA organization can achieve. It is awarded to an FFA member who showed outstanding leadership abilities and was highly involved in the community. Eligible candidates must receive a state FFA degree, be active in FFA for three years, complete instruction in an agricultural educational program and operate a supervised agriculture experience (SAE) program.

“There is actually only one percent of all FFA members who get their FFA degree,” Zerr said. “It meant quite a bit to me for the amount of time that I put into FFA and agriculture as a whole, knowing that this was something I wanted to continue doing after high school.”

Zerr said she was thrilled that she and Foster made their first trip to the FFA National Convention in three years.

“We were sitting down and there was a kid besides us who also got an award and pulled out a program from the national convention in 2019,” Zerr said. “It was kind of weird to see him pull that out because that was the last time we were there. When we were seniors, COVID happened, so we weren’t allowed to go to Indianapolis to meet as a big group.”

Zerr said she enjoyed her time with the FFA chapter at MCHS. When she was a senior, she was the chapter’s president.

“Being in FFA all throughout high school was really interesting because it got me to do extra things that I wanted to do,” Zerr said. “Instead of having to go to school and do math, science and reading, I got to do hands-on things in the ag department like making floral arrangements, working in the shop and building different structures. Being in FFA was a rewarding experience of getting to know that I was not only giving back to the community, but also getting to learn a lot about agriculture.”

During her senior year, Foster was the vice-president of the MCHS FFA chapter and helped a four-member agronomy team place seventh in state competition.

Foster said she was happy that she received her American FFA degree three weeks after she got married and two weeks after her birthday.

“I definitely had a busy October, that’s for sure,” said Foster, whose maiden name is Falloon.