When the Montgomery County Scholar Bowl team began its Eastern Missouri Conference season on Jan. 10 with matches against Van-Far and Wright City, five of the members decided to go formal. 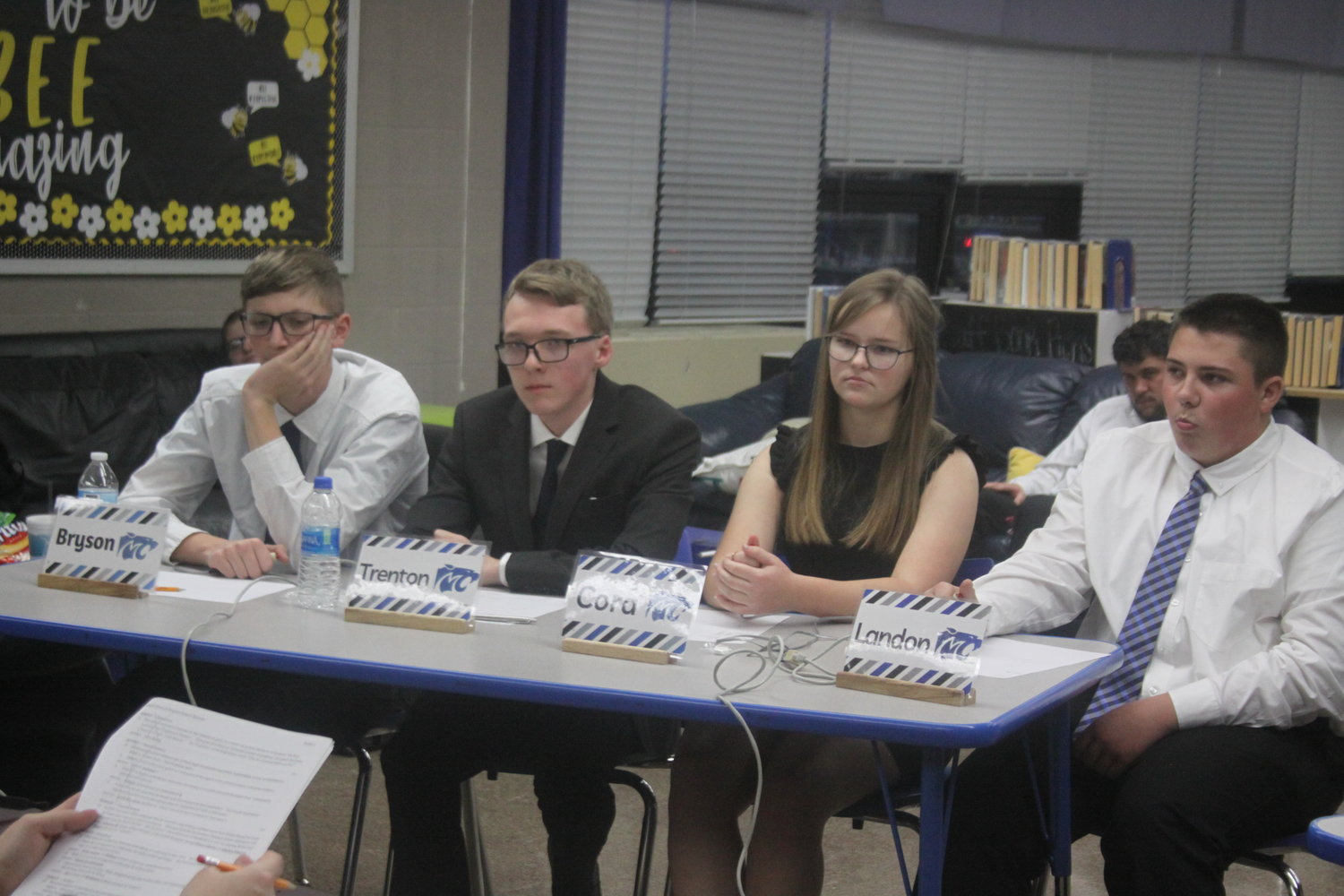 When the Montgomery County Scholar Bowl team began its Eastern Missouri Conference season on Jan. 10 with matches against Van-Far and Wright City, five of the members decided to go formal.

“We always dress our best to play our best,” Johnson said.

The formal attire definitely helped for MCHS as it cruised past Van-Far 380-40 and Wright City 320-20. Both matches were held at the school’s media center.

Johnson, Moose, Pottebaum and Nichols played in the varsity division, while Cothren competed in the junior varsity division. The JV team also pulled off the sweep in the triangular match against Van-Far and Wright City.

MCHS has nine members on its Scholar Bowl team, which is coached by Ben Creech. Freshmen Emily Clark and Dawson Kincaid-Huff and sophomores Jordan Hicks and Brendan Craven round out the squad.

“It’s a really big deal to have this many kids and have enough for a JV team,” Johnson said. “They love competing and we love introducing it to them.”

Johnson, Moose and Pottebaum are back from last year’s team that finished 20-15 overall and 6-4 in EMO play and reached the Class 3, District 5 semifinals.

“It feels amazing to be back,” said Johnson, who joined the team in her freshman year, but it was cut short due to the COVID-19 pandemic. “I’ve been competing with quiz bowls since fifth grade. It’s always been an amazing experience to be around people who enjoy academics as much as I do.”

Moose, who will be attending the University of Missouri-Kansas City next year, returns for his second year on the team.

“I wished I had known about it when I was a freshman,” Moose said. “I would have done all four (years). I really like it because I like doing niche areas like history and oddball stuff.”

The squad lost two members to graduation, one of them was Bryce Eoff, who earned three all-EMO and two all-district awards.

Pottebaum, who is back for his second year with the team, said he was influenced by Eoff to try out for the Scholar Bowl squad last year. He was the Wildcats’ substitute player.

“We had a tryout and I really enjoyed it,” Pottebaum said. “I remember doing it in elementary school.”

Nichols said he was excited about playing in the conference opener against Van-Far. He helped his team get a total of 38 questions correct, 23 of them were bonus questions.

“It was my first big conference game playing on varsity,” Nichols said. “Last year, I played on JV. It wasn’t too bad.”

“Before each meet, we have a lot of traditions,” Johnson said. “The outfits are our tradition. We dress nice for all of our conference bowls, even though the other teams dress casual.”

Johnson said she encourages more people to come to the matches. Her mother and two of her siblings were in attendance in the matches against Van-Far and Wright City.

“Not many people know about us,” Johnson said. “That’s why we dress up on these days to raise awareness and to get more people to join.”