After scoring 25 out of 25 during a practice session with the Montgomery County FFA trapshooting team on Aug. 29, Griffen Rakers decided to keep his hat on.

It’s a tradition for trapshooters … 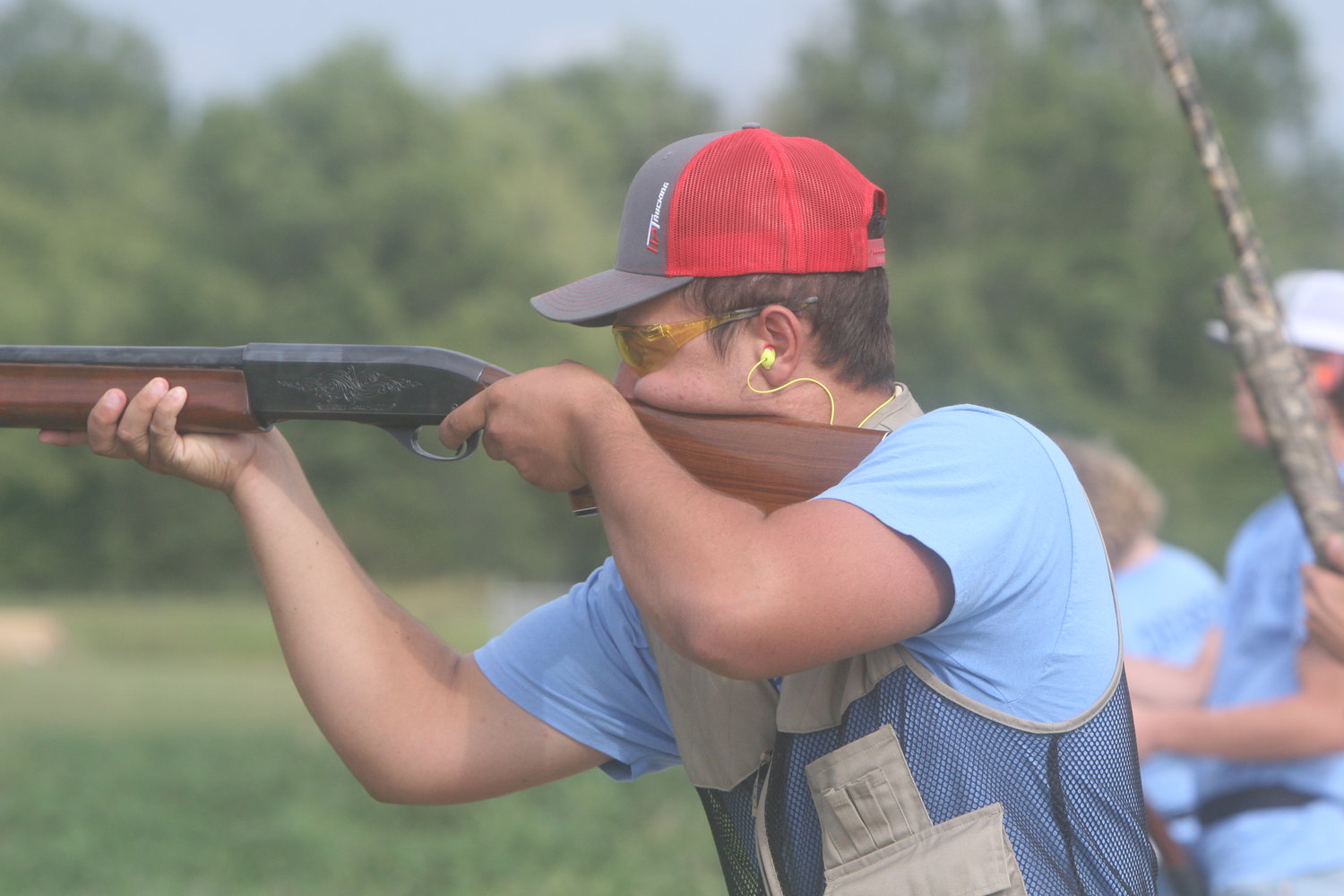 Montgomery County senior Griffen Rakers goes for a shot during a trapshooting match at Community R-6 High School on Sept. 6. Rakers scored 25 out of 25 during a practice session on Aug. 29.
Theo Tate photo
Posted Monday, September 19, 2022 3:38 pm
By Theo Tate

After scoring 25 out of 25 during a practice session with the Montgomery County FFA trapshooting team on Aug. 29, Griffen Rakers decided to keep his hat on.

It’s a tradition for trapshooters to get their hat tossed in the air by their teammates and shoot it after finishing with a perfect practice round.

But Rakers didn’t want any part of it.

“I had a brand new hat on, so I told (MCHS coach Amanda Sullivan) that I wasn’t shooting it,” the MCHS senior said.

Rakers became the second member of the MCHS trapshooting squad in two years to turn in a perfect practice session. Junior Levi Thurman did it last year.

“It was pretty good,” Rakers said. “I have never done it before. It was a good feeling.”

Sullivan said she was happy to see Rakers go 25-for-25 in his fourth and final year with the trapshooting team.
“It’s really exciting,” Sullivan said. “He’s been a really strong shooter all four years he has been with us. He will continue to be a great leader as a senior.”

Rakers first got interested in trapshooting in his freshman year after spending a lot of time going hunting with his father.

“When I got the opportunity to start shooting, I took it in and I started it,” Rakers said. “I wasn’t very good when I first started it. But as I have grown through the years, I have gotten a lot better.”

Sullivan said when Rakers was a freshman, he joined a team that had a lot of experienced shooters.

“During his freshman year, there was a lot of competition with older kids,” Sullivan said. “It’s hard to compete with the juniors and seniors sometimes. He kept coming out and kept improving every time. He’s been a strong shooter ever since.”

Rakers, who is in his second year with the ‘A’ team, has some advice for someone who wants to be successful in trapshooting.
“When you get ready to shoot, you don’t want to get real nervous or anything,” Rakers said. “You just want to be calm throughout. When you shoot, you want to follow through on your shot.”
Rakers has been a member of the MCHS FFA chapter since his freshman year. He said he enjoys learning about agriculture.
“It’s a lot of fun,” Rakers said. “We do a lot of stuff. I feel like we have gotten more and more kids through the years since I’ve been in FFA in high school. I think we’re getting more kids interacting with other people, just like trapshooting. We’ve got a lot of new shooters this year.”