Two years ago, Linda Eatherton created a six-and-a-half inch block of Graham Cave State Park to be put on the Missouri Bicentennial Quilt.

On the afternoon of Oct. 31, the Montgomery City resident … 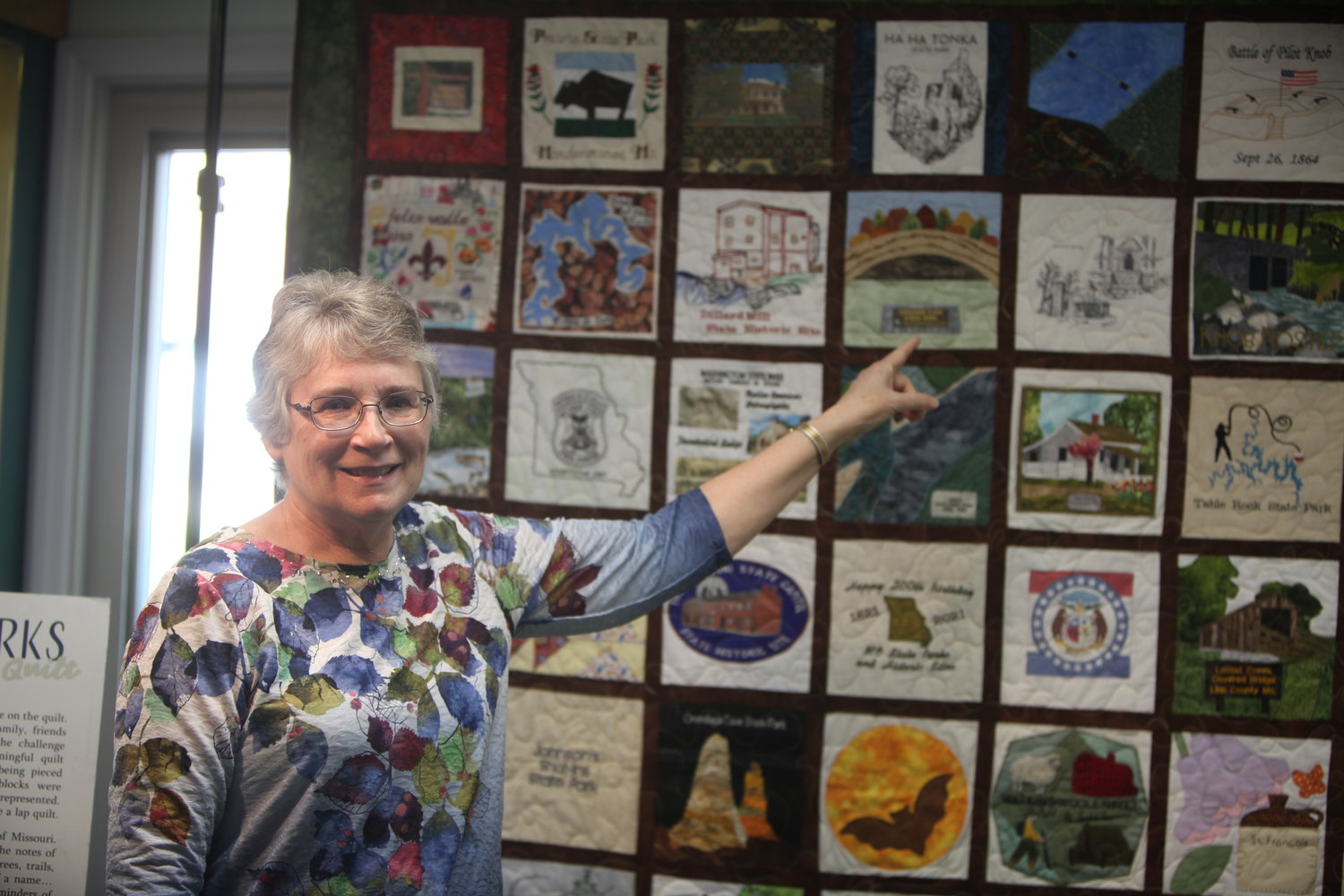 Two years ago, Linda Eatherton created a six-and-a-half inch block of Graham Cave State Park to be put on the Missouri Bicentennial Quilt.

On the afternoon of Oct. 31, the Montgomery City resident got a chance to see her Graham Cave block when she visited the Danville park to attend the Missouri Bicentennial Quilt display, which was held at the visitor’s center.

Eatherton saw the block in places such as the Deutschheim State Historic Site at Hermann and at the Missouri State Fair in Sedalia this year. She also saw the block on July 30, 2020, when the quilt was on display at the Montgomery City Public Library.

“It’s wonderful,” said Eatherton, who worked as a director at MCPL for 20 years. “I enjoyed seeing it again.”

The quilt has a block representing every Missouri county and the city of St. Louis and was created to celebrate the state’s 200th birthday. There are 121 blocks in the quilt.

“I think it’s very special,” Eatherton said. “It was special enough that I wanted a block in it. It is beautiful, and it shows the diversity of our state with all of the different blocks.”

The quilt was on display at Graham Cave for three days from Oct. 29-31 as part of an eight-month tour that started in May and will end in January. Its next stop is Felix Vallé State Park in Ste. Genevieve on Dec. 4-5.

Graham Cave Superintendent Cade Harp said he was happy that Eatherton made a Graham Cave block for the quilt. She started on it in the fall of 2019 after making a visit to the park with her husband.

“We’re excited and honored that Linda would do this for Graham Cave and for state parks,” Harp said. “We saw the one that she did for the county. That’s when I contacted her at that point, and I asked her if she could do this one. Of course, she was all excited.”

“The St. Charles City County Library hosted a Bicentennial Quilt sew-along last year in 2020, and I didn’t care about it until this year,” Eatherton said. “I started on it this spring, I had it finished by fair time and I got a blue ribbon on it at the fair.”

Eatherton has been making quilts for over 20 years.

“We had a program at the library about quilting,” Eatherton said. “We had so many people who were interested that we decided we would try a quilting group in town. So it started about 20 years ago. I made one quilt previous to that. That was the U.S. Bicentennial in 1976. It was the only quilt I made before I joined this quilt group. We learned to quilt together.”