After going to an air show in Oshkosh, Wis., three years ago, Jonas Uthe was determined to become a licensed pilot. 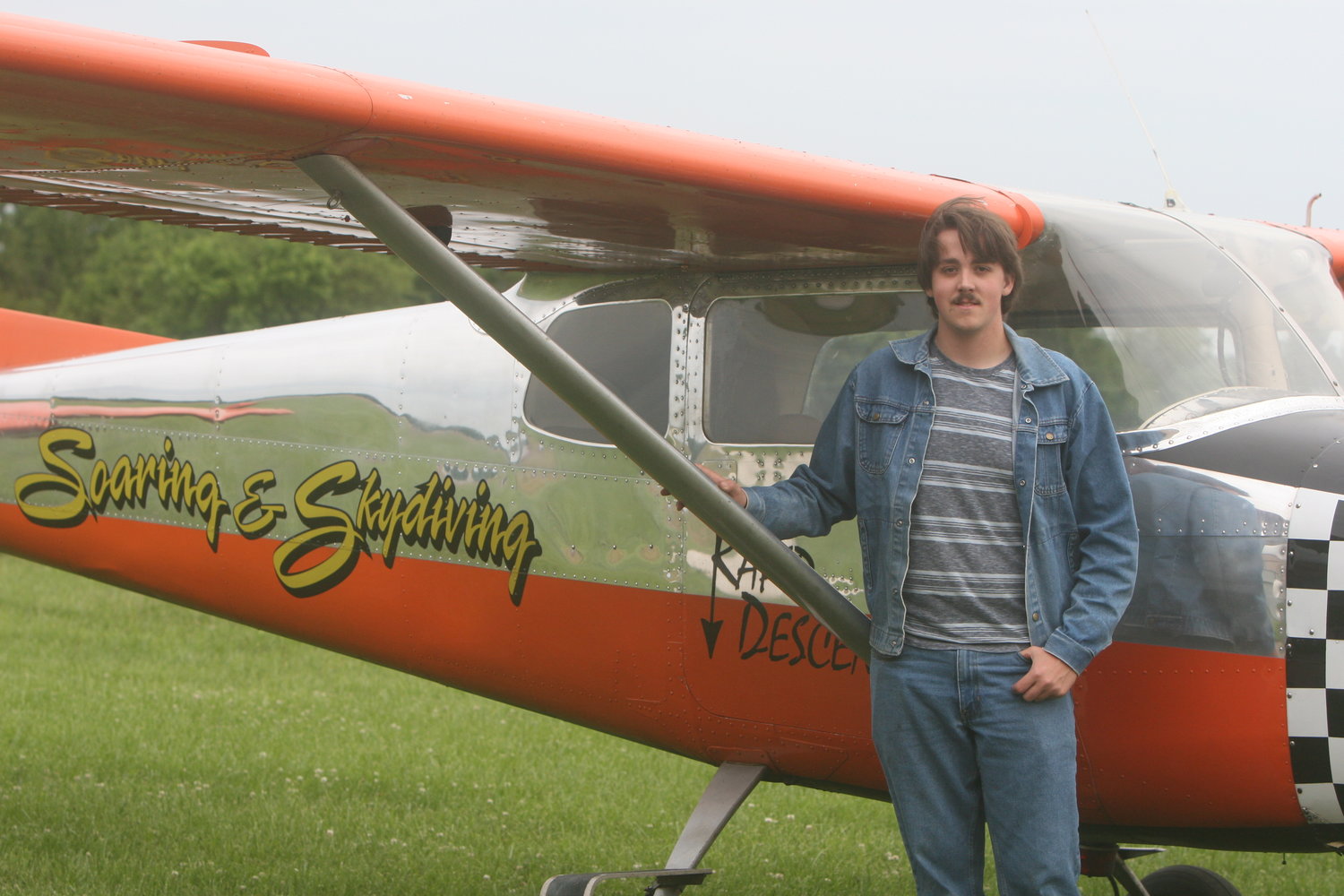 Montgomery County resident Jonas Uthe poses with his 1956 airplane at the back of U-Store-It in Montgomery City on May 23. The 17-year-old Uthe recently received his private pilot’s license.
Theo Tate photo
Posted Thursday, June 23, 2022 9:25 am
By Theo Tate

After going to an air show in Oshkosh, Wis., three years ago, Jonas Uthe was determined to become a licensed pilot.

Uthe’s dream of becoming a licensed pilot came true after he received his license in Ozark, Mo., in May, just months after getting his first airplane. He said he had a passion for flying for many years.

“I’ve been going to air shows,” Uthe said. “I thought it was cool to watch them play around. I went on a flight with Young Eagles when I was 9. Since then, I’ve been hooked. It’s a lot of fun.”

Uthe purchased a 1956 skydiving airplane in Perry, Mo., in September. He keeps it at U-Store-It, located off Highway B in Montgomery City.

“Baron Aviation may have had this airplane to begin with,” Uthe said. “Stephens College in Columbia had this airplane when it was brand new. It made it up to northern Missouri and made it to Iowa. Baron got it next and did a restoration to it and gave it a new paint job and set it up to do what it needed to do.”

Uthe said he was happy to get his first airplane.

“It’s like having a first car, but it has wings,” Uthe said.

Uthe, who lives between Wellsville and Montgomery City, is home schooled. He has no plans of going to college.

“I’m going to go to an aeronautical school and learn how to fly the fun stuff,” Uthe said.

Uthe said EAA Chapter 1387 in Troy has a Young Eagles program that gets any young boy or girl an opportunity to go flying on a general aviation airplane.

“Anyone from the age of 8-17 can take a free airplane ride for 20 minutes and get to explore aviation,” Uthe said. “It’s well worth it. It’s what got me here. If you join the chapter and start getting more involved there, then you might end up with a scholarship. I ended up with the Ray Foundation Aviation Scholarship.”

Uthe said both of his parents, Jim and Wendy, have flown with him.

“My dad said he always wanted to fly,” Uthe said. “Now that she has gone in an airplane with me, my mom is pretty comfortable with it. Beforehand, she really didn’t want me flying an airplane, even though she was the one who ended up finding all of the events and saying, ‘Hey, here’s where you can go get a free airplane ride.’ It worked out like that.”

Uthe had his first solo flight in May of 2021. Wendy Uthe said she’s proud of his son for being a licensed pilot.

“We want him to pursue his dreams and work towards a career where he doesn’t feel as though he is working because he has a passion for what he does,” Wendy said. “So many dread getting up and going to work, because they didn’t follow their passion. We support him in his endeavors.”