Erin and Casey Johnson spent the Fourth of July 2022 by doing something they have been doing for a long time – singing.

The Wellsville sisters sang numerous songs together in front of family … 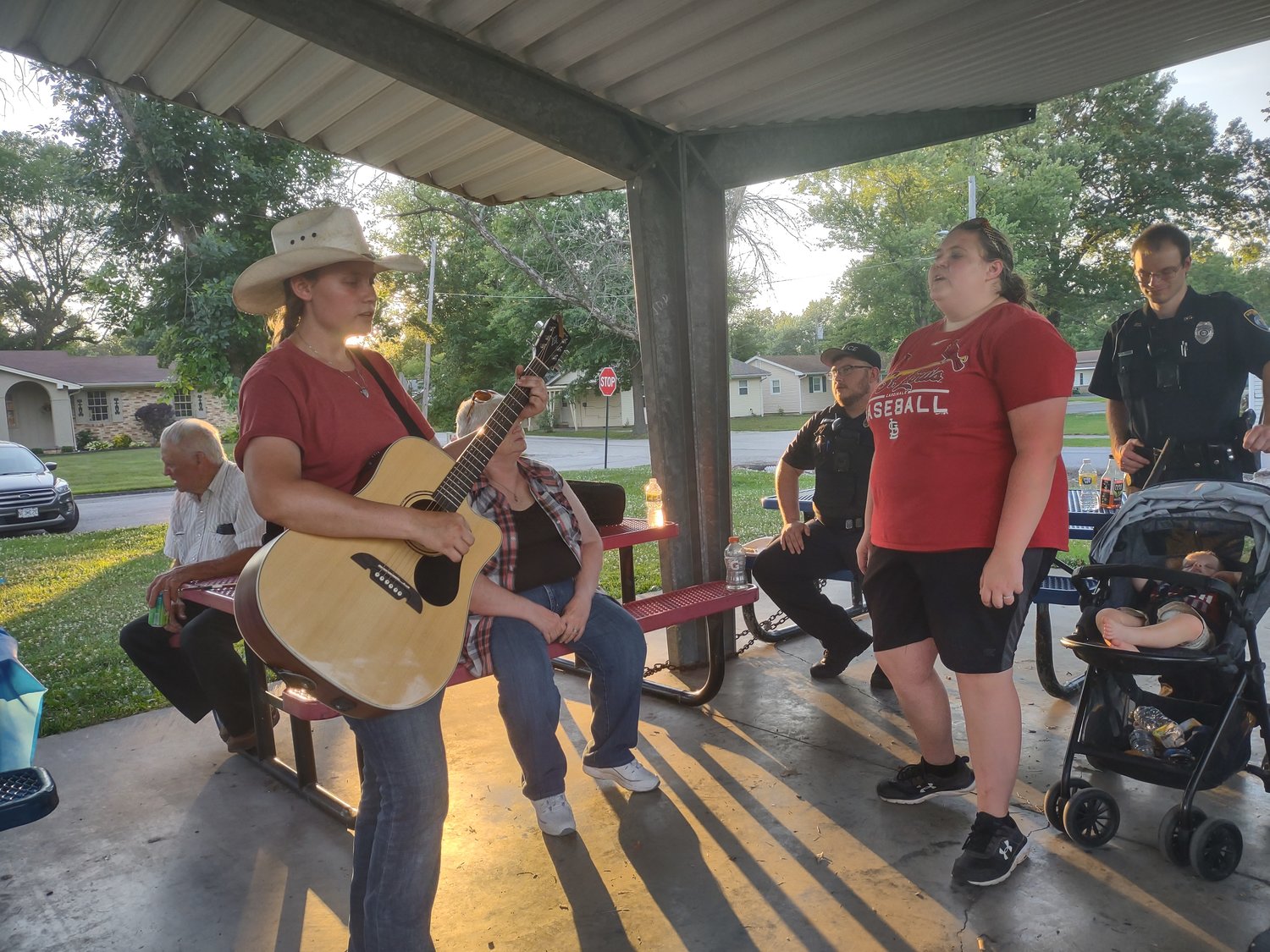 Sisters Erin and Casey Johnson perform under the pavilion at Norwood Park on July 4. They have been singing together for many years. They will be performing at the Old Threshers Show this weekend.
Theo Tate photo
Posted Thursday, August 18, 2022 9:36 am
By Theo Tate

Erin and Casey Johnson spent the Fourth of July 2022 by doing something they have been doing for a long time – singing.

The Wellsville sisters sang numerous songs together in front of family members and friends at a barbecue outing under the pavilion at Norwood Park in Montgomery City. Erin played the guitar, while Casey sang without an instrument.

Both sisters started singing when they were two years old. They have a combined 40-plus years of singing experience. They have been singing classic country songs such as “You Are My Sunshine,” “You Ain’t Woman Enough To Take My Man” and “Daddy’s Girls.”

“We goofed around with some little guitars that were just cheap and old,” Casey said. “Other than that, we just sang. We started singing classic country at two years old.”

The sisters grew up in a musical family that includes their grandparents, Harry and Jane Johnson.

“For us, it’s something that we can do with grandma and grandpa,” Erin said. “How many people get to say they grew up singing with their grandma and grandpa and not just singing at family get-togethers or singing on the couch, but you’re singing out in public? How many kids can say that they actually sang in a band from the time they were 2? We did. We were at every show that we had. Unless there was something drastically wrong, we were there.”

Last year, the Johnson sisters performed together at the Old Threshers Show. A CD was made from the performance.

“We have it both on DVD and CD now,” Casey said. “It’s cool to kind of relive those moments. It was one of the first shows we actually did by ourselves. It wasn’t the first one. We also had a show by ourselves in Vandalia last year and the year before. So it wasn’t our very first show, but it was the second show that we did by ourselves.”

This year, Erin and Casey will be performing at the Old Threshers Show again. They are scheduled to sing at 4 p.m. on Aug. 18 and at 4 p.m. on Aug. 19. They will also perform with family members on the evening of Aug. 19 and in the morning on Aug. 21. All of the performances will be held at the Montgomery County Fairgrounds.

“It’s exciting,” Casey said. “It’s something to look forward to. Knowing that we have our own shows is fun. It kind of makes all of the hard work that we put into it a real thing. Obviously, when you’re growing up, you think about that and you think about when you’re going to have those shows. It’s awesome to be living in that moment.”

The Old Threshers Show will be in its 45th year. There will be plenty of other attractions at the four-day event which starts on Aug. 18 and ends on Aug. 21 at the fairgrounds. The event will include steam engines, antique cars and trucks, gas engines, threshing tractor games, a flea market, a Dutch Oven contest, a parade that will start at 6 p.m. and run through Montgomery City and a church service.

“I always get excited for Old Threshers,” Erin said.

The Johnsons’ performance in last year’s Old Threshers Show was recorded by an aunt. Erin said a man from Mountain View, Ark., came up with the idea of putting together a CD of that performance.

“I like to go to Mountain View, Arkansas with grandma and grandpa,” Erin said. “We go down there to play music like country, gospel, bluegrass all of the time. Every night, you can go somewhere different and play music. So I like to go down there. Actually, there’s a guy there who does recording. He goes, ‘I want you to make a CD. If you can get me a CD, I’ll format it and everything.’ So he did all of the formatting and we reimbursed him for his time and effort.”

Erin, who graduated from Wellsville-Middletown High School in 2020, said she likes to play many instruments. Two years ago, she started playing the violin.

“We both started on guitar and we learned the basic chords,” Erin said. “I was about 8 when I learned the basic chords on the guitar. From there, I always kind of play the guitar, but when I was about 11-12, I started playing the mandolin. That’s when I played with grandma and grandpa’s band. All of the time, I started playing the mandolin more than I did anything so we would have enough guitars.”

Casey, who graduated from W-M in 2016, said she and her sister are singing for fun and have not made any plans of singing professionally.