When Wellsville-Middletown senior Logan Pursifull was introduced during the announcement of the starting lineup in a home game on Jan. 2 against Calvary Lutheran, Tiger fans were screaming with … 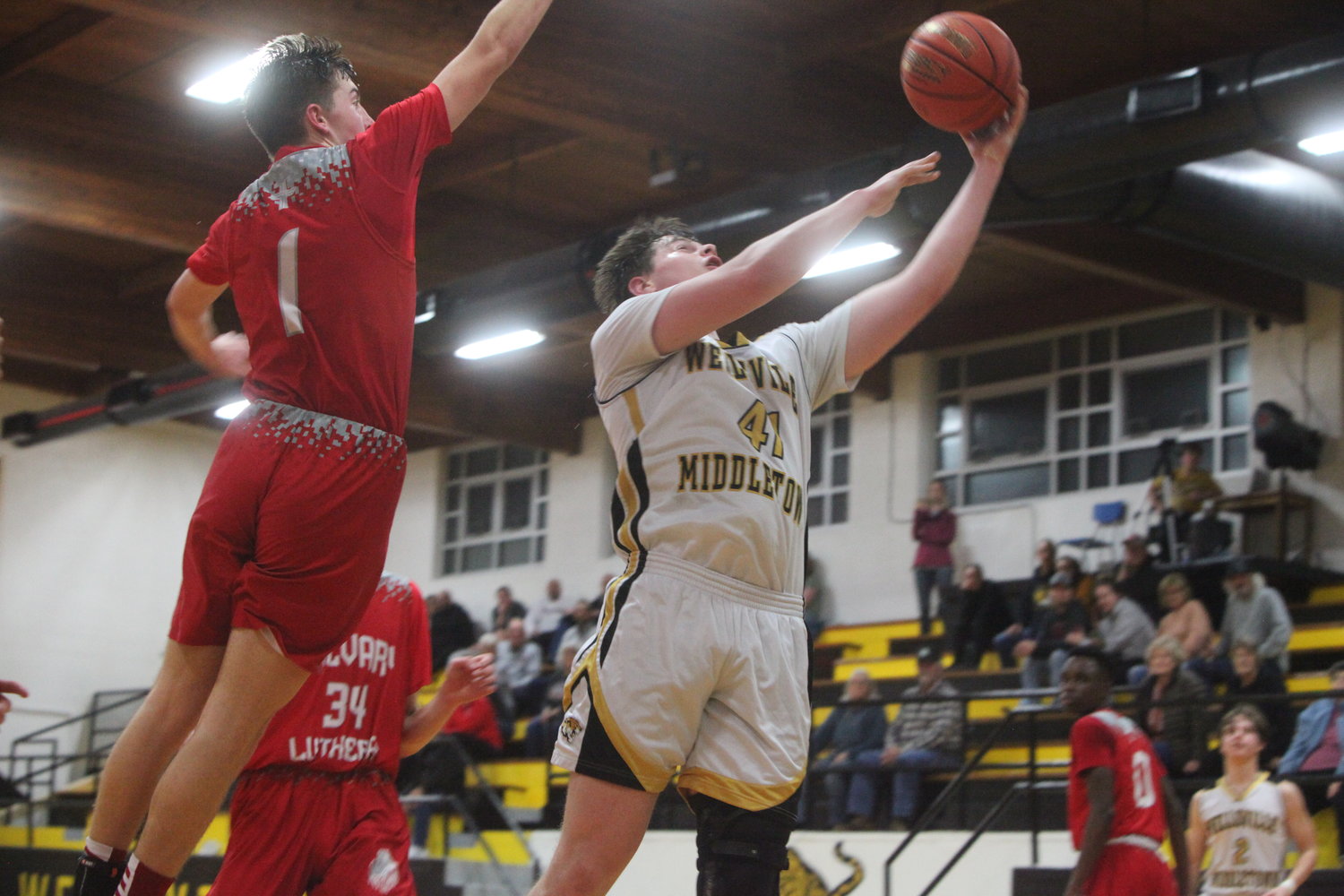 Wellsville-Middletown senior Logan Pursifull goes for a layup against Calvary Lutheran on Jan. 2 at the W-M gymnasium. He finished with 12 points and 11 rebounds in his first game back after missing two months due to a knee injury.
Theo Tate photo
Posted Thursday, January 12, 2023 9:25 am
By Theo Tate

When Wellsville-Middletown senior Logan Pursifull was introduced during the announcement of the starting lineup in a home game on Jan. 2 against Calvary Lutheran, Tiger fans were screaming with joy.

It was Pursifull’s first game back after missing the first two months of the season due to a torn left ACL injury.

“It’s been a long recovery, so I’m glad to be back,” Pursifull said.

Fans had another reason to celebrate when Pursifull scored the first basket of the game with 7:14 left in the first quarter. He rebounded a missed shot from senior Jacob Mandrell and followed with a basket.

The 6-foot-3 Pursifull turned in a strong performance in his first game of the 2022-23 season, scoring 12 points and grabbing 11 rebounds to help the Tigers pull off the 53-39 victory over Calvary Lutheran. It was the first game he played since the third-place contest against St. Elizabeth on March 12 in the Class 1 Show-Me Showdown in Springfield.

With Pursifull back, the Tigers will look to make another run to the state tournament. W-M has nine players and all of them return from last year’s team that won 20 games and finished fourth.

“We like to go out with a bang,” said Pursifull, who is part of a senior class that includes Mandrell, Dylan Alsop, CJ Curd and Lucas Moore. “That will be great for our senior season.”

The Tigers improved to 5-4 with the win over Calvary Lutheran, making it the first time this season they climbed over the .500 mark. They dropped to 5-5 after losing to Marion County on Jan. 9.

Pursifull received approval from the doctors that he could play after Christmas break.

“I’ve been practicing for about a half a month, doing everything contact and preparing for this game (against Calvary Lutheran),” the W-M senior said.

Last winter, Pursifull helped the Tigers make their first Final Four appearance since 1987 by averaging 10 points and six rebounds per game. He scored 17 points with three blocked shots in the Tigers’ win over North Shelby in the Class 1 quarterfinals that qualified them to Springfield. He also scored eight points and grabbed 12 rebounds in W-M’s loss to St. Elizabeth in the Class 1 third-place game.

“It was amazing,” Pursifull said. “It was one of the greatest moments of my life. I want to go back so bad this year. That’s our goal this year.”

A month after the Final Four, Pursifull tore his ACL while doing a crossover dribble during a game at a traveling league. He got surgery on April 13.

“I got up and I started walking on it,” Pursifull said. “But as I moved, I was limping a little. It was going side to side. It wasn’t very stable. My mom took me to the hospital and they found out a few weeks later that I tore my ACL.”

Pursifull missed the first eight games of the season, including the Pink Out game against Montgomery County.

“It was hard,” Pursifull said. “Some of the refs came up to me and they said they hoped I would come back soon. Some of the coaches came up to me. It’s hard sitting on the bench, but I’m back now.”