For a long time, Destiny Shaw has been battling with asthma.

So whenever she competes in a cross country race, the Montgomery County junior makes sure she has an inhaler with her. 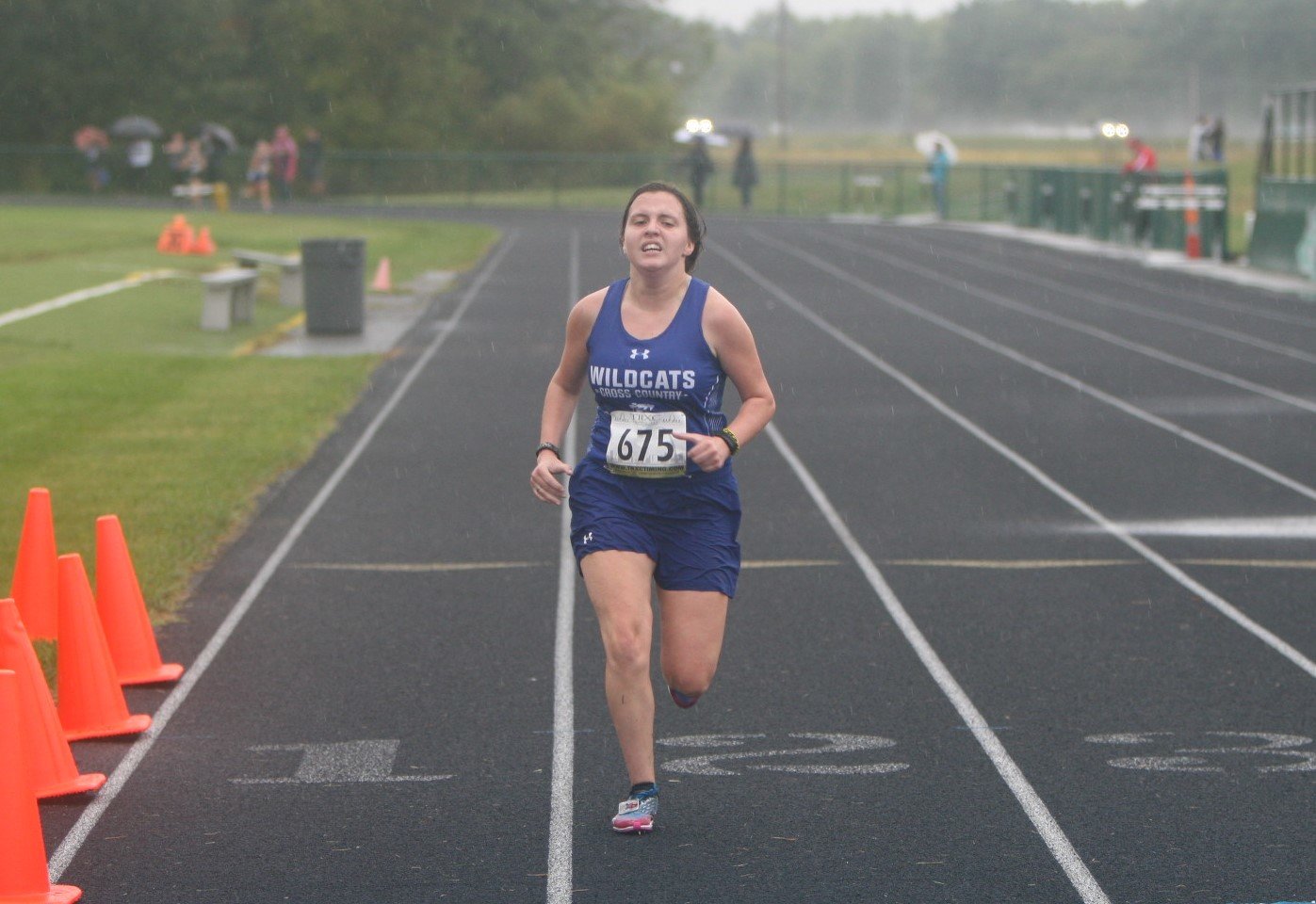 Montgomery County junior Destiny Shaw crosses the finish line in the girls race of the North Callaway Invitational on Oct. 2. Shaw is the No. 3 runner on the MCHS girls team.
Theo Tate photo
Posted Thursday, October 14, 2021 10:12 am
By Theo Tate

For a long time, Destiny Shaw has been battling with asthma.

So whenever she competes in a cross country race, the Montgomery County junior makes sure she has an inhaler with her.

“It helps me breathe,” Shaw said.

Shaw started carrying an inhaler during meets when she joined the cross country program in seventh grade. Despite the asthma issues, Shaw always looks forward to competing against a large crowd of runners in every meet.

“I just really like it,” Shaw said. “I wouldn’t trade it for anything.”

So far, Shaw is enjoying an outstanding career with the Wildcats that includes several medals, a trip to the Class 3 state meet and an all-Eastern Missouri Conference award. This year, she is the Wildcats’ No. 3 runner behind junior Lyric Ford and sophomore Malia Rodgers.

“She works so hard,” Ford said.

Shaw turned in her best performance of the 2021 season on Oct. 2, placing seventh with a season-best time of 22 minutes, 17 seconds under rainy conditions at the North Callaway Invitational. She came up just 26 seconds shy from her career-best mark of 21:51 she set at the Class 3, District 3 meet last year at Bowling Green that qualified her to state.

“A lot of us did really good,” Shaw said. “I’m really happy with how we did. It was raining, but we ran through it anyway. It doesn’t really bother us. It’s a flat course, but it’s a good course to PR in.”

Now, Shaw is hoping for bigger and better things for her team as its season comes down to its final weeks. The Wildcats will be competing at the Eastern Missouri Conference meet at 9 a.m. on Oct. 16 at the Pike County Fairgrounds in Bowling Green. They will compete in the Class 3, District 3 championship meet at Linn on Oct. 30.

“We want to win conference and districts,” Shaw said. “Hopefully, we’ll go to state. We really have been focusing on that.”

Shaw’s last visit to the Pike County Fairgrounds on Oct. 31, 2020 was a memorable one. She became one of five MCHS runners to clinch a berth to the Class 3 state meet in Columbia after placing 14th with a personal-best time of 21:51 at the District 3 championship meet at Pike County Fairgrounds. It was the first time in her high school cross country career that Shaw qualified for state.

“Just knowing that I made it to state was a lot of fun,” Shaw said.

Shaw finished her sophomore season with five medals, including a season-best, eighth-place finish at the EMO championship meet, which was also held at Bowling Green.

This year, Shaw has earned two medals. Besides the one at the North Callaway Invitational, the junior also picked a medal at the Linn Invitational on Sept. 11 after placing 28th.

Shaw’s best highlight of the 2021 season came on Sept. 18, when she was one of seven Montgomery County runners who competed at the Missouri Southern Stampede in Joplin.

“We had a lot of fun,” Shaw said. “We did a lot of fun things, like being together and watching the college races. I think most of us are going to be college runners in the near future.”

Shaw earned a trip to Joplin after running a 23:53 at the season-opening New Haven Invitational on Sept. 4.

“It felt good to run under 24 because that’s kind of a varsity level thing,” Shaw said. “To break 24 in my first meet was a lot of fun, especially since it was the first meet. I didn’t run that fast last year at New Haven.”