Montgomery County senior Drake Smith got a nice round of applause when he entered with 3:08 remaining in the first quarter of the third-place game against New Haven in the Montgomery County … 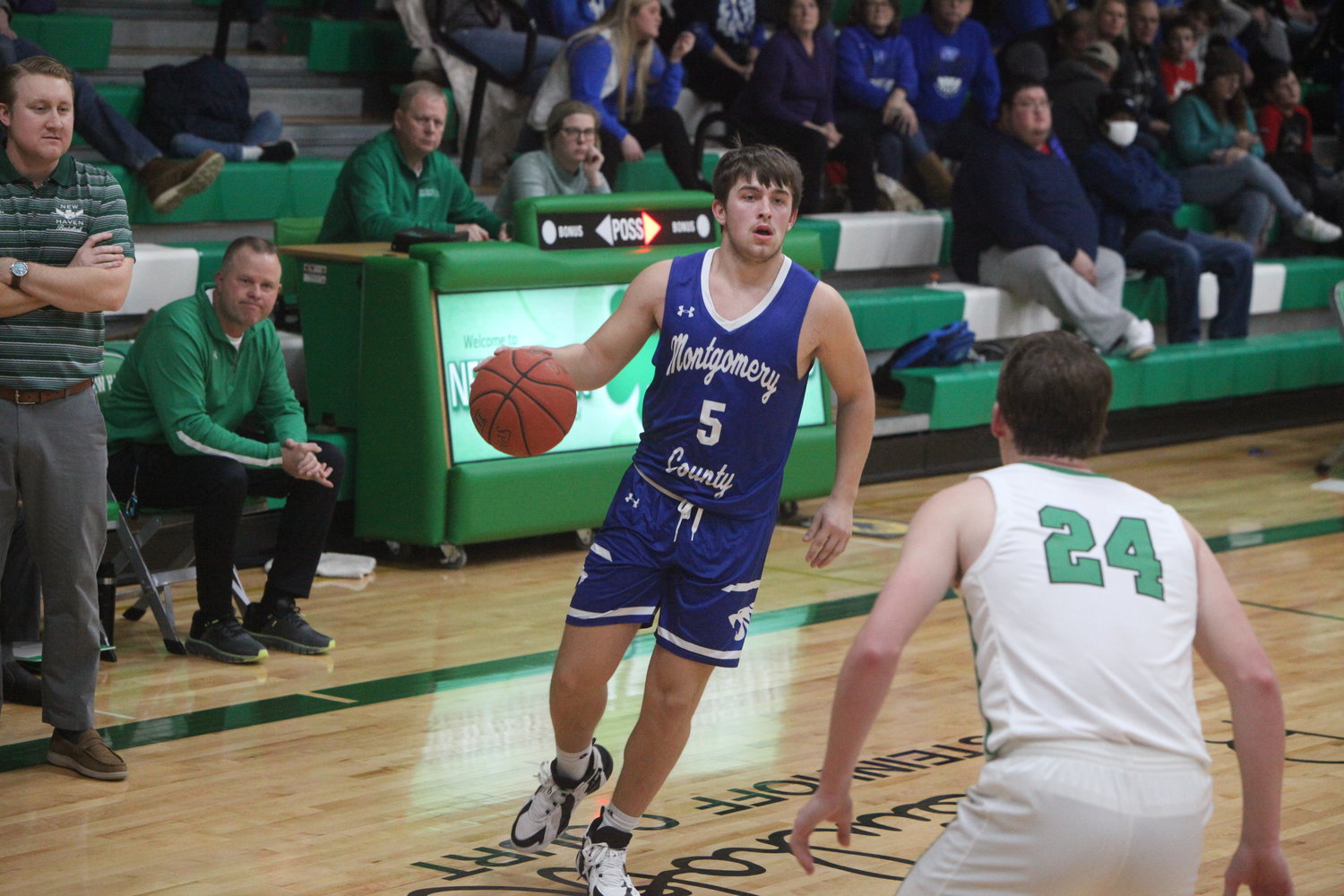 Montgomery County senior Drake Smith dribbles the ball against the New Haven Shamrocks on Jan. 7. Smith returns to the Wildcats this winter after turning in a strong junior season that included all-conference and all-district awards.
Theo Tate photo
Posted Thursday, January 20, 2022 10:14 am
By Theo Tate

Montgomery County senior Drake Smith got a nice round of applause when he entered with 3:08 remaining in the first quarter of the third-place game against New Haven in the Montgomery County Invitational on Dec. 4.

Smith was in action for the first time this season after missing the first three games of the basketball season due to an elbow injury.

“I didn’t think I was going to come back until January,” Smith said. “I was pretty excited to come back in the fourth game of the season.”

Smith became more excited when he scored on a conventional three-point play with 2:34 left in the second quarter that started a 22-3 run to help the Wildcats pull off the 59-44 victory over the Shamrocks.

“I felt pretty good,” Smith said. “I was nervous because I didn’t know exactly what I could do. For someone a little out of shape, it wasn’t too bad.”

Smith is back for his fourth and final season with the Wildcats. A year ago, he enjoyed a memorable junior season that included all-Eastern Missouri Conference and all-district honors.

“I didn’t do a bunch of scoring, but I did all of the right things, like being a role player and knowing what I was supposed to do and playing for the team more than playing for myself,” Smith said.

During football season, Smith injured his right elbow in a Week 3 game against Bowling Green, forcing him to miss the rest of the year and putting his hopes of playing basketball in jeopardy.

“During football season, I didn’t think I was going to miss any basketball. I went and got an MRI done,” Smith said. “It came back that I was fine. I just needed to go to rehab. Then, I had a CT scan and it came back that I had a broken bone and that I had to get surgery. I was like, ‘Well, hopefully I’ll come back for basketball.’ ”

Smith missed the Wildcats’ season opener against Winfield and their first two games of the MCHS Invitational before returning against New Haven. The senior said he was happy that his elbow is back to normal.

“Physical therapy helped a lot,” Smith said. “Trying to dribble a basketball was a big part of it. I was trying to get the motion back and trying to straighten my arm all the way to shoot. Just dribbling at practice helped a lot after going to physical therapy.”

MCHS coach Scott Kroeger said he was thrilled to see Smith return to the court on Dec. 4.

“We were certainly all concerned that we weren’t going to have him for sure until halfway through January,” Kroeger said. “So the fact that he came back so early was a big plus. I’m super happy to see him out there as a kid and as a person. Obviously, I’m happy as a coach because he’s a good player. He’s a big deal.”

Smith turned in several strong efforts this season, including an 11-point effort in a 37-36 loss against New Haven on Jan. 7. In that contest, he had a chance to win the game as time expired, but his 3-point attempt bounced off the rim.

“He could shoot the ball really well,” Kroeger said. “I asked him for four years to shoot the ball more. He’s been one of my best three-point shooters since he was a freshman. He’s always tough on that end.”

Smith has been playing basketball since third grade. He won a varsity spot with the MCHS program when he was a freshman.

“I’ll definitely be sad when it’s over,” said Smith, who plans to attend State Technical College next year. “But it’s been a pretty fun four years playing under Kroeger and all of my friends.”