Ever since she started her business, Varsity Ink, in 2019, JJ Rodgers has made so many T-shirts.

The Montgomery City resident has about 10 racks of T-shirts in her trailer, which she bought last … 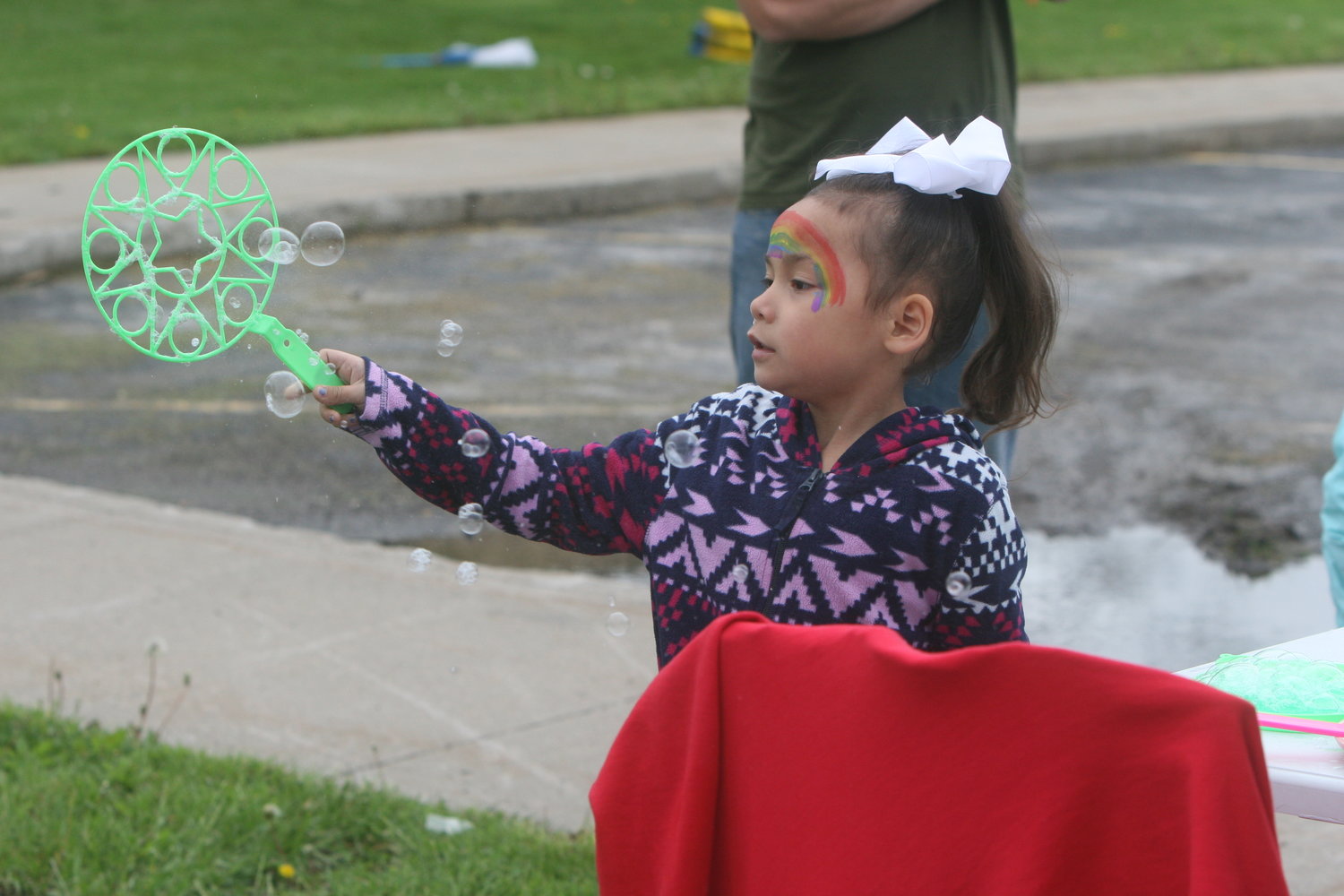 Jayda Svay, 6, plays with bubbles at the First Annual Summer Kickoff on April 30 in Montgomery City. The event was hosted by the Montgomery County Sheriff’s Department.
Theo Tate photo
Posted Monday, May 9, 2022 8:13 am
By Theo Tate

Ever since she started her business, Varsity Ink, in 2019, JJ Rodgers has made so many T-shirts.

The Montgomery City resident has about 10 racks of T-shirts in her trailer, which she bought last year.

Rodgers recently made another batch of T-shirts, this time it was for the First Annual Summer Kickoff, which was held on April 30 on Third Street in Montgomery City. The event was sponsored by the Montgomery County Sheriff’s Department and it was part of Autism Awareness Month.

The event, which started at 10 a.m. and lasted for several hours, had craft vendors, outdoor games and food trucks.

“We wanted to do the Summer Kickoff because we’re kicking off the summer,” Feger said. “It’s getting ready to be around the corner just before we know it. With April being Autism Awareness Month, we thought now was a better time to do it.”

“The community always comes out and supports our local law enforcement, which is cool,” Rodgers said. “As for the money that I’m raising, I’m donating 100 percent back to the Sheriff’s Department. I will pick out individual clubs here in town that deal with disabilities. So I’ll do half and half between those two.”

For three years, Rodgers has attended many craft fairs and other events. She went to a Christmas event in Monroe City. She plans to go to another event on May 6 in Wright City.

“I’ll go anywhere and everywhere,” Rodgers said. “Anywhere I can.”

“It’s going really well,” Zerr said. “This is the first time I’ve actually got out, went to a place and got to sell them. It’s really cool.”

Feger and Chief Deputy Dan Gevermuehle were the main coordinators of the Summer Kick Off. Feger said the event gave the children an opportunity to meet with the fire fighters, police officers and tow truck drivers.

“Sheriff (Craig Allison) and I have a big philosophy of community policing,” Feger said. “I came from a department where we did a lot of these events. He and I kind of collectively came together and thought that we need to do something to bring our agencies together. Ultimately, we’re one team and we have one goal.”

The Sheriff’s Department started planning on the Summer Kickoff during the winter.

“It took a lot of time,” Feger said. “We had all of these resources to schedule in. We had to reach out to each department. We had to hand out flyers. Those had to be pre-planned along with the food trucks, all of these craft vendors and street games. We had the A+ program from (Montgomery County High School). With this being a free event, everyone was donating their time to come out and do this.”

Allison said the department was determined to do the event since Sergeant Alex Brant has a son, Alexander, who is autistic.

“During his whole time growing up, he was in the department a lot, so he was like a second family to us,” Allison said. “We would be watching little Alexander. He was a hoot. Some of the things he would say were so funny. He’s a very loving kid.”