Taren Justice and Abbigail Kleinsorge had reason to be thrilled on Nov. 16. 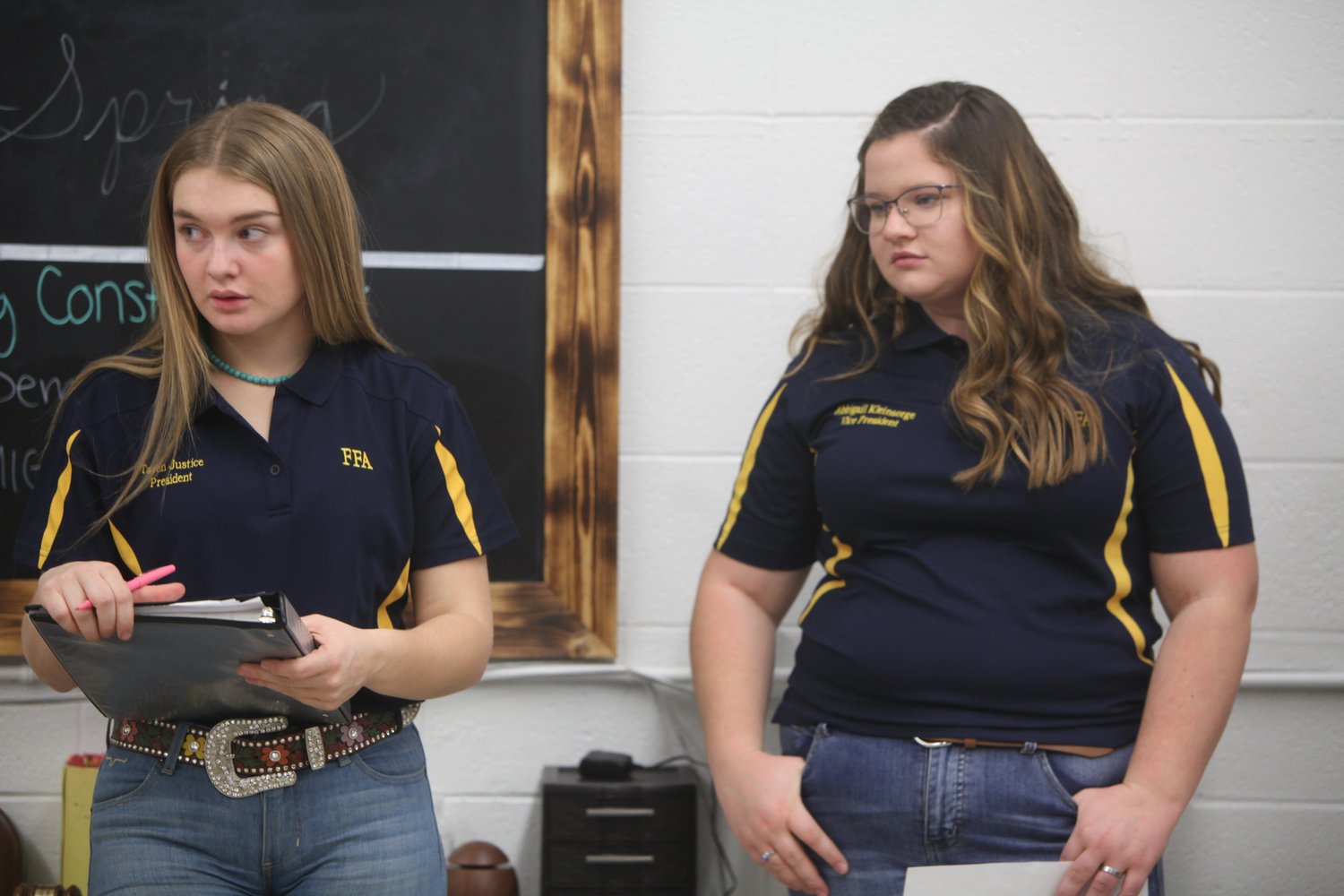 Taren Justice and Abbigail Kleinsorge had reason to be thrilled on Nov. 16.

The Wellsville-Middletown seniors represented their Future Farmers of America group at the District Fall Public Speaking Contest at South Shelby High School. Justice was selected as an alternate for state competition, while Kleinsorge competed in districts for the first time.

Kleinsorge and Justice qualified for districts after placing first in their respective divisions at the Area V Fall Public Speaking Contest on Nov. 10 at Bowling Green.

Kleinsorge’s three-page speech was on the Missouri Cattlemen’s Association.

“You have to memorize the whole thing,” Kleinsorge said. “No note cards or anything. Just a lot of repetition going through it.”

Justice, who is the president, had a four-page speech on the Missouri Quarter Horse Association.

“Mine was four pages because I talk fast,” Justice said. “I got a late start on it, but it did take a lot of work. I know I worked on it multiple hours a day in class with Mrs. (FFA co-advisor Emily) Brune or out of class. I said it constantly. It takes a lot of work.”

Justice and Kleinsorge also participated in public speaking competitions when they were freshmen and sophomores. Justice said she has improved tremendously from her freshman year.

“I noticed as a freshman that I was very nervous,” Justice said. “It was very nerve-racking. Through all of the different clubs and organizations, especially FFA, I have kind of grown out of my little comfort box. It was something I absolutely enjoy, being able to stand up, having people listen to me and to hearing them say, ‘Wow, you’re so confident.’ Inside, I was shaking and nervous. But to know that I was able to portray that I was confident, it was something I found really interesting.”

Kleinsorge said she was happy that she and Justice were the Wellsville-Middletown representatives at district competition.

“They’ll ask you to tell them the name of your school,” Kleinsorge said. “Both of us practiced our introductions and they both started with, ‘We proudly represent Wellsville-Middletown.’ I honestly feel that way. I’m proud to represent our small school and see how far we actually can go.”

“I absolutely enjoy it,” Justice said. “Coming into this, I wasn’t really sure I may not be the person they could look up to, especially running meetings and being able to see that they’re all just watching me. It’s an amazing feeling to know that I am in charge of leading this pack with two great advisors to lead me.”

The FFA members held a Thanksgiving dinner on Nov. 18 at W-M. They also went to the FFA National Convention on Oct. 27-30 at Indianapolis and held a Barnwarming dance on Oct. 23.

“The biggest thing we’ve done so far this year is Barnwarming, which was a really big deal for us,” Kleinsorge said. “We had 51 people in attendance. We also invited other kids from the school, not just FFA members. We had homemade fried chicken, fried potatoes and all of those good fixings. All of the members brought in homemade desserts. We all did line dances and we got to decorate together as a committee. It was super great.”