When Montgomery County senior quarterback Adam Czerniewski scored a 49-yard touchdown run with 8:44 left in the third quarter on Sept. 16 against Mark Twain at Jim Blacklock Field, he gave his team … 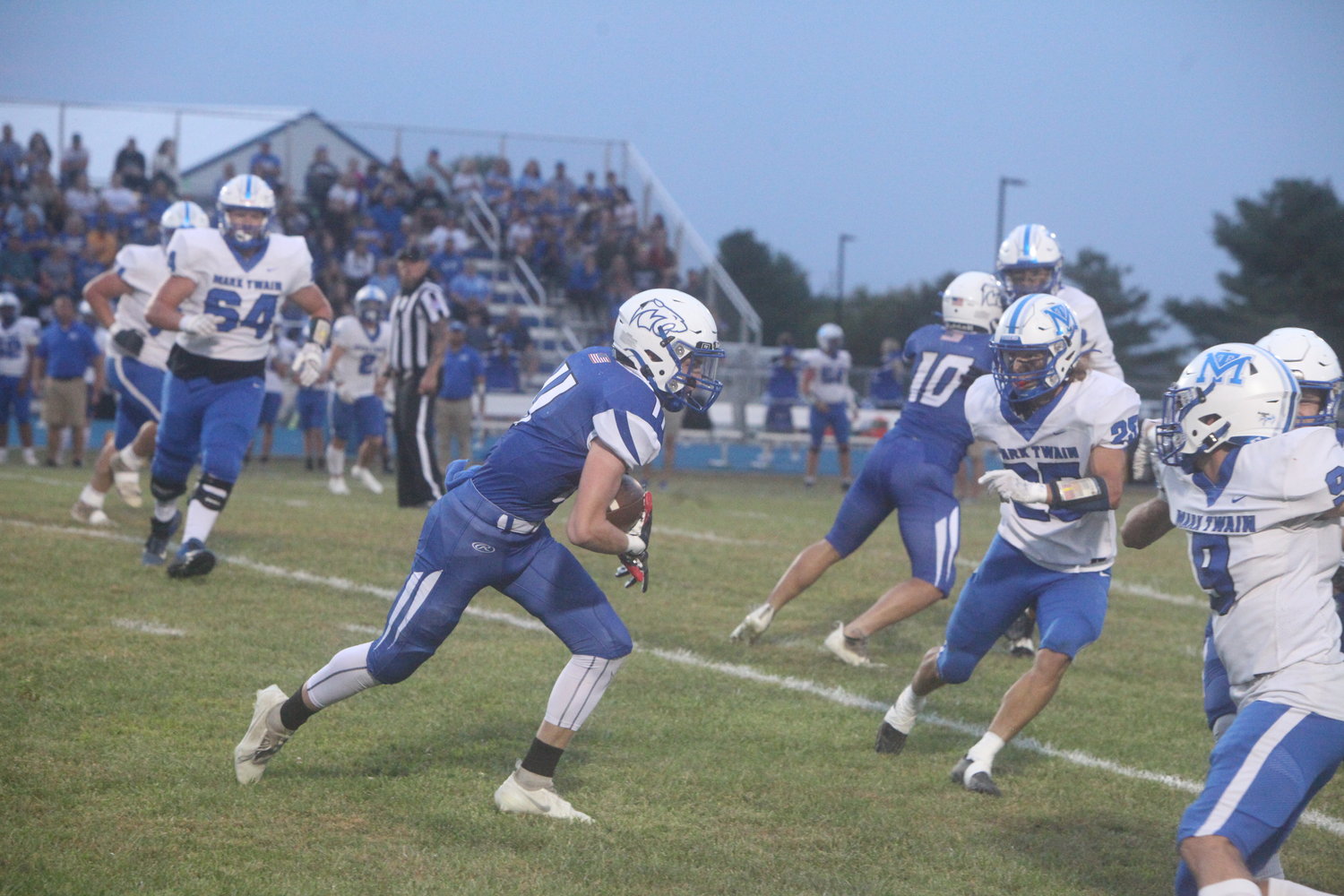 Montgomery County junior Weston Marshall carries the ball against Mark Twain in the first quarter on Sept. 16. Marshall and the Wildcats lost 50-18 to the Tigers.
Theo Tate photo
Posted Friday, September 23, 2022 9:43 am
By Theo Tate

When Montgomery County senior quarterback Adam Czerniewski scored a 49-yard touchdown run with 8:44 left in the third quarter on Sept. 16 against Mark Twain at Jim Blacklock Field, he gave his team something it never had all year – a lead in a ballgame.

The Wildcats took an 18-14 lead on Czerniewski’s long TD run and had hopes of celebrating their first win of the season.

But Mark Twain squashed those hopes by scoring 36 unanswered points to pick up a 50-18 win over MCHS. It’s the Tigers’ second straight win over the Wildcats.

MCHS dropped to 0-4 overall and 0-2 in Eastern Missouri Conference play. It’s the Wildcats’ worst start since 2015, when they finished 0-10.

“I think a lot of boys are probably disappointed,” MCHS coach John Klekamp said. “I know I’m pretty disappointed in a lot of things with the way things are going. But we have to figure it out together.”

MCHS will look to get its first win of the season at 7 p.m. on Sept. 24, when it travels to Bowling Green. The Bobcats are 4-0 and have defeated the Wildcats in each of the last two meetings.

“It doesn’t get any easier,” Klekamp said. “We’ve got probably one of the best teams in the area at their home field for homecoming. We have to figure some stuff out in practice and try to do our best to come up with a game plan for Bowling Green.”

The Wildcats had a hard time stopping Mark Twain senior running back Lakoda Preston as he scored five touchdowns.
“He made a bunch of big plays and that was the difference in the ballgame,” Klekamp said. “At times defensively, we stuck him and forced them (Mark Twain) to punt, but we gave up big plays. When you give up big plays, you’re not going to win very many football games.”

The Wildcats had the ball on first down and 27 when Czerniewski scored his 49-yard TD run in the third quarter to give MCHS the four-point lead. The senior now has four touchdowns this season.

“He showed a lot of guts and a lot of will,” Klekamp said. “He’s a great leader for us and works hard.”

Jaxen Lake scored a 64-yard touchdown catch with 7:45 left in the third quarter to give Mark Twain a 20-18 lead. Then, the Tigers got three touchdowns from Preston and a touchdown from Hunter Vasel to finish with their highest scoring output of the season.

“They made way more plays than we did,” said Klekamp, whose team has given up an average of 34 points per game. “I don’t think the score was totally indicative of what the game was, especially in the first half and the start of the second half. But they did run away from us.”

MCHS senior Gunner Sexton, an all-EMO selection on offense last year, played his first game of the season and made several key defensive plays, including a sack on third down in the second quarter.

The Wildcats lost a key lineman, junior Connor Finke, to injury in the first half.

“Connor Finke is an all-district performer,” Klekamp said. “Losing him up front definitely affected us. They (Mark Twain) got one of the better defensive linemen in our conference, which is the (Coleman) Epperson kid at nose guard. Connor would have been able to help us handle him a little bit better in the second half.”