A year ago, the Wellsville-Middletown baseball team knocked off the Glasgow Yellowjackets 10-0 in a Class 1 sectional game in Columbia. 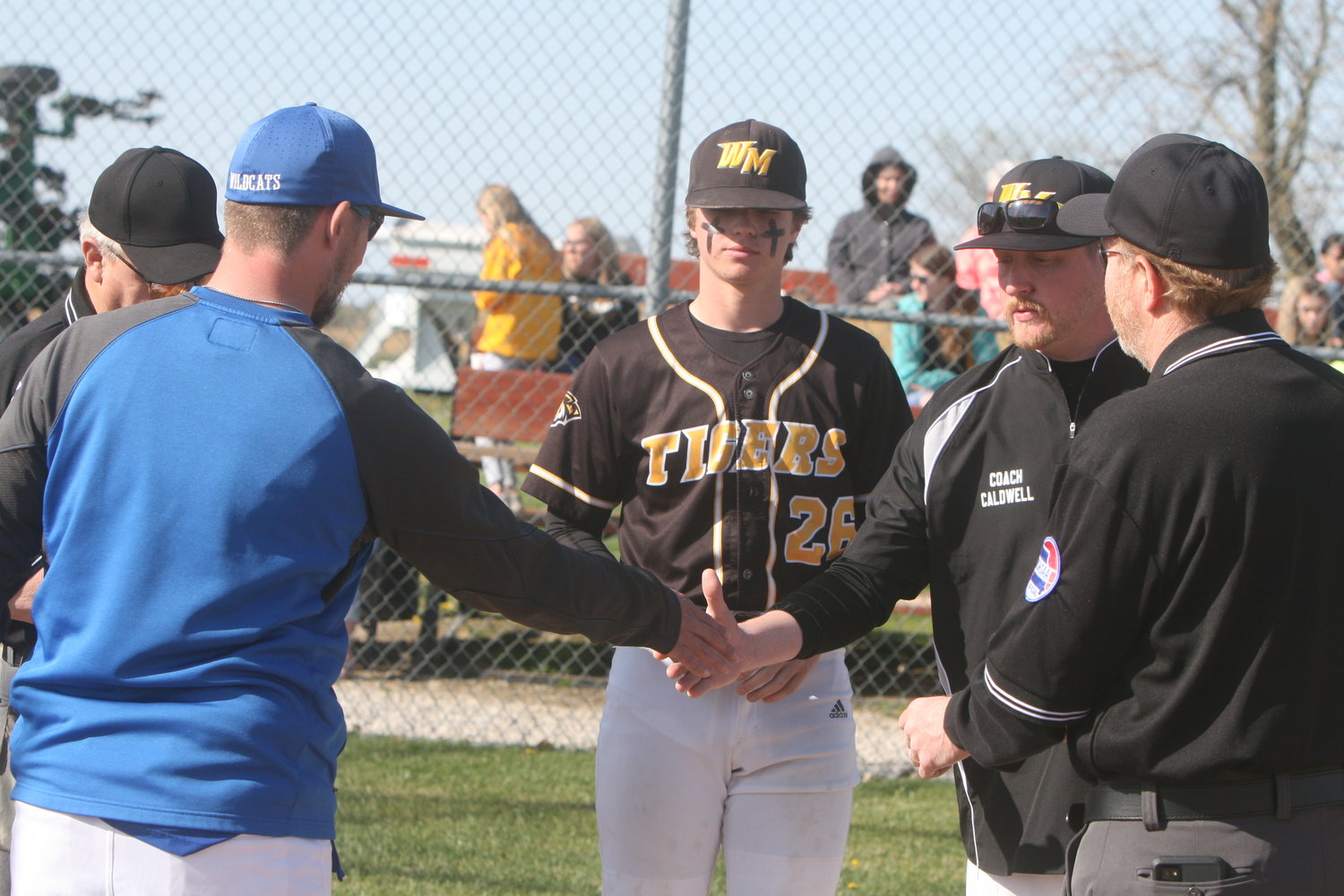 Montgomery County coach Vince Wolk shakes hands with Wellsville-Middletown coach Justin Caldwell before the Wildcats-Tigers game on April 26. W-M starts its district play on May 12, while MCHS begins its district action on May 16.
Theo Tate photo
Posted Thursday, May 12, 2022 9:11 am
By Theo Tate

A year ago, the Wellsville-Middletown baseball team knocked off the Glasgow Yellowjackets 10-0 in a Class 1 sectional game in Columbia.

At 4 p.m. on May 12, the Tigers will face the Yellowjackets again, this time in a Class 1, District 12 quarterfinal game at Glasgow High School.

Also, Montgomery County will begin its postseason play at 6 p.m. on May 16, when it takes on the South Callaway Bulldogs in a Class 3, District 7 semifinal game at South Callaway. The Wildcats are seeded second in the five-team district tournament, which is hosted by the Bulldogs.

W-M will look to win its second straight district title. Last year, the Tigers won the Class 1, District 12 championship by winning three games in the tournament as the No. 4 seed.
After beating Community R-6 in the district finals, W-M advanced to play Glasgow in a sectional game which was originally scheduled to be played at Glasgow. But heavy rain hit the Howard County town about 30 minutes before game time, forcing the sectional contest to be moved to Battle High School in Columbia.

The win over Glasgow advanced the Tigers to the quarterfinals, where they lost to Leeton 9-8 in eight innings.
W-M, which won 11 games last year, has just two wins this season. The Tigers beat Clopton and Silex, both at home.

“We played a really tough schedule,” W-M junior Lucas Moore said. “We’ll just keep practicing, working on the fundamentals and mechanics, getting comfortable in the batter's box and being able to read a fly ball. Whatever it is, we just have to get more comfortable out on the field.”

A win over Glasgow in the 2022 district quarterfinals will advance W-M to the semifinals against top-seeded Cairo at 5 p.m. on May 16 in a semifinal game. The championship game is scheduled for 5 p.m. on May 17.

MCHS will take on South Callaway for the second time this season. The Wildcats knocked off the Mokane school 4-0 on April 2 on the road.

In that contest, senior pitcher Evan Abercrombie struck out nine and gave up two hits and two walks to pick up the complete-game shutout victory. MCHS scored all of its runs in the fifth inning.

The Wildcats are looking to win their first district title since 2019. Last year, they lost to Elsberry in the District 7 finals.
A win over South Callaway will advance MCHS to the district finals for the second year in a row. The championship game is scheduled for 5 p.m. on May 18.

MCHS took a 7-6 record into its road against Mark Twain on May 9. Sophomore infielder Jace Ellis said he’s pleased with the way his team has been playing despite having several games being postponed due to rain.

“We have a great team. Every dude we bring in, they can hit and pitch,” Ellis said. “We have all kinds of guys who can hit. Once somebody gets it going, everybody else is going to follow us.”