A year ago, Earl Niswonger celebrated his birthday with mostly relatives. 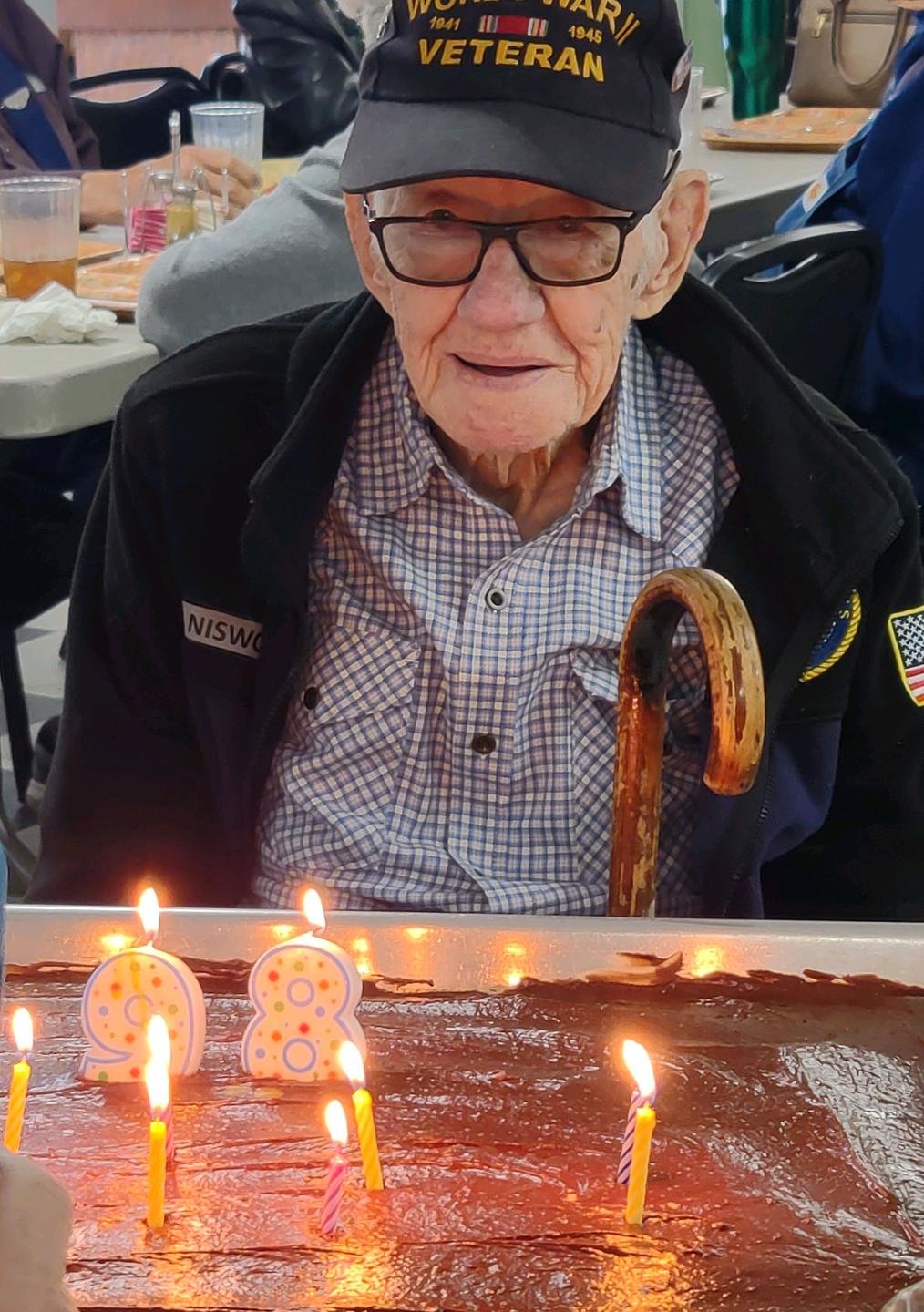 Wellsville resident Earl Niswonger attempts to blow out the candles on his birthday cake during his 98th birthday celebration on April 19 at the Montgomery County Senior Center.
Theo Tate photo
Posted Monday, May 9, 2022 8:09 am
By Theo Tate

A year ago, Earl Niswonger celebrated his birthday with mostly relatives.

“There were 40 people and it was chaos,” said Joan Barney, Niswonger’s daughter.

So when Niswonger found out that he was going to celebrate his 98th birthday on April 19 at the Montgomery County Senior Center with a much smaller crowd, he was pretty thrilled.

“I thought he may enjoy being with his friends at the Senior Center because he hasn’t been there for a while,” Barney said.

It turned out to be a memorable birthday for Niswonger as more than 25 people attended the celebration. Also, a birthday cake was made for him.

“They sang happy birthday to him and everybody clapped,” Barney said. “He started not feeling good, so we left. We didn’t think he would make it to 98 and he did.”

Niswonger served in the U.S. Navy during World War II (1941-45). He joined the Navy when he was 17 years old.
“When he was in the Navy, he said for one year, he didn’t touch his foot on solid ground,” Barney said. “He was on the ship. He said the only places he went were his bed, the gun and the kitchen where he cooked. That was it. There were the only three places he went for a solid year in 1944. He said everytime he would step his two feet off his bunk, he didn’t know whether he was going to put his two feet back up on the bunk that next night because the Japanese were bombing their ship all of the time.”

Barney said during the war, her father had a good sense of humor.

“When he was at war, he saw a big horsefly flying around the window and he caught it,” Barney said. “He took a pair of scissors and curled up a piece of paper. Somehow, the horsefly was attached to the piece of paper. He was a die setter at this company he worked at. It was the size of two football fields. He let the fly go and the fly flew the entire length of that machine that he was working on. Everybody looked up and was wondering what was that piece of paper flying the whole length of that machine. The boss walked up to my father and said, ‘Do you know anything about that?’ My father laughed and said, ‘What? Only you would do something like that.’”

Niswonger later got married and had six children, including Barney and her twin sister, Jean, who were the oldest. He lived in Massachusetts until 1957, when he moved his family to Jonesburg. Niswonger later moved to Wellsville.

Niswonger was born in Doniphan – which is located in the southern part of Missouri and is 15 miles from the Arkansas border – in 1924. He was one of 10 children.

“He grew up on a farm. The family was totally self-sufficient,” said Barney, who lives outside Baltimore, Md. “That’s amazing, feeding 10 children on a farm and being self-sufficient. The father would sell cream to buy the stuff the family needed, like shoes and school supplies for the kids.”