For a half of a century, beating on rocks has been a specialty for Wellsville resident Curtis Toucheshawks.

“I just learned the proper way of doing it on YouTube about five years ago,” … 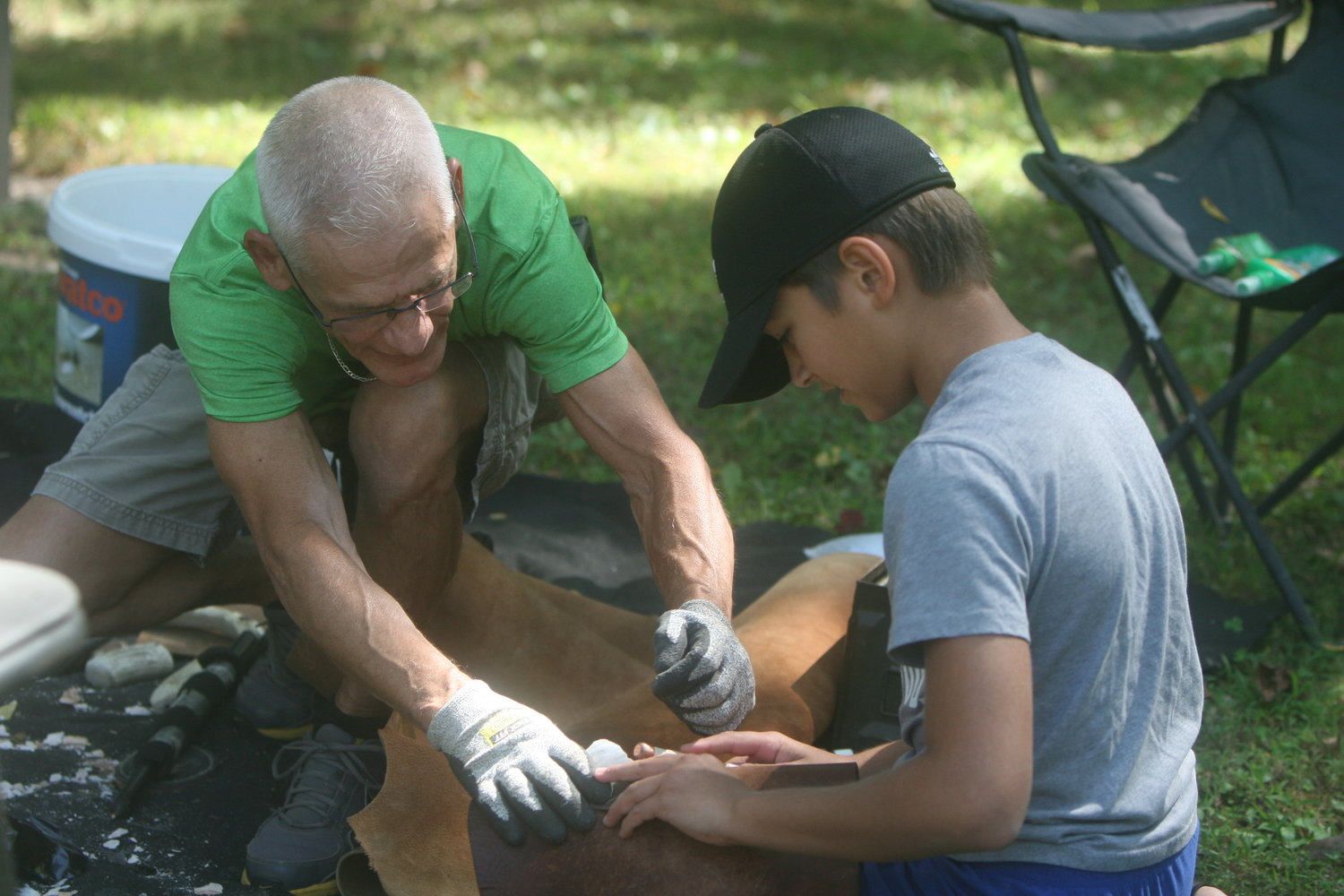 Curtis Toucheshawks of Wellsville helps his grandson, Drey Jones of O’Fallon, work on a project during the Archaeology Day event at Graham Cave State Park in Danville on Sept. 17.
Theo Tate photo
Posted Thursday, September 29, 2022 9:30 am
By Theo Tate

For a half of a century, beating on rocks has been a specialty for Wellsville resident Curtis Toucheshawks.

“I just learned the proper way of doing it on YouTube about five years ago,” Toucheshawks said. “My grandmother was beating on rocks and got me interested in it.”

“I love it,” Toucheshawks said. “You get to meet a lot of people. You get to explain to them the process of how our ancestors lived.”

Archaeology Day started at Graham Cave about 10 years ago. The five-hour event was to honor Missouri’s most significant early archaeological cave. Graham Cave became the first archaeological site in the United States to be designated a National Historical Landmark. It was named after Robert Graham, who bought some bottomland along the Loutre River from Daniel Boone’s son, Daniel Morgan Boone, in 1816 and purchased the property that housed the cave nearly 30 years later.

Visitors from Montgomery County as well as mid-Missouri cities such as Fulton, Jefferson City and Columbia attended the event.

Toucheshawks, who works as a superintendent for a construction business, said beating on rocks is not a difficult task.

“There’s a certain way that you have to do it or you’ll never get it right. You break a lot of rock, and you’ll get frustrated and lose your patience with it,” Toucheshawks said. “There are certain techniques that you learn. Sometimes you learn on your own and sometimes you learn it on YouTube. Sometimes when people don’t learn, they quit. Try not to quit.”

Also, Alexa Groeber, a junior at Montgomery County High School and a Graham Cave employee, taught visitors how to cut a deer bone in half.

“It’s been pretty busy,” Groeber said. “I’m liking it. I didn’t know what I was going to do when I got here. Then, they told me I was doing this. So I read up on it and I was like, ‘OK, this is actually kind of cool.’ I’ve been working and working, so it’s been fun.”

Groeber started working at Graham Cave over the summer. She found out about the job from her FFA advisers, Amanda Sullivan and Mary Leykamp. Groeber has a lot of duties such as being a tour guide, doing interpretive programs and working on maintenance projects around the park.

“I thought, ‘That actually would be kind of cool.’ It’s not that far away from my house,” Groeber said. “I was like, ‘I might try it.’ So I applied for it and I got it. I was excited. It’s been fun.”

The atlatl section was very popular at Archaeological Day as numerous people got to throw a spear into a target. The atlatl is a tool that was designed by early American Indians for hunting prior to the invention of the bow.

“These have been around the U.S. for 18,000 years,” said Jerry Nevins, who was the coordinator. “The oldest one they have found to date was in France and it was in a cave. It was made from a caribou antler.”

Nevins is from the Missouri Atlatl Association. He said other states such as New York, Pennsylvania, California, New Mexico and Washington have atlatl organizations.

“It’s not as big as a lot of the other sports, but it has a dedicated following,” Nevins said.

The Archaeology Day event also had a fire-making demonstration from park specialist Anthony Ozario and an appearance from the Montgomery County Historical Society displaying prehistoric and historical artifacts as well as books on the history of the county.

Graham Cave will have an informational meeting from 1 p.m.-2 p.m. on Oct. 30 at the lower picnic area shelter.