Kelly Borman came up with a massive project this year.

As part of Missouri’s 200th anniversary, the chairperson of the Kingdom of Callaway Historical Society wanted residents to visit … 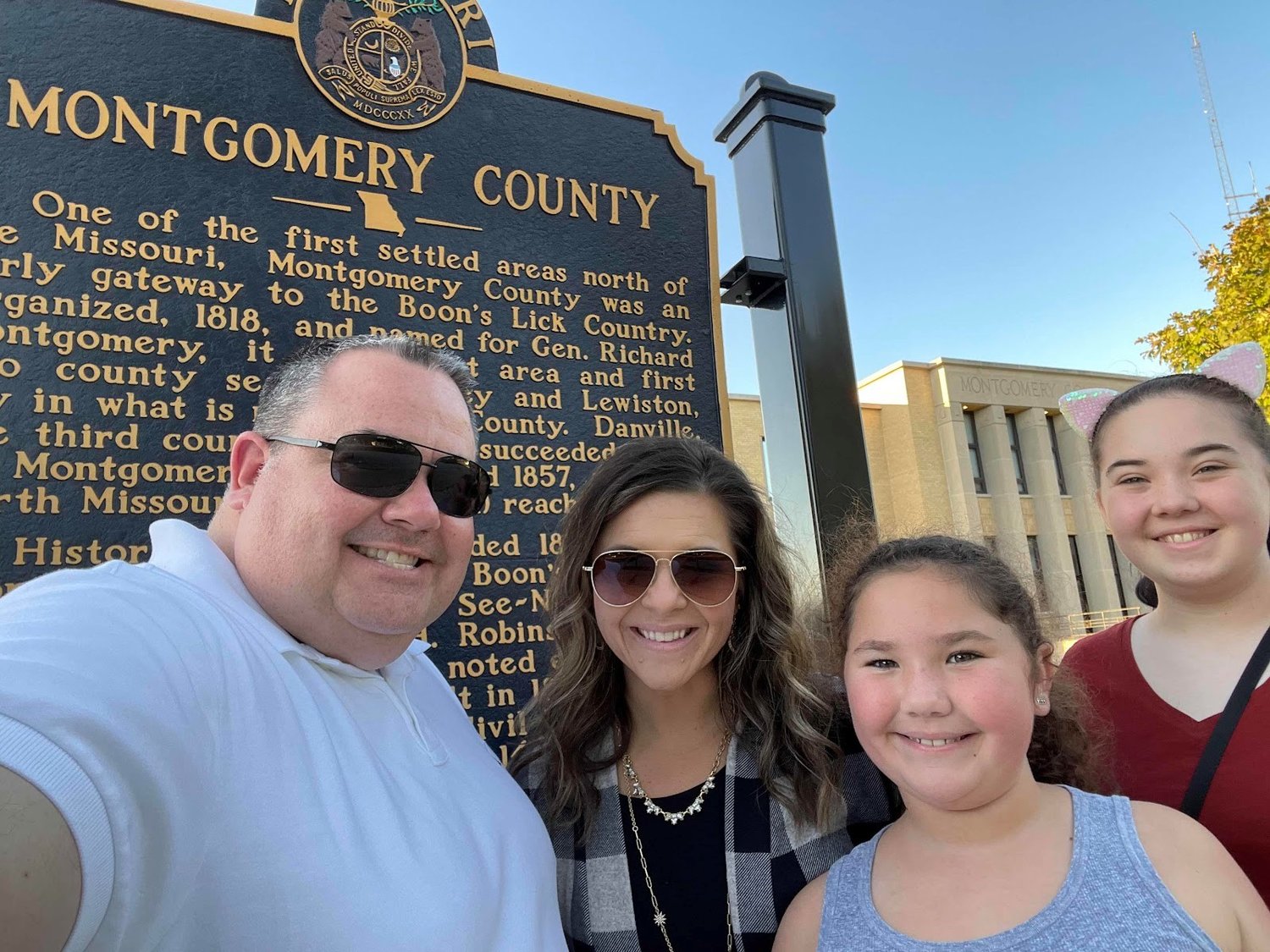 The Hux family of Derek, Lindsey, Lilli and Lexi poses next to the Montgomery County Courthouse, one of the sites of the Kingdom of Callaway Historical Society Scavenger Hunt, which started on Oct. 1 and ends on Nov. 30. The family lives in Fulton.
Submitted photo
Posted Thursday, November 4, 2021 6:11 pm
By Theo Tate

Kelly Borman came up with a massive project this year.

As part of Missouri’s 200th anniversary, the chairperson of the Kingdom of Callaway Historical Society wanted residents to visit mid-Missouri counties and learn the history of all of them. So she came up with a scavenger hunt that will allow contestants to visit 21 sites in six counties, including three in Montgomery County.

The Kingdom of Callaway Historical Society Scavenger Hunt started on Oct. 1 and is scheduled to end on Nov. 30. Borman said after a month, the contest has been getting a strong turnout.

“I heard from at least 12 teams. Many more have picked up their packet from the Historical Society and have reached out,” Borman said. “About 12 teams have been to at least three stops, so it’s exciting.”

Graham Cave State Park became a state park in 1964, three years after becoming the first archaeological site in the United States to be designated a National Historic Landmark. Founded in 1853, Danville Female Academy was considered one of the first female colleges west of the Mississippi River and has a Civil War marker. The current Montgomery County Courthouse was built in 1955.

“There are many other things in the county that people can take an interest in,” Borman said. “Because it’s a scavenger hunt and Missouri is 200 years old, I was trying to go with some of the early history places, especially Graham Cave, the Civil War marker in Danville and the courthouse with those beautiful history panels.”

The scavenger hunt also includes sites from Audrain, Boone, Cole, Callaway and Osage counties. Among them are the State Historical Society in Columbia, the Lewis & Clark Monument in Jefferson City, the Arthur Simmons Stable in Mexico, Bicentennial Tri-County Marker in Holts Summit and Townley House Museum in Chamois.

All participants have to take a selfie for each stop they make. They can either submit the photos to Facebook, e-mail the photos to KCHS or bring the photos in person to the KCHS Museum in Fulton. Those who visit all 21 sites will be entered in a prize drawing. First prize is $200, second prize is $100 and third prize is a deluxe gift basket. The drawing is scheduled for Dec. 7.

“My goal is to get like 100 teams to do this,” Borman said. “We also have the endorsement of the Missouri Bicentennial committee, so we’re on their website. The State Historical Society, which is in Columbia, has arranged with us that teams that have completed at least half of the stops are going to get a free Christmas ornament from their gift shop. So they’re trying to get involved as well.”

Last year, Borman organized the Callaway 200 Scavenger Hunt, which had participants visit 20 places in Callaway County as part of the county’s 200th anniversary. That gave the former elementary school teacher the idea to have a scavenger hunt that covers all of mid-Missouri.

“Traveling is really great and is really fun,” Borman said. “There’s a lot to see. But my whole thought was you have a whole lot to see in mid-Missouri.”

For more information, contact the Kingdom of Callaway Historical Society at callawaymohistory.org.