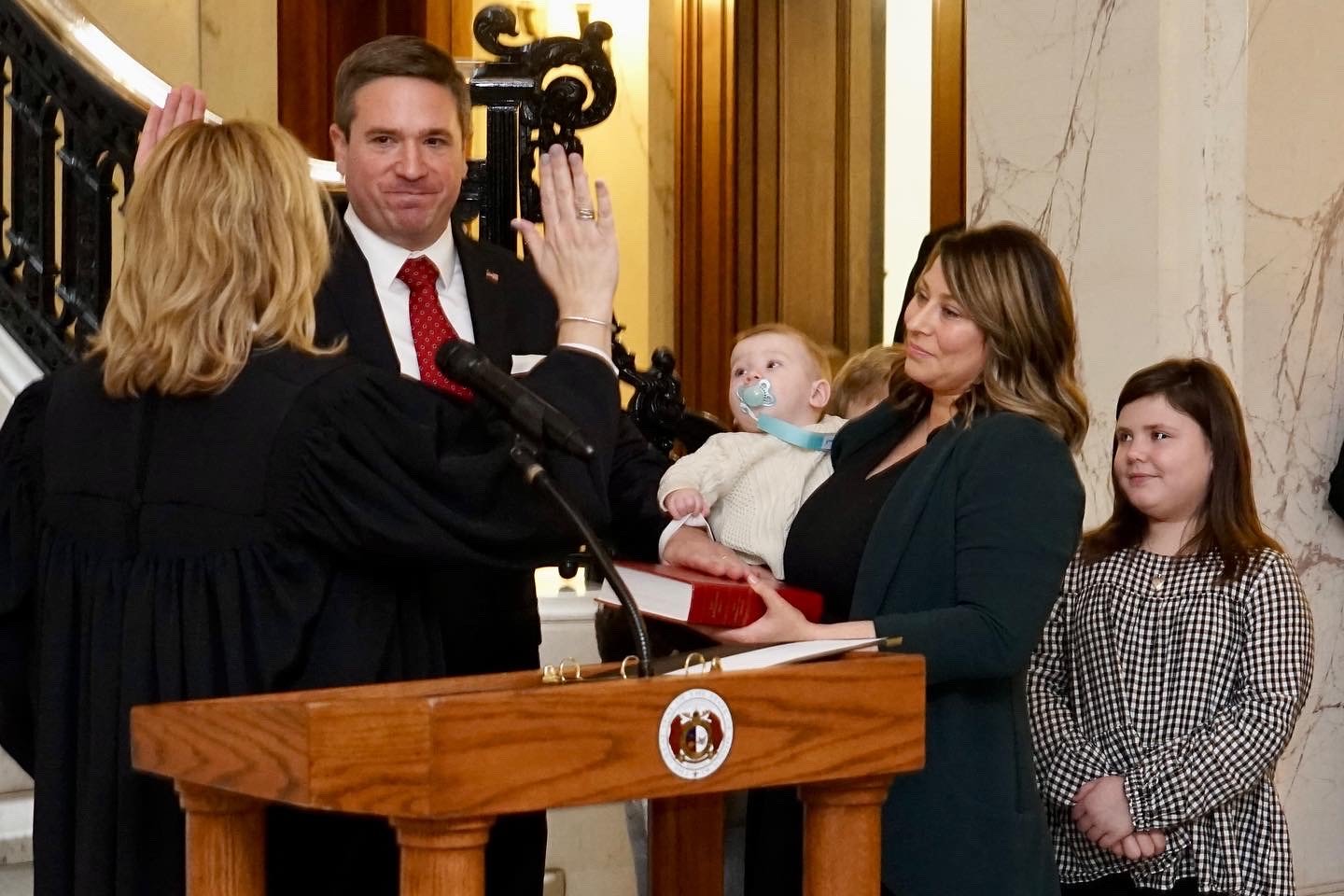 Rhineland resident Andrew Bailey is sworn in as Missouri Attorney General on Jan. 3 in Jefferson City, while his wife and children look on.
Photo courtesy of the Governor’s Office
Posted Monday, January 16, 2023 10:40 am
By Rudi Keller, Missouri Independent

Rhineland resident Andrew Bailey officially took over Missouri Attorney General duties as he was sworn in before a crowd of about 150 at the Missouri Supreme Court building in Jefferson City.

Bailey said he’s grateful to Gov. Mike Parson for appointing him. He worked in Parson’s office for about three years and was general counsel to the governor for the past year.

Bailey said that his office would be transparent. He also said he would enforce all the laws where he has power to act, including a new state law making it a crime for homeless people to sleep on public property.

“I am dedicated to the principle that I am here to enforce the laws as written,” Bailey said.

Bailey, 41, was appointed by Parson just before Thanksgiving to replace Eric Schmitt, who on Tuesday was sworn in as the newest U.S. Senator from the state.

As he introduced Bailey on Jan. 3, Parson noted that after Scott Fitzpatrick is sworn in as auditor and Vivek Malek takes the oath as treasurer, he will have appointed five statewide officeholders since becoming governor in 2018.

“I’ve had the opportunity to vet the best Missourians when they are looking for positions to move up to,” Parson said.

Bailey went through the same process as everyone else who sought the job, Parson said.

“He had some very strong competition out there that we had to weigh out and figure out who we were going to select,” he said.

Prior to going to work for Parson, Bailey was general counsel for the Missouri Department of Corrections. He began working in state government in 2014, when he was hired as an assistant attorney general.

He is an army veteran and referred to his combat experience in Iraq as a model for running the attorney general’s office.

“I will lead this office with the same steady hand and an unyielding pursuit of victory,” Bailey said.

Bailey was sworn in by Kelly Broniec, a Montgomery City resident who is a judge of the Eastern District Missouri Court of Appeals.