Five years ago, Will Stuck decided to make a change.

After working in the library business for many years, the resident from St. Joseph wanted to spend more time educating and entertaining … 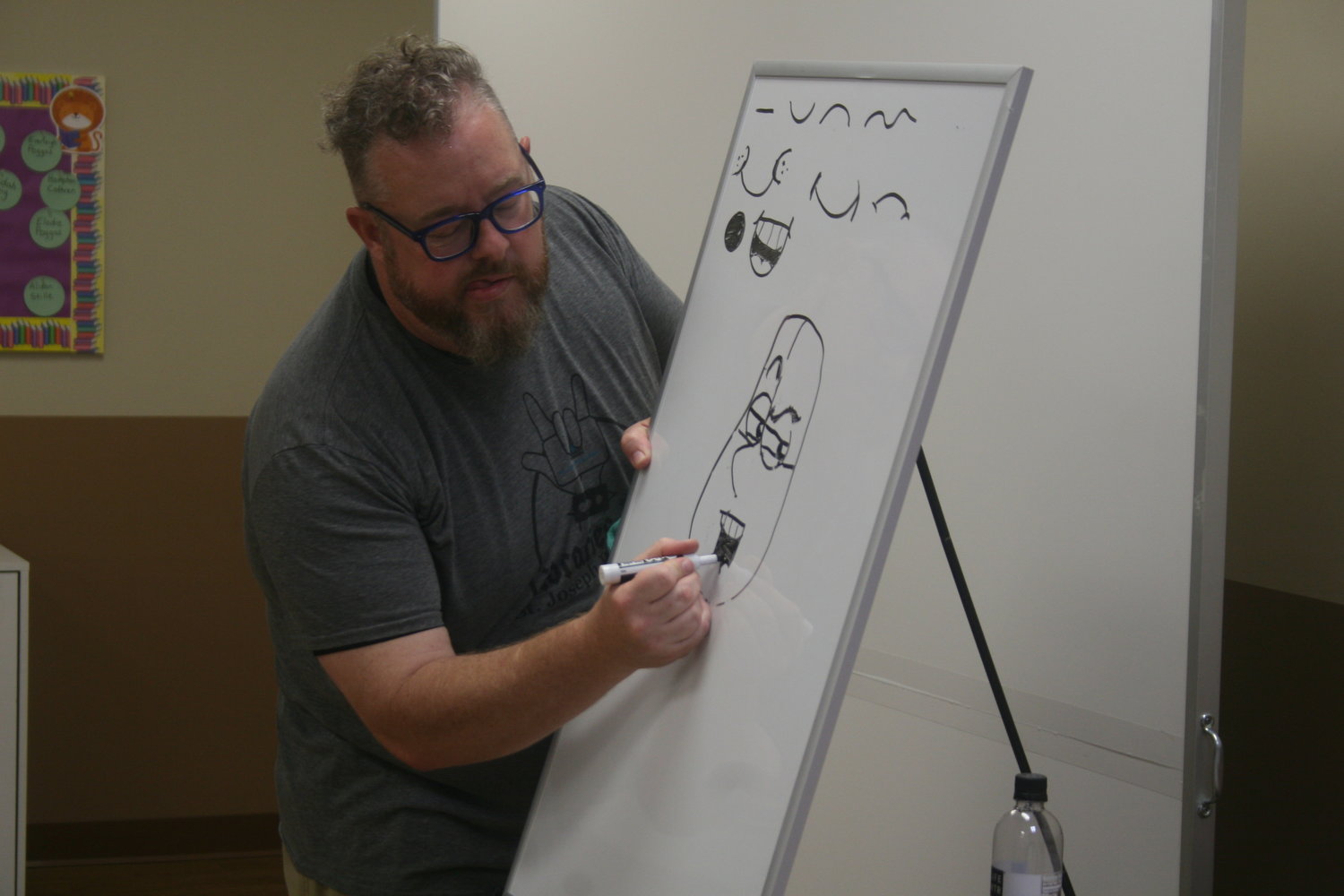 Will Stuck, a comedic storyteller from St. Joseph, gives a cartooning lesson during his visit at the Montgomery City Public Library on June 13. Stuck visited the Wellsville Public Library the following day. His visits were part of the summer reading programs both Montgomery City and Wellsville libraries are having.
Theo Tate photo
Posted Thursday, June 23, 2022 9:22 am
By Theo Tate

Five years ago, Will Stuck decided to make a change.

After working in the library business for many years, the resident from St. Joseph wanted to spend more time educating and entertaining children at libraries. So Stuck became a full-time storyteller, entertainer and educator, going to libraries all over the Midwest.

“I had a heart attack 10 years ago,” Stuck said. “When you have one of those, you start doing the whole, ‘Am I doing what I supposed to be doing with my life?’ That’s what made me realize what was my motivator – making a difference in making people smile, laugh and think. Once I realized that, people made suggestions and said, ‘Why aren’t you doing this?’ That actually started to take root. Instead of it being a compliment, it was me now going, ‘Maybe I could do that.’ Finally, one day, I was like, ‘I think I can.’”

Stuck visited Montgomery County on June 13-14 as part of his tour that will have stops in the Kansas City area, North Dakota and Michigan’s Upper Peninsula. He did his comedic performance of “20,000 Laughs Under The Sea” at both libraries. His visits were part of the summer reading programs both Montgomery City and Wellsville libraries are currently having.

Both libraries will continue having their summer reading programs until late July. Oceans of Possibilities is the theme for both programs.

“Summer reading is important because that’s how I still keep in touch and stay in contact with the library world,” Stuck said. “I get to visit all of these places and see this stuff.”

Stuck came to Montgomery City on June 13 and Wellsville the following day. He will be doing 52 shows across six states this summer. He said he gets paid by the libraries for his performances.

Stuck named his performance after “The 20,000 Leagues Under The Sea,” which is a novel by Jules Verne and a motion picture that was made in 1954.

“Every year, I try to think of something funny to go with my show,” Stuck said. “Then, I picked that name and I was like, ‘I don’t want to use it if there’s something else out there.’ It wasn’t until I told some people, ‘Yeah, it’s going to be called this.’ I found out there was once a play in the Chicago area called that. I was like, ‘Whatever.’ I was trying to play off ‘The 20,000 Leagues Under The Sea.’ ”

Luanne Andrews, one of the MCPL summer reading program coordinators, said children enjoyed Stuck’s performance on the morning of June 13.

“It’s awesome,” Andrews said. “It was great to hear the laughter back here. That’s what we want. We want these kids to get excited about coming in and doing things.”

Stuck gave a one-hour cartooning lesson while he was in Montgomery City.

Stuck has been a big fan of libraries since he was a little boy. He made many visits to the St. Joseph’s Public Library with his father, Steven.

Stuck started working at the St. Joseph library while attending Missouri Western. He held many jobs such as page, shelver and delivery guy. Then, he conducted preschool story time sessions and programs for elementary students and adults. He also met his wife, Crystal, there.

In 2017, Stuck stopped working at the library to concentrate on his new role of full-time storyteller, entertainer and educator. He said his goal is to continue doing engaging programs that will help children read more.

“If they get them in the door, the chances and likelihood of them picking up a book are going to prevent the summer slide and keep these kids being not only readers, but library supporters for life,” Stuck said.