For two months, the Montgomery County High School seniors were in boot camp as part of … 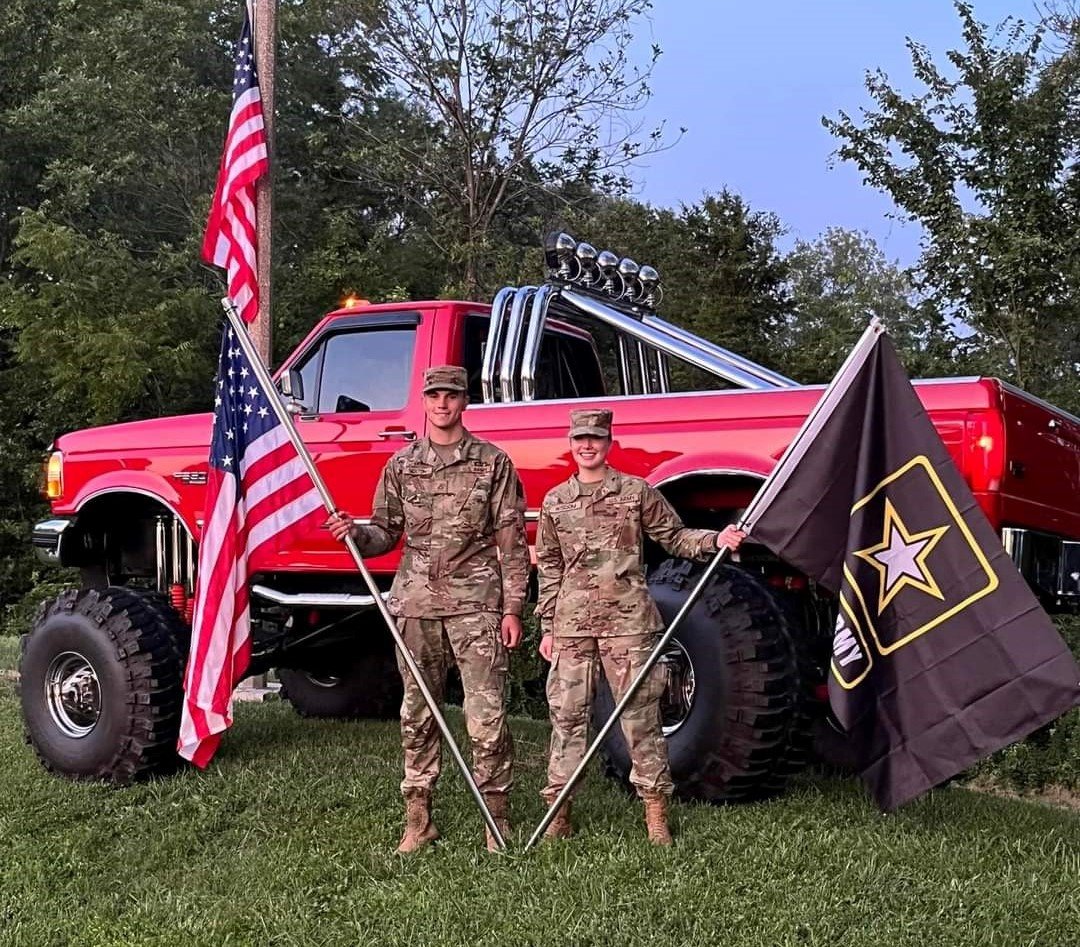 Montgomery County seniors Gunner Sexton and Maddie Wisdom pose with their Army uniforms during a welcome home party on Aug. 16 in New Florence. They graduated from an Army National Guard boot camp at Fort Jackson, S.C., on Aug. 11.
Submitted photo 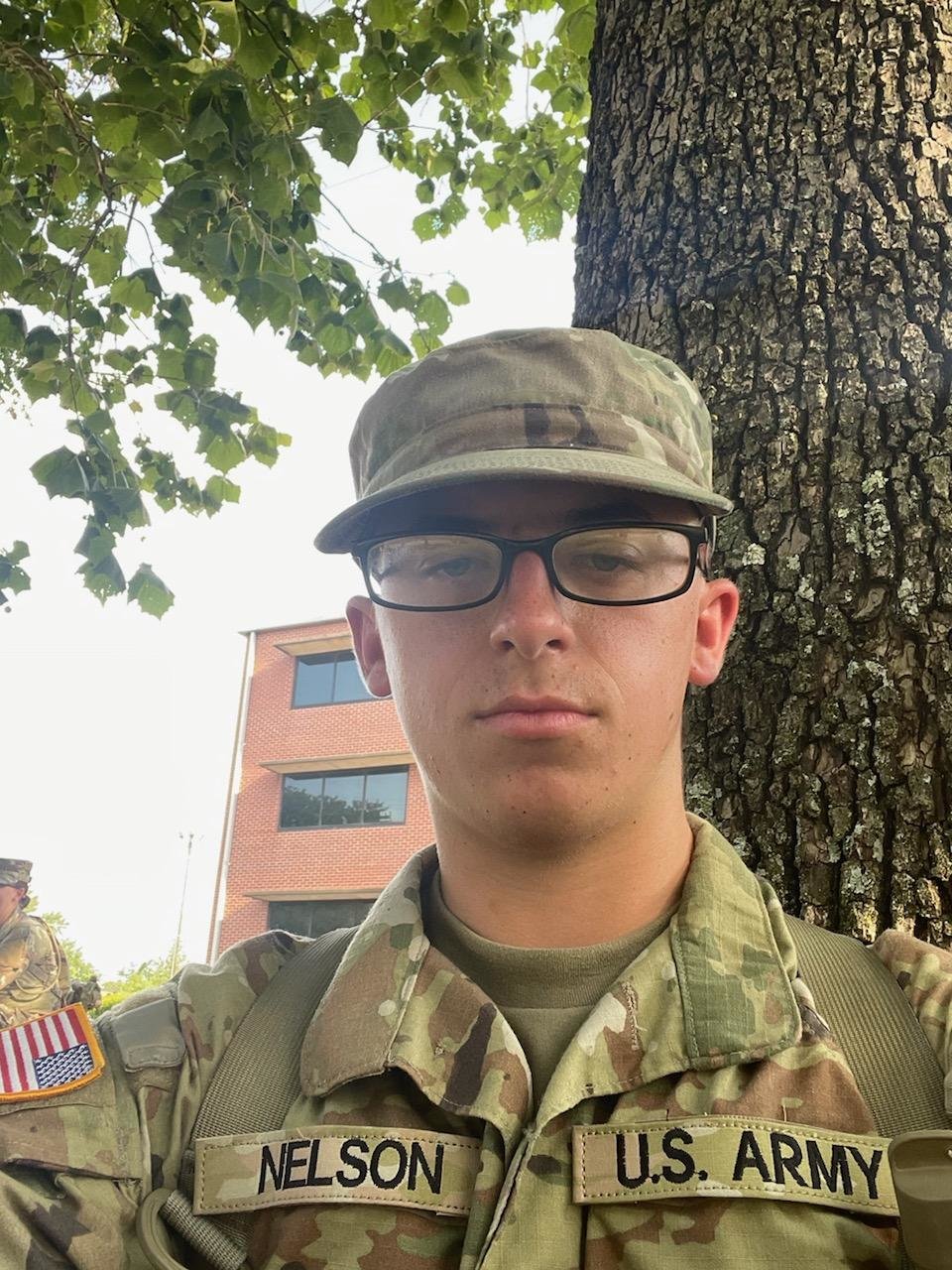 For two months, the Montgomery County High School seniors were in boot camp as part of the Army National Guard. Sexton and Wisdom were stationed in Fort Jackson, S.C., located outside Columbia, while Nelson was at Fort Leonard Wood, just 120 miles south of Montgomery County.

“I think it’s really nice that they want to stand up for their country,” said Monica Wisdom, Maddie’s mother. “They’re all young. It was a huge decision for them. It’s something to be proud of.”

Now, the trio is back home in Montgomery County. Sexton and Wisdom graduated from boot camp on Aug. 11, while Nelson graduated on Aug. 18.

Wisdom was the first to come home on Aug. 11. The following day, she had her first practice with the MCHS softball team. Wisdom said her teammates were happy that she came back from South Carolina.

“I drove up and they were all screaming,” Wisdom said. “They all gave me a hug. They were like, ‘We’re so glad to have you back.’ It was a good welcome.”

Wisdom left for boot camp on June 1. The two-month stay in South Carolina was the longest she has been away from home.

Monica said saying goodbye to her daughter was pretty hard.

“We had a going away party for her on Memorial Day,” Monica said. “Then, she was able to spend another day with family. Then, she left. She was emotional. It was sad.”

Wisdom followed in the footsteps of her older brother, Donnie, who graduated from MCHS in 2021. Donnie also was a member of the Army National Guard.

“I went through it with Donnie,” Monica said. “Donnie’s (boot camp) was 25 weeks, so I knew what I was getting into. Not that any mom likes it, though.”

After graduating from boot camp, Sexton stayed in South Carolina, spending a few days in Myrtle Beach with family members before returning home on Aug. 16.

A welcome home party was thrown for Sexton and Wisdom on Aug. 16 at the New Florence Community Building with over 100 family members and friends in attendance. Sexton’s sister, Josie, came home for the first time since 2020, when she joined the Navy. She has been stationed in Japan for two years.

Sexton said going to boot camp was an amazing experience.

“From the moment you go to basic, it’s a whole different world,” Sexton said. “You have to basically live by yourself. You’ll be in a room with people you may not like. You have to grow up and put up with them for the entire time you’re in basic.”

Sexton plays football and baseball and competes in track at MCHS. He said playing all of those sports helped him prepare for his trip to boot camp.

“They get you in shape,” Sexton said. “Maddie and I worked out a lot at the gym, so we were pretty much in shape right before we left. That helped both of us a lot.”

Sexton’s mother, Stephanie, said her son performed well at boot camp since he went there on June 1. He was selected as a platoon guide and competed in a contest for the most physically fit soldier.

“I missed him greatly, but this was what Gunner has prepared for all of his life,” Stephanie said. “Everything he has done with schooling, sports and friendships has led him to his military career. He is a great leader and a good motivator. He’s in his happy place.”

Nelson came home in the afternoon of Aug. 18 with a small gathering with the family and banners over the house that read, “Welcome home.”

The 17-year-old said he learned four things from his time at boot camp.

“I learned not to give up, keep pushing, teamwork and the value of life,” Nelson said.

Nelson thought about joining the Army National Guard for a couple of years.

“I was hesitant at first when he told me he wanted to do this like every mom would be, which is kind of scary,” said Beth Nelson, Matthew’s mother. “He’s always been my head strong kind of guy. He always knows what he wants. During his 17th birthday this past January, he goes, ‘Mom, I’m going to sign up.’ It took me a little convincing, but I finally came around. I’m very proud of him. I was still scared, but I’m very proud.”