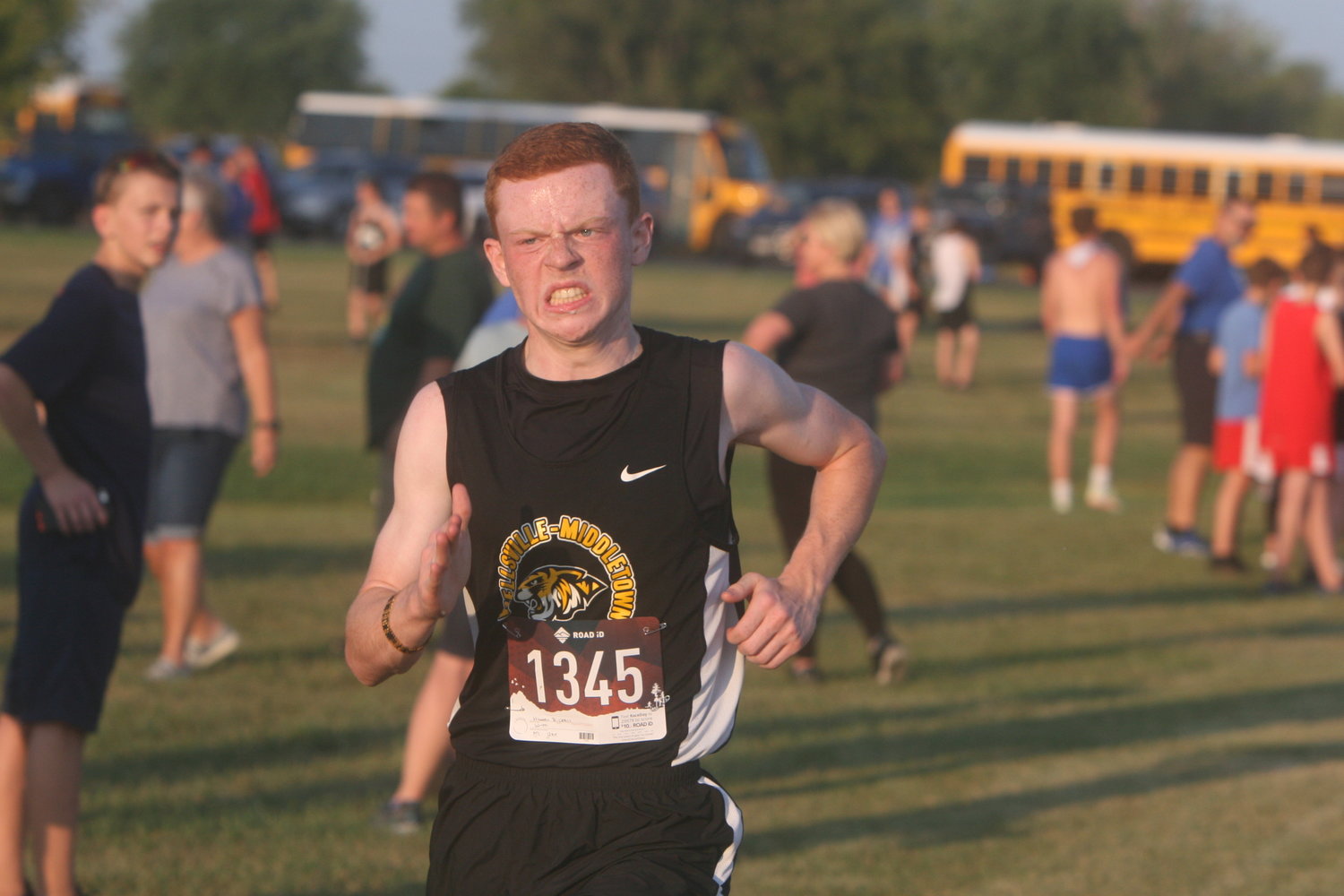 Wellsville-Middletown sophomore Hunter Bickell sprints to the finish in the boys race of the Van-Far Invitational on Sept. 6 at Van-Far High School. Bickell was one of five W-M runners who earned medals.
Theo Tate photo
Posted Monday, September 19, 2022 12:57 pm
By Theo Tate

That’s when they wrapped up their freshman seasons with the Wellsville-Middletown boys cross country team by helping the squad accomplish an historic feat. They lifted the Tigers to a third-place finish in the Class 1 state cross country meet in Columbia, the first top-four finish in program history.

“I didn’t believe it at first,” Slovensky said. “I was really hoping that we didn’t get last. It was quite wonderful that we got third.”

Now sophomores this fall, Bickell and Slovensky will look to help the Tigers get back to state even though they lost five runners to graduation.

“I’m just hoping that we get past districts,” Slovensky said.

Bickell and Slovensky started their 2022 seasons on a high note on Sept. 6, earning medals in the boys race at the season-opening Van-Far Invitational at Van-Far High. Bickell placed ninth with a time of 20 minutes, 20 seconds and Slovensky came in 14th with a 22:26.

Bickell picked up a medal at Van-Far for the second year in a row. Last year, he finished 13th.

“It’s pretty fun,” Bickell said. “That means I’m not starting off half as bad as I thought I would from last year. It feels great.”

Slovensky said he was thrilled to get a top-15 finish at Van-Far to start his sophomore season.

Last year, Bickell and Jonah Slovensky were part of a W-M squad that included seniors Layne Norris, Isaac Seabaugh, Keaton Mayes and Jason Hollensteiner. Both were coming off outstanding careers in the junior high level.

Besides the Van-Far meet, Bickell also earned medals at the Linn and Hermann meets. His best time was an 18:51 at the state meet.

“I started off the year in the fifth position,” Bickell said. “Then, I just jumped to second in two races. It was unbelievable.”

Slovensky was the Tigers’ No. 6 runner for most of the season. He also recorded a season-best time at the state meet, running a 20:14.

“It was kind of cool that I was one of the top seven,” Slovensky said. “I never thought I would be that high.”

The Tigers had five runners place in the top 100 at the state meet, including Bickell. He said his teammates were ecstatic after they found out they got third.

This year, Bickell and Slovensky lead a team that has senior Kaleb Peak, junior AJ Sherwood and sophomore Gage Marshall, who placed 18th at the Van-Far meet.

“I think we’ve got a decent squad,” Bickell said. “We lost key numbers, but I’m hoping that we’ll be able to make it up.”