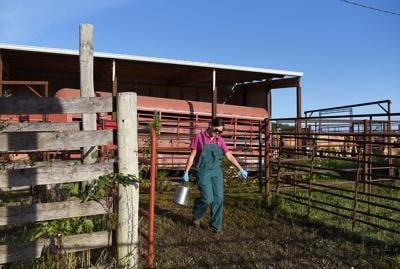 Sonja Perry carries feed while tending to animals at a Pike County Farm. Perry, who is the co-owner of the Bowling Green Vet Clinic, is one student who benefited from the Large Animal Veterinary Student Loan program, which can allow veterinary students at MU to have up to $20,000 a year in loan payments forgiven for a maximum of four years.
Margo Wagner/Columbia Missourian photo
Posted Wednesday, August 17, 2022 9:36 am
By Evan Lasseter

She already had the itch to become a veterinarian after raising some goats on her family’s land in Bowling Green. At first, she wanted horses, like every 5-year-old girl in the world, she said. Perry ended up with goats, but it wasn’t like she settled. She began breeding them, and when they had health problems she would always wonder why.

“I hated calling someone else to come solve the health problems of my goats,” she said.

Perry wanted to solve them herself, so by the age of 10 she was committed to a career as a veterinarian. She spent another week at Bowling Green Vet Clinic when she was 16. When another chance at job shadowing came up during her senior year, she chose the Bowling Green Vet Clinic again.
Perry was pulled away from Bowling Green for a time but only to pursue those veterinarian dreams. During veterinary school at MU, she came across the Dr. Merrill Townley Large Animal Veterinary Student Loan Program, which provides loans to vet students who plan to practice on large animals. The state forgives the loans for students who go on to practice large animal medicine.

After Perry graduated from veterinary school in 2019, she spent a year doing veterinary work in Franklin County before returning to the Bowling Green Vet Clinic, where she worked for two years as an associate. Given the amount of money she saved through the loan program, she was able to make a down payment and become a co-owner.

“I really do feel like on a daily basis, I am living my childhood dream.”

The Missouri General Assembly created the Large Animal Veterinary Student Loan Program in 2007. Veterinary students at MU can be forgiven up to $20,000 a year in the loan payments for a maximum of four years. The total amount awarded through the program by the Missouri Department of Agriculture so far is around $1.5 million.
Tackling student debt targets one of the largest barriers to veterinary school. The estimated cost to attend the MU College of Veterinary Medicine is around $51,000 per year. However, around half of its students are from out-of-state, Cohn said. Those students pay around $93,000 per year.

“They need some kind of foothold, some kind of opportunity,” Steve Strubberg, Missouri’s state veterinarian, said. “So it’s a good way to get them started, I believe.”

The program is one way for Missouri to tackle shortages of large animal veterinarians, a problem that is felt nationwide and affects mostly rural areas.

Forty-six states have at least one shortage area, which can include small or large animal veterinarians, according to a shortage map from the U.S. Department of Agriculture.

There was an increase in demand for all veterinary care during the height of the COVID-19 pandemic, but there is evidence to suggest sustained demand for food and farm animal veterinary services in some rural areas, Michael San Filippo, media relations manager for the American Veterinary Medical Association, said in an email.

Although data on the shortages is hard to track, a pre-pandemic survey by the Missouri Veterinary Medical Association Rural-Veterinary Task Force found around 80% of its respondents perceived a rural vet shortage. The USDA map lists rural vet shortages in multiple regions of the state.
Leah Cohn, interim associate dean for student and academic affairs at MU’s veterinary college, receives requests from practices almost daily looking for new veterinarians to join them. The issue is particularly problematic in rural areas and small towns, she said.

In Missouri, the shortages could be worse. Forty-six students have been recipients of the loan program, and nearly all are practicing in a rural area, Christi Miller, communications director for the Missouri Department of Agriculture, said.
“You’re not going to make as much money (in rural practice),” Cohn said, “and helping to pay down some of the debt may be the difference in being able to go to a rural community and being forced to go to a more lucrative practice in an urban area.”

Katelyn Bischof came to MU’s veterinary school after earning an undergraduate degree in animal science from the University of Illinois. She grew up in a rural area in the southern part of that state, and while Bischof was at MU, she knew she wanted to practice with large animals.

Bischof was a program recipient in her fourth year of veterinary school after being uncertain about working in Missouri. Since graduating in 2020, she has worked at the Hermann Veterinary Clinic in Hermann, where at least 50% of her work is with large farm animals, mostly cattle, she said.

Bischof’s experience is one example of the trade-offs graduates who want to practice on large animals face. Bischof’s one year of loan forgiveness covered more than 15% of her debt, which allowed her to take the Hermann job.

“It has continued my interest in large animal medicine because it’s helped me out quite a bit financially,” Bischof said.

Still, the reasons for veterinary shortages are vast, and loan forgiveness only addresses one part of the problem. Many in the field point to a rise in corporate practices whose higher wages and benefits offer enticing opportunities, Cohn said.

Rural vet work can also be a large professional commitment, and needs can surface on a whim. Daniel Tappmeyer, co-chair of the Rural-Veterinary Task Force, once received a call for a calving from a client about an hour away from his practice in Hermann.

Just last Friday, Perry left her Bowling Green clinic at 6:30 a.m. to visit a farm in Silex. She drove around 25 minutes to give Brad and Steff Mosby’s heifers a Calfhood vaccine.

The Mosbys and Perry’s vet technician, Rachel Hatfield, herded the cattle through the squeeze chute, which holds the cows in place and relaxes them. Then Perry gave the vaccine and tattooed each cow’s ear with the Calfhood sign for documentation.

The process worked like a well-run assembly line, with Perry vaccinating and tagging 40 heifers in around 50 minutes. On her way back to Bowling Green, she stopped in Paynesville to check on a show heifer with a limp. She removed a rock from its hoof and prescribed painkillers. When she finally made it back to the office, a bull was waiting for a semen check.

All that happened before 11 a.m.

Although the work can be tough, Tappmeyer said perceptions that quality of life for rural veterinarians is lower than others, is false.

Missouri’s loan program is providing needed respite for some students in light of these challenges. In the task force survey, 78% of respondents said the Missouri Veterinary Medical Association should support it.