For more than 40 years, Gene Whyte was an avid outdoorsman.

The Montgomery City resident trapped wild animals, hunted for animals such as muskrats, beavers, raccoons, otters and coyotes and did a … 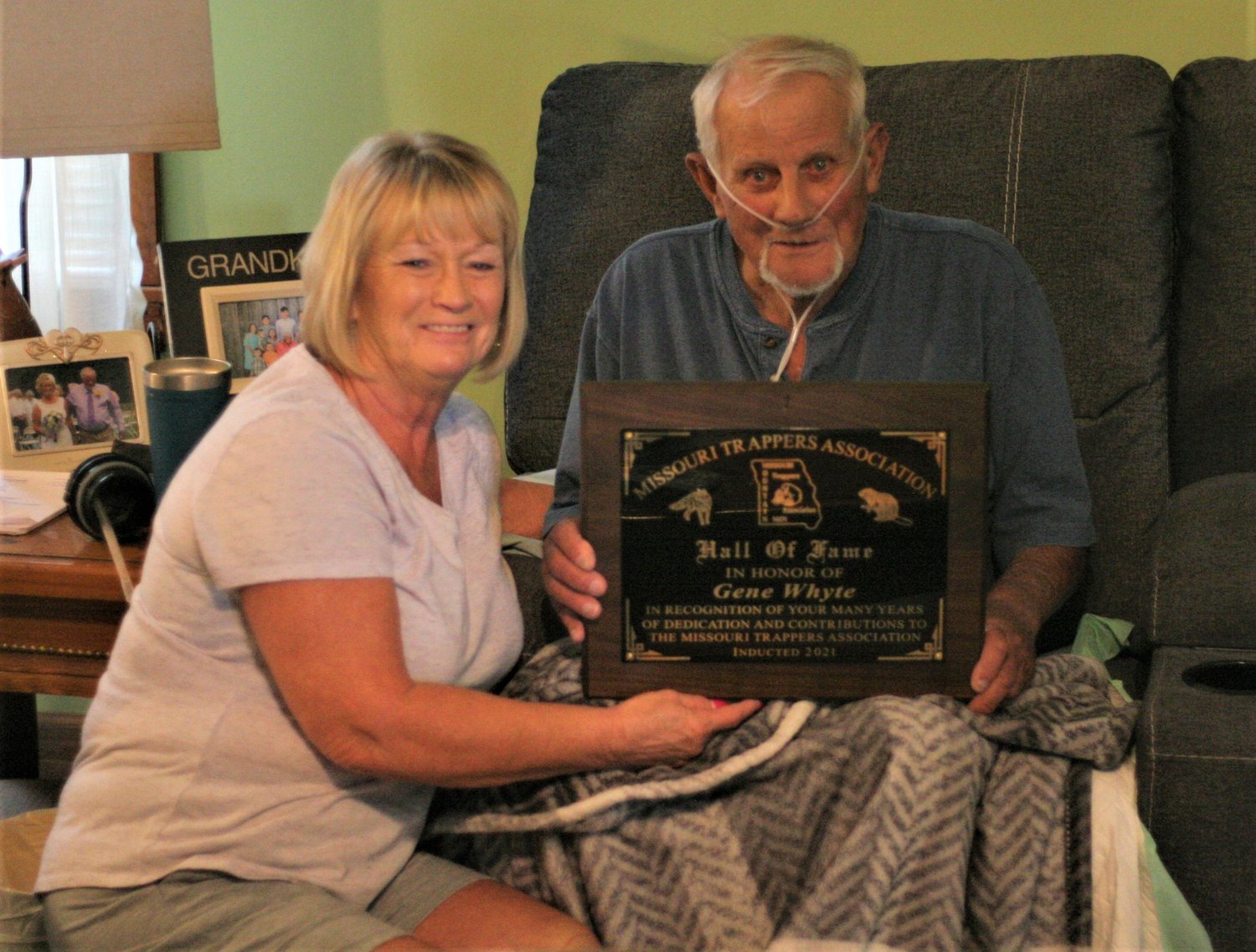 Montgomery City resident Gene Whyte poses with his wife, Karen, and the plaque he earned from the Missouri Trappers Association Hall of Fame. Whyte has been trapping, fishing and hunting for over 40 years.
Theo Tate photo
Posted Thursday, October 14, 2021 10:46 am
By Theo Tate

For more than 40 years, Gene Whyte was an avid outdoorsman.

The Montgomery City resident trapped wild animals, hunted for animals such as muskrats, beavers, raccoons, otters and coyotes and did a lot of fishing.

“He was into all of that kind of stuff,” said Karen Whyte, Gene’s wife.

That certainly caught the attention of the Missouri Trappers Association Hall of Fame committee. Whyte became one of two inductees in this year’s hall of fame ceremony, which was held during the Fall Rendezvous on Sept. 17 at the Montgomery County Fairgrounds.

Whyte joined Jefferson City resident Ralph Duren in this year’s class and received a plaque. There are now 43 members who have been inducted into the MTA Hall of Fame.

“It means more than anything in the world to me,” the 68-year-old Whyte said. “Trapping was my phase in my life. That's all I wanted to do. I just love to be in the outdoors and trap. I ate it up and I just love it. Some people like to hunt. I made a lot of friends.”

Whyte worked as a carpenter during the summer months. He did his trapping during the winter to earn extra money.

Whyte said he was never a fan of sports such as baseball and football.

“I was too busy trapping,” he said. “You have to decide what you want to do. This day and age, most of them want to go play ball. It’s sports, sports, sports.”

Whyte has lived in Montgomery County for most of his life. He went to high school in Elsberry, where his father worked.

Whyte started trapping when he was in high school in the late 1960s and early 1970s. He retired from trapping last year after he was diagnosed with pulmonary fibrosis and chronic obstructive pulmonary disease (COPD).

Whyte enjoys spending time with Karen, whom he married in 2012. They dated when they were in high school.

Karen said she would go trapping with her husband sometimes.

“I helped him before back in the day when raccoons were so high,” Karen said. “I would go out with him on the first night or two because he had a goal of 200 raccoons per season. So he went and set a lot of traps at that time. So we would go out at midnight and go set them. I can drive, while he can just get out and get in. I went a few times and he let me shoot a couple of them.”

Whyte said he enjoyed going to the Fall Rendezvous, where fur trappers get together to pass on knowledge on ethical trapping and get an opportunity to purchase supplies for trapping.

“I wanted to participate in this,” Whyte said. “We have so many people who don’t participate, but somebody’s gotta keep this organization (MTA) going.”

“You got to want to do it,” he said. “Some people have the heart to kill so many animals. There’s a purpose in it. I kill them to kill them. We kill them because they get overpopulated and disease sets in and starts wiping them out.”