After traveling all over the country for the last eight years, Shawn and Ashley Miller decided to find a new home for their Burnouts Pizza business.

So they moved it to Montgomery City in late … 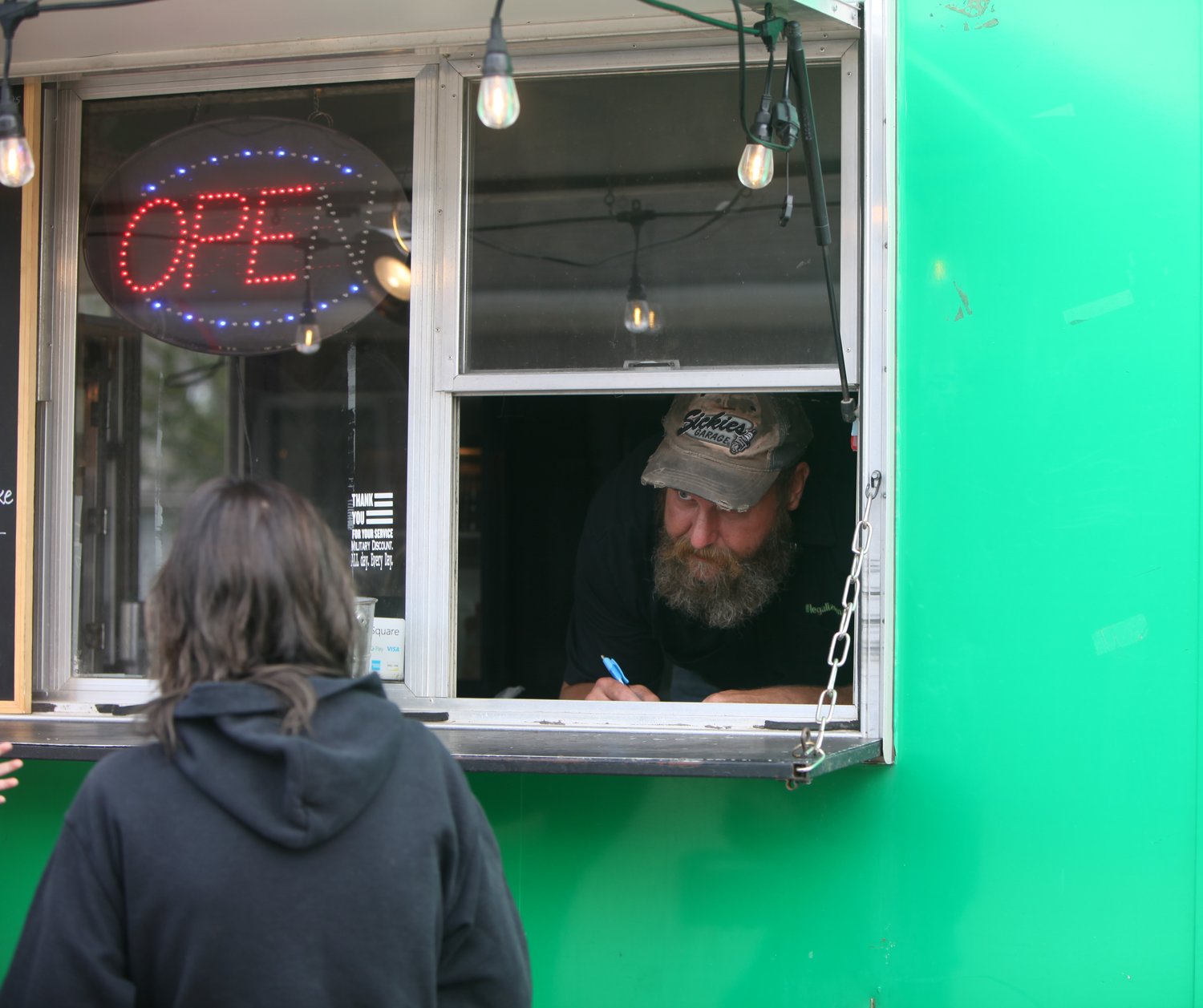 Burnouts Pizza co-owner Shawn Miller takes an order from a customer on Oct. 13. Burnouts Pizza is a new business that is located at 223 S. Sturgeon in Montgomery City. It has been open since late September, serving St. Louis-style pizza with plenty of toppings, toasted sandwiches and garlic bread.
Theo Tate photo
Posted Friday, December 3, 2021 9:23 am
By Theo Tate

After traveling all over the country for the last eight years, Shawn and Ashley Miller decided to find a new home for their Burnouts Pizza business.

So they moved it to Montgomery City in late September. Since then, many residents have enjoyed coming to the restaurant to taste its St. Louis-style pizza, toasted sandwiches and garlic bread.

“We like food,” Ashley said. “That’s why we like setting up and serving the locals. They trust us. So you have to earn their trust.”

The Millers operate their business out of a food truck, which is located behind a house on 223 S. Sturgeon.

“A friend of mine had the property,” Shawn said. “We just got back from South Dakota on the first of September. We went over to talk to them and said, ‘Hey, do you want to park your trailer here?’ I was like, ‘OK.’ So that’s how we ended up in Montgomery City. We’re working on remodeling the house, redoing the property and cleaning it up. It has been neglected over the years. We have a lot of plans for it. It all takes time.”

Originally from Warrenton, the Millers now live in Columbia. Ashley and Shawn grew up in Jonesburg and Pendleton, respectively.

Ashley said she’s happy that she and her husband moved their business to Montgomery County.

The Millers named their business after one of Shawn’s friends who passed away at a young age.

“He was at our wedding,” Shawn said. “He wasted more tires than anybody I know. He put a new set of tires on. By three or four in the afternoon, they would be shot. They would be smoked on. After he died, we realized that we wanted to live our lives differently.”

The Millers brought a trailer in 2013. They operated their business in South Dakota and Texas before returning to Missouri.

“When we bought it, we thought we would stay local,” Ashley said. “We thought we would stick around Missouri. But we’re kind of wild, so we took off to Sturgis (South Dakota), then we took off to Daytona Bike Week. Once we started traveling, we kept traveling. We spent two years in South Dakota. It was too cold there. Then, we were in the gulf in Texas for eight months and it got too hot there. We ended up back in Missouri somehow.”

The business will continue its operations all through the winter. It is open from 4 p.m.-8 p.m. Thursday through Saturday. For more information, call 636-377-3923 or visit Burnouts Pizza’s Facebook page at www.facebook.com/burnoutspizzamidmo.