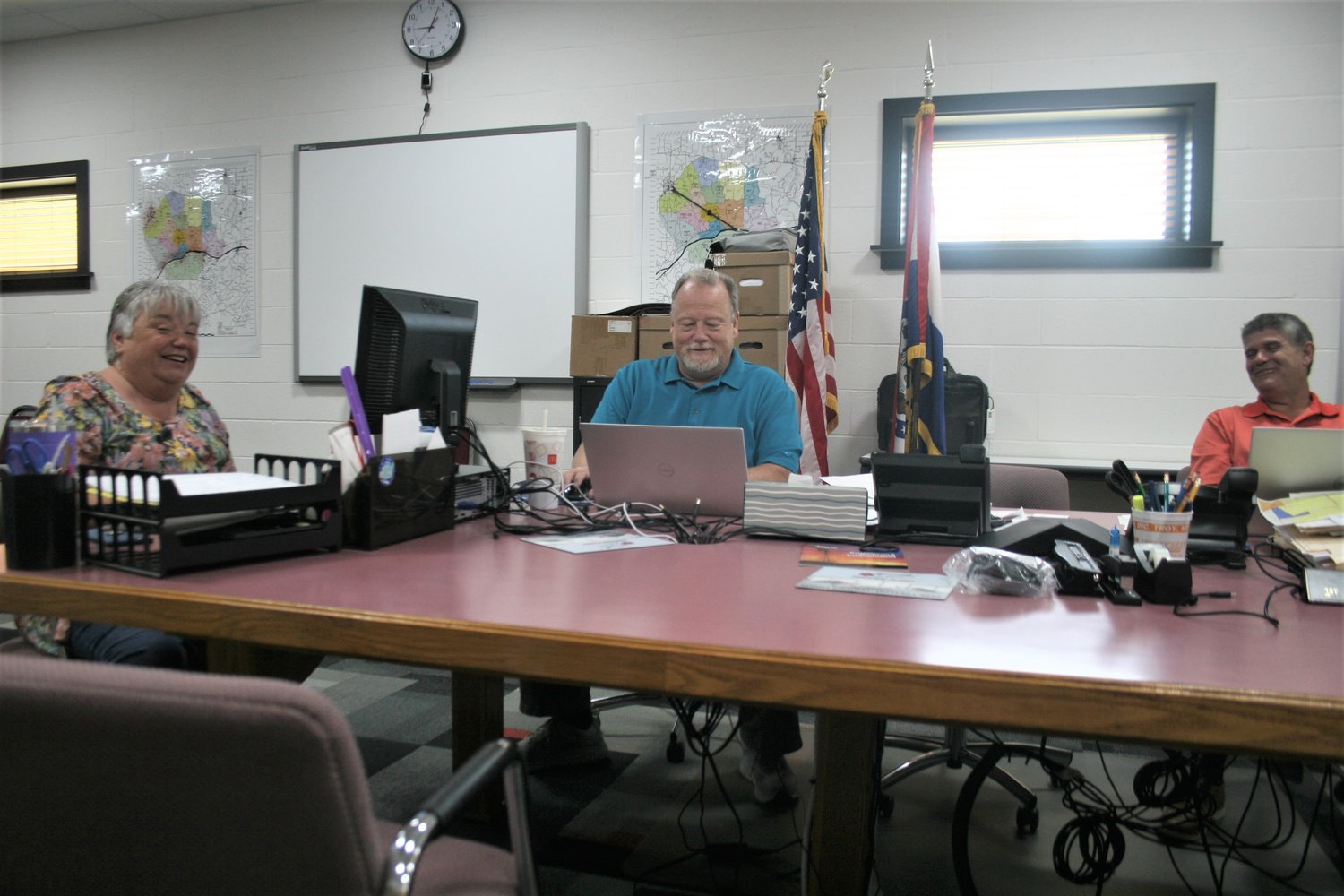 Montgomery County Clerk Kathy Hancock, 2nd District Commissioner Doug Lensing and 1st District Commissioner Dave Teeter have a conversation before the start of their meeting on Aug. 18 at the Montgomery County Communications Center building on Pickering Street in Montgomery City. This will be their temporary home while the county courthouse undergoes renovations.
Theo Tate photo
Posted Thursday, September 1, 2022 9:53 am
By Theo Tate

“It’s kind of a change of scenery,” Hancock said.

The county commissioners held their first meeting at MCCC on the morning of Aug. 18. Meetings will continue to be held at 9 a.m. every Monday and Thursday at MCCC.

“A lot of people have never been in this building from a public standpoint,” Teeter said. “So if people come to see us, they’ll at least be able to see the inside of the building and see what it’s all about. Obviously, there are a lot of boxes that aren’t normally here because we had to move our stuff down here.”

Teeter said the courthouse will be officially closed to the public at the end of August.

“They’re hoping to get the moving people in there on the 29th to move all of the furniture out so the asbestos people can get started during the first part of September to abate everything,” Teeter said. “After they get done, they’re going to do a little construction work to open up more areas for wiring and things to get into the court area and a few other places. They’ll start doing the flooring. Then, we’ll be able to move back in.”

Hancock will be working at MCCC until after the general election, which is in November.

The treasurer, prosecuting attorney and juvenile offices are also closed.

“One of the prosecutors is staying in the Sheriff’s office and the rest are working from home,” Teeter said. “The treasurer is working from home and will be coming in when she needs to for signing checks and things like that. All of the court services go to City Hall. (Associate Circuit Judge) Nathan (Carroz) will work from home mainly until he has to be in court.”

Teeter said there have been some positives in the move from the courthouse to MCCC.

“I heard two or three people say it helped them purge things that they needed to get rid of, things that were left sitting around forever,” Teeter said. “So they got rid of stuff that they needed to get rid of. They’re looking forward to not having links in the courtroom and having problems that we dealt with over the last few years. We’re looking forward to a better heating and cooling system. There are a variety of things that will be in a much better situation for people to have a better work environment.”

The $5.2 million renovation project at the courthouse will last until probably the end of the year. The project includes window and roof replacements and masonry repairs at the courthouse and jail, new lighting and ceilings and asbestos abatement. Work began in mid-May, when some trees near the courthouse were cut down in order for a ground source heating and cooling system.