For many years, Jackie Carter played a valuable role in the New Florence community. 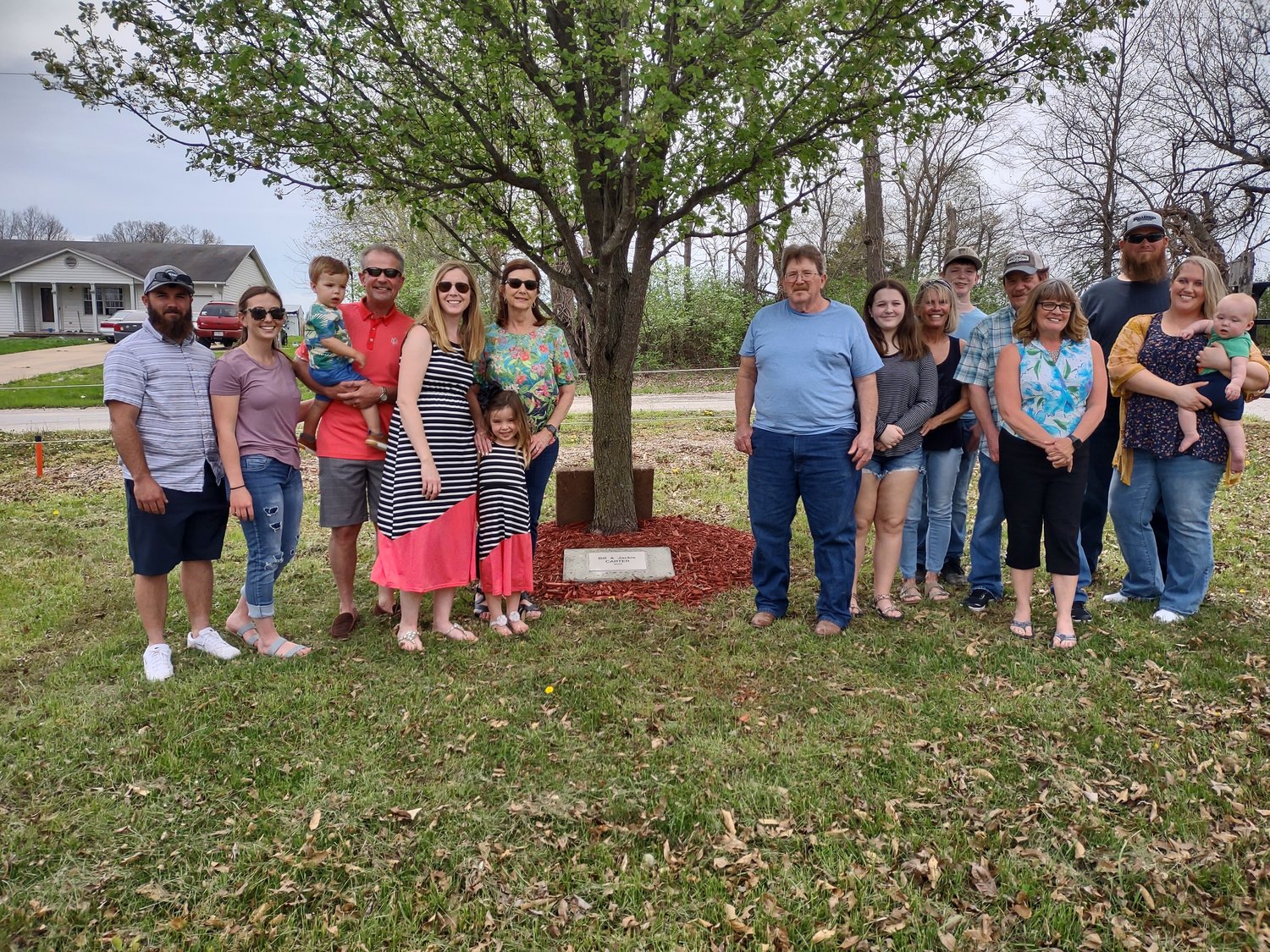 Family members of Jackie Carter pose next to a tree during a memorial tree planting ceremony at the Old Settlers Picnic Grounds on April 23. Carter, who died in 2019, was honored at the ceremony.
Theo Tate photo
Posted Monday, May 9, 2022 8:06 am
By Theo Tate

For many years, Jackie Carter played a valuable role in the New Florence community.

“She was a great example of what a small town community is all about,” said Dawn Carter, one of the Old Settlers board members. “She took time out every day to help others and sent birthday cards to everyone she knew.”

On the afternoon of April 23, the Old Settlers honored Carter during a memorial tree planting ceremony at the picnic grounds. A total of 30 people were in attendance to see a plaque with Carter’s and her husband Bill’s names planted next to a tree. Carter died in 2019 at age 88 and Bill passed away in 2010.

“I really appreciate the Old Settlers for doing it for the community,” said Gabby Oliver, Carter’s granddaughter. “It’s really nice to have a small town community that recognizes your family for all of the small stuff they did. Grandma Jackie didn’t do a whole lot, but she helped out in everything she could such as the Cakewalk and the Lady Lions Parade. She was a great woman. She really showed me how to be a woman, like teaching me how to do my makeup and stuff. I love Grandma Jackie.”

The memorial tree planting ceremony has been a tradition at the Old Settlers Picnic Grounds since it first started in 2000. The event honors the people who served in the New Florence area as well as the Old Settlers Association.

Dawn Carter said the ceremony was held for the first time in a couple of years.

“Now that we had a couple of people pass away, we kind of try to do it a year after,” she said. “We don’t want to do it right after they pass away because it would kind of bring back bad memories. So we kind of wait a year.”

Born in St. Louis, Jackie Carter lived in New Florence for most of her life. She married her husband at New Florence Methodist Church in 1951 at age 20. She had three children – Kevin, Eric and Becky – seven grandchildren and four great-grandchildren. A total of 16 family members attended the tree planting ceremony.

Oliver, who lives in Columbia, said she was very special to all of the grandchildren and great-grandchildren.

“She always made our Easter outfits,” Oliver said. “She would sew them from patterns she would buy from Wal-Mart. She would do that for most holidays until Aleshia Carter became the first one to get pregnant out of all of the grandkids. That’s when she finally quit making dresses for all of us.”

“She takes a handful of vitamins every day,” she said. “She took care of herself so well until the very end.”

“She ran the voting thing every year,” Dawn said. “She did that probably for 50 years. She said when they go and vote, there will be polls all day long every year.”

Dawn said Old Settlers will probably do a ceremony on Charlie Meador – who passed away on April 10 – next year. Meador, who lived in Wellsville, was a president of the association.