The Missouri Department of Transportation has made plans to replace the Missouri Highway 19 Bridge over Interstate 70 near New Florence.

Construction will begin this fall and will last for about a … 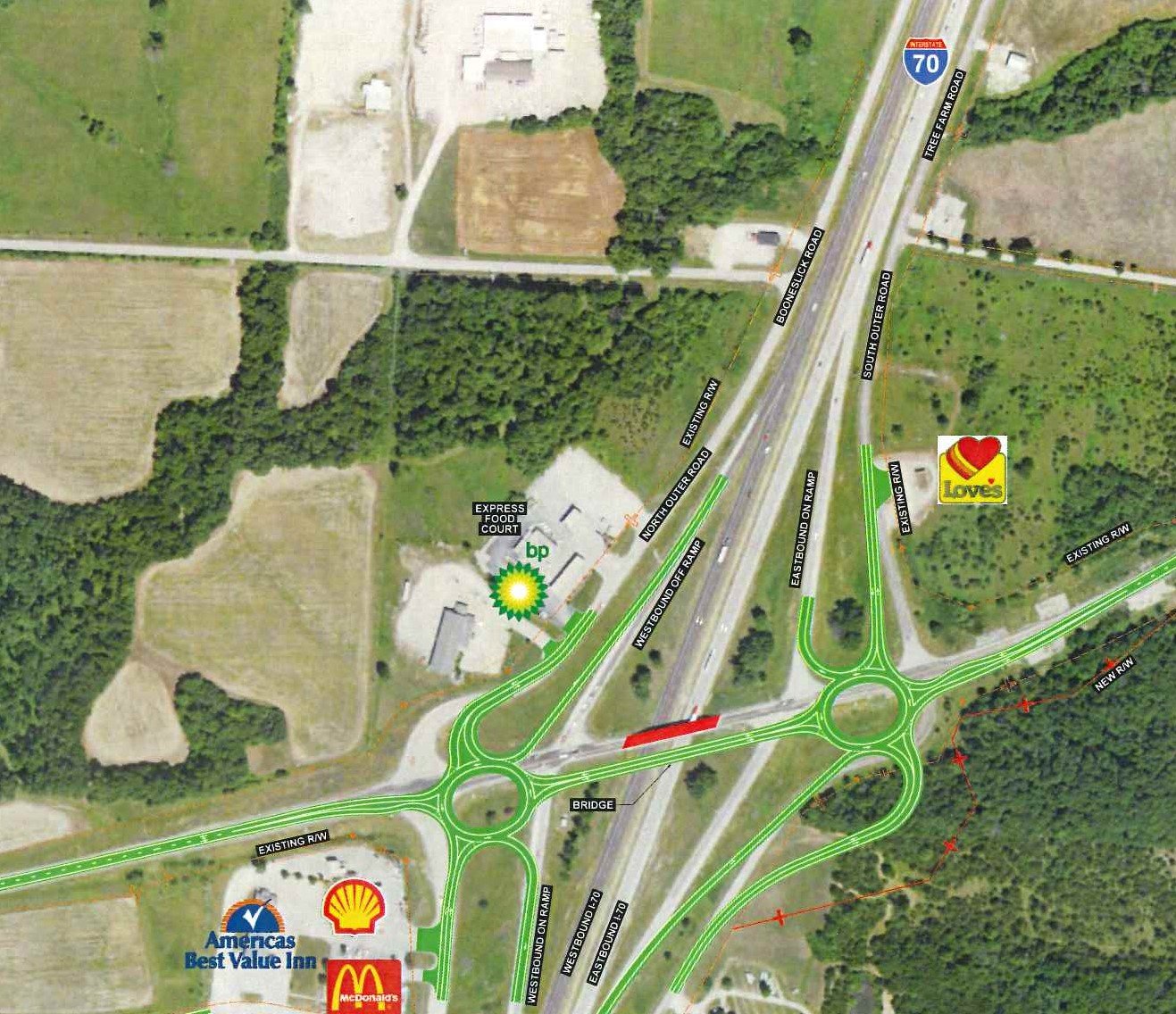 A diagram of the new Missouri Route 19 Bridge over Interstate 70 near New Florence. Construction will last for about a year and will cost around $10 million.
Posted Thursday, January 20, 2022 10:57 am
By Theo Tate

The Missouri Department of Transportation has made plans to replace the Missouri Highway 19 Bridge over Interstate 70 near New Florence.

Construction will begin this fall and will last for about a year. The new bridge will be located west of the existing bridge. There will also be two oval roundabouts built, one on each end of the interchange.

The project will cost about $10 million. During the construction, the existing traffic light located on the north end of the interchange will be eliminated.

“Interchanges aren’t cheap to the extent that we’re doing a lot of work to try to improve traffic flow and everything,” MoDOT Area Engineer Erik Maninga said. “It adds up pretty quick.”

The Missouri Route 19 Bridge project is divided into six stages. In the first stage, the new bridge will start construction this fall. There will also be an extension of Clark Drive, located north of the interchange.

“There won’t be any impact on traffic, so you’ll be able to go through Highway 19 and interchanges,” Maninga said.

Stage two will begin in the spring of 2023 as the roundabouts will be constructed. There will be a closure of North and South Outer Roads to the west of Highway 19.

Drivers who want to get access to the South Outer Road west of Highway 19 will need to detour to the Highway 161 interchange in Danville. The newly constructed Clark Drive will be open for anyone who wants to go to businesses such as McDonalds, the Shell gas station and America’s Best Value Inn.

Stage three construction will begin in the summer of 2023. There will be detours in the eastbound I-70 off-ramp and the westbound I-70 on-ramp.

Also, a portion of Highway 19 south of the interchange will be closed for at least a week.

In stage 4, drivers will get to travel on the new bridge, but the westbound I-70 off-ramp and the eastbound I-70 on-ramp will be closed.

Pavement near Love’s Truck Stop will be constructed during stage five, but the drivers will still be able to get in and out of the business.

In the final stage, the old bridge will be removed.

“When they do that, there will be a one-night closure where traffic on I-70 will have to be routed up the ramps to get through as they take that bridge down,” Maninga said.

The roundabouts in the project are 172 feet by 212 feet with an 18-foot truck apron, which will be larger than the Scott’s Corner roundabout on the intersection of Highways 19 and 54 near Laddonia and the Route MM roundabout near Warrenton.

Maninga said he talked to numerous people who enjoy driving through roundabouts.

“The biggest thing is older drivers are not used to them and haven’t seen that many of them,” Maninga said. “There are a lot of pluses. You don’t have traffic signals, so traffic flows a lot smoother. You’re not sitting at a stoplight, so you don’t have to maintain traffic signals. They get pretty expensive putting them up.”