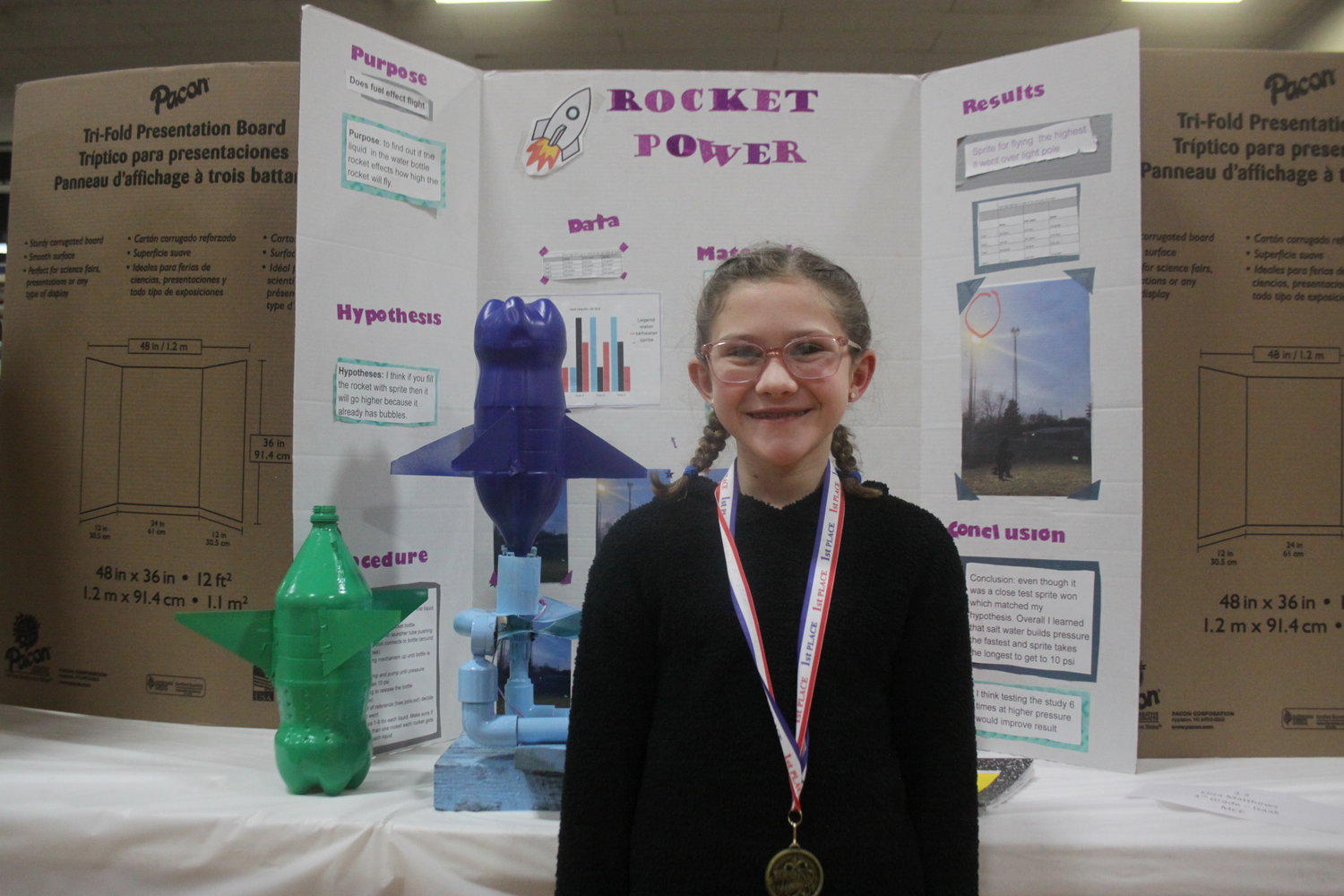 “She pushes us all out of bed so we can start running by sunrise,” said Susan Elder, Julia’s mother.

The fifth-grader from Montgomery City Elementary shared her passion of running in her science project, which helped her win first place at the Montgomery County R-II Science Fair on Jan. 12 at the MCE gymnasium.

Julia’s project was called “Another Run Bites The Dust,” which experiments what’s the best time to run – mornings or evenings. It took her two months to work on the project, which included a data analysis chart on how long it takes for each person to run in the mornings and evenings.

Julia was very happy to get another first-place medal around her neck. Last year, she won first place in the fourth-grade division for her project on glue.

The science fair returned to MCE for the second year in a row. Jim Elder, Julia’s father and the fair’s co-chairperson, said this year’s event had a big turnout.

“We had judges from a lot of these companies up here, not all of them, but a lot of them,” Jim Elder said. “They came out and a lot of the engineers and researchers said, ‘This was a really good idea this year.’ One of them came up to me and he’s a research scientist. He said, ‘There are some kids here who I really want them to take care of me when I get older.’”

The top three finishers in each age division earned medals. There were also prizes given away, such as telescopes, microscopes, Chromebooks, hoverboards, LEGO kits and gift cards.

MCE fourth-grader Mercer Cothren won first place for his project on video games. It’s the third year in a row he won a first-place medal.

“I had a lot of fun doing it,” said Mercer, whose older brother, Beckham, placed first in the 10th-grade division.

Jonesburg Elementary fifth-grader Avery Finke didn’t place in the top three in her division, but she earned a subject prize for her project on grocery bags. She tested bags from Schnucks, Wal-Mart and Moser’s to see which one is stronger.

“I didn’t really know what science project I was going to do at first,” Avery said. “My dad was like, ‘Well, you can do grocery bags.’ I was like, ‘That’s what I’m going to do.’”

Montgomery County senior Carie Schroer participated in the science fair for the first time and earned a first-place medal for her cut flowers project, which tested what keeps flowers alive, fresh and healthy the longest. She also earned a $500 scholarship.

“Beckham (Cothren) convinced me to do it,” Schroer said. “From there, I was like, ‘OK, I’m going to make it count because this is my last year that I will be able to compete.’ ” It was super cool to look through and see what everyone else did.”