When Paula Adams first saw the abandoned Burlington-Northern Railroad train depot located on the corner of Hudson and Clay streets in Wellsville several years ago, she was very … 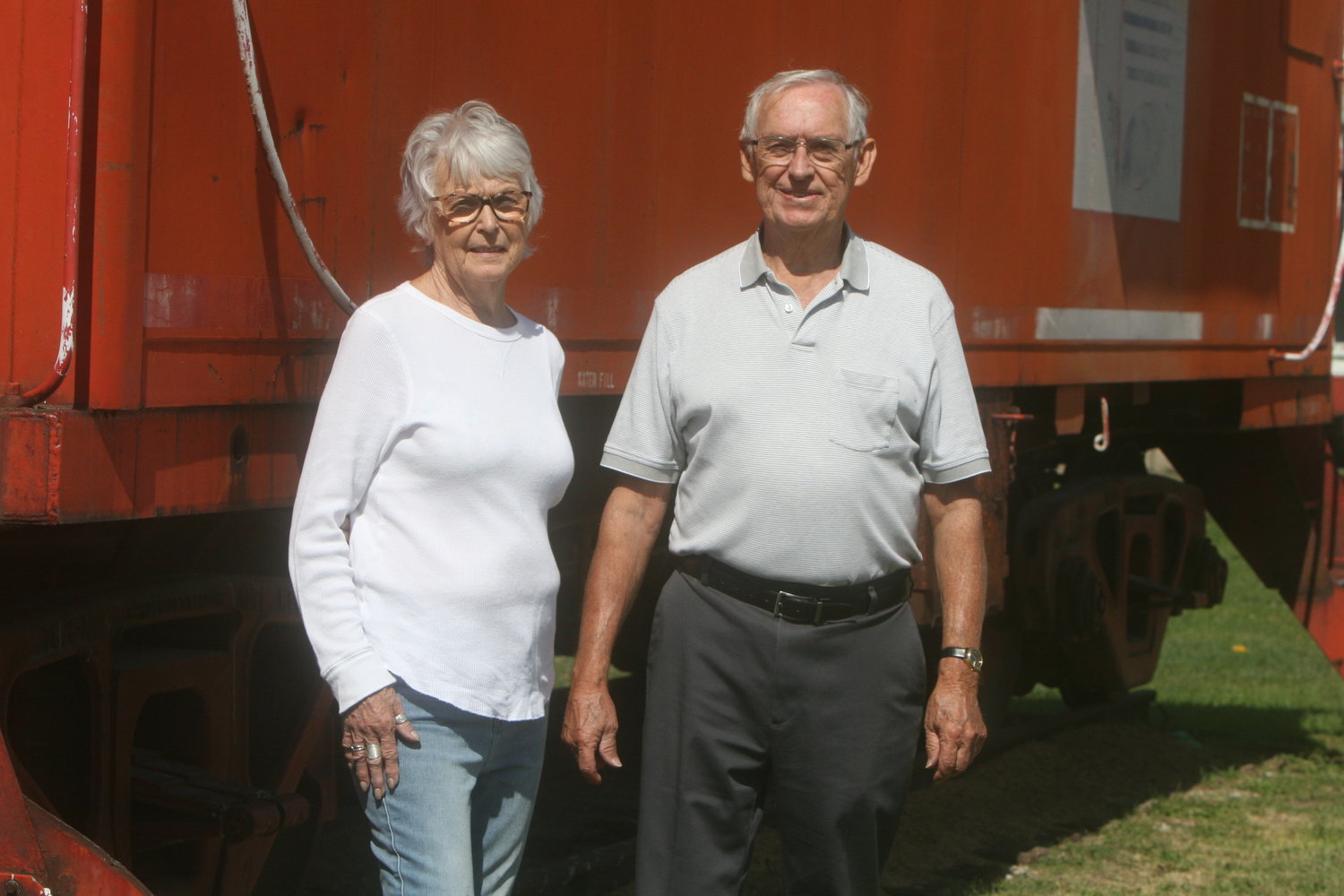 Wellsville residents Paula Adams and Curtis Peery pose near the caboose at the Burlington-Northern Railroad train depot in Wellsville on Sept. 11. Adams and Peery have made plans on improving the depot, which is located on the corner of Hudson and Clay streets.
Theo Tate photo
Posted Tuesday, September 27, 2022 9:22 am
By Theo Tate

When Paula Adams first saw the abandoned Burlington-Northern Railroad train depot located on the corner of Hudson and Clay streets in Wellsville several years ago, she was very disappointed.

“It made me sick that it was sitting there empty,” Adams said.

So the longtime Wellsville resident decided to do something about it.

“I went to the city council and I said, ‘Hey, we need to do something about that building before it gets any worse.’ They said, ‘Have at it.’ They gave me the keys,” Adams said.

Then, Adams got help from another longtime Wellsville resident, Curtis Peery, who formed a committee to be in charge of the depot and Reed Park in Wellsville.

“Eight years ago, we tried bringing it back to life,” Adams said. “We painted the outside and got rid of all of the raccoons that were in here.”

The depot is open to the public only when there’s an event in Wellsville, such as Autumnfest on Sept. 11, where many children painted pumpkins in front of the building.

Adams said she saw plenty of visitors check out the depot, which has plenty of railroad memorabilia such as pictures, uniforms, a freight car and a stop light.

“Everytime I’m up here doing anything, somebody stops and wants to go through it,” Adams said. “If I’m up here running the vacuum, somebody will stop. One day, a lady from Wyoming stopped, and she wanted to take pictures and go through it.”

A visitor from Fort Leonard Wood came by to see the depot during Autumnfest.

“She said that we’re so lucky to have this,” said Peery, who was raised in Wellsville. “There are so many of these depots being demolished.”

In 1981, the depot was moved to its original location from the area that’s nearby Wellsville-Middletown R-I School. During a meeting that January, Montgomery County Historical Society members agreed that the building should be moved along Highway 19 so it can be used as a museum and meeting place for clubs and other organizations.

The depot had a fundraising campaign of around $8,500, which included the mover’s charge of $3,600. The Twyman House Moving Company of Huntsville moved the building during a send-off ceremony that included the W-M school band.

The following year, a tour was given at the depot to more than 250 people from seven different states.

“There was a depot committee and they did some fundraisers and stuff like that,” Adams said. “Then, the old building sat empty for a long time. They lost their committee and it just sat empty.”

Adams, who lived in Wellsville for 25 years, said the Montgomery County Historical Society owned the depot before handing it back to the City of Wellsville.

“It was too hard to maintain,” Adams said.

A red caboose is located next to the depot. Adams said it was bought in the Kansas City area years ago.

“It was going to be crushed,” Adams said. “They were going to scrap it. The committee bought it and moved it down here.”

Adams said she and Peery have made plans on improving the depot. Among the duties are putting the freight car outside, building a handicapped accessible platform and painting the caboose.

But they need help.

“We’re shopping for young blood,” Adams said. “We welcome anybody who wants to help. There is a ton of stuff to do.”