When Brooklynn Fischer signed a letter of intent to play softball for Quincy University on Nov. 12, she was thrilled to see Randi Shanks in attendance. 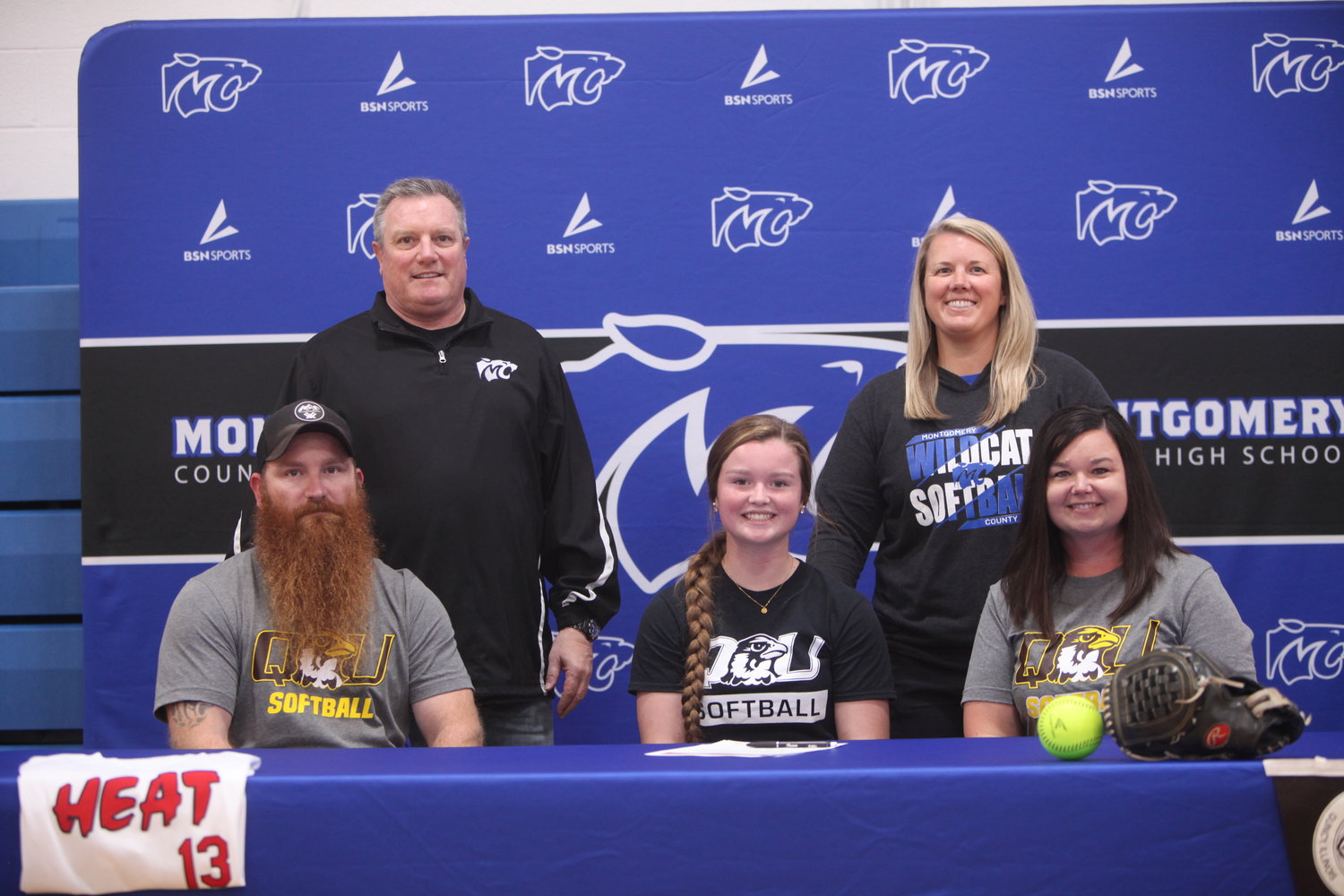 When Brooklynn Fischer signed a letter of intent to play softball for Quincy University on Nov. 12, she was thrilled to see Randi Shanks in attendance.

“She’s my pitching coach,” the Montgomery County senior said. “I’ve been pitching with her since middle school. She’s a very good coach. She’s probably one of the biggest reasons I’m here today.”

Shanks helped Fischer become one of the top athletes in MCHS softball history. During her four-year career, Fischer finished with over 500 strikeouts, a .571 batting average, a .667 on-base percentage, two no-hitters, a perfect game and a district championship.

“Brooklynn is one of a kind,” Shanks said.

Now, Fischer will look to carry her success to Quincy, which competes in the NCAA Division II level and is coached by Carla Passini. The Hawks finished 20-24 in 2021.

“I’m really excited for a change,” Fischer said. “I’m kind of nervous, but I think everybody is when they get to that point.”

Fischer said the Quincy softball team plans to have her do some hitting.

“When you’re a pitcher, most colleges don’t want you to hit because they really want you to focus on pitching,” Fischer said. “Pitching is a full-time job. They’ll give you the option (to hit), which is a really big benefit. So I’ll be hitting. I’ll be pitching. I think they’ll have me in the field somewhere, like in the outfield or maybe first.”

Besides Shanks, Fischer’s teammates and coaches of the MCHS softball team and family members also attended the signing.

“I’ve been very excited for this day,” Fischer said. “Now that I’ve done it, I feel kind of relieved and I’m really excited for my future.”

Shanks said she’s happy that Fischer is continuing her softball career to the next level.

“She has worked so hard,” Shanks said. “She’s such a good kid. School wise, she found the perfect fit for her. I’m excited. It's been fun to watch her blossom in the last year and a half. She’s a special kid, for sure.”

Shanks held her pitching lessons with Fischer at a barn in St. Charles County. Shanks said Fischer improved a great deal from the first day they met.

“She was very hard on herself,” Shanks said. “It’s funny that I told her, ‘For the first six months I worked with her, I thought you hated me.’ She would get so upset and she was so quiet. Then, she started growing up more and more. It’s been fun to watch her mature as an athlete and as a kid.”

Fischer said she enjoyed having lessons with Shanks, who has been a pitching coach for 21 years.

“I had a lot of fun with all of the girls I played with, especially (senior) Sam (Queathem), since we’ve been playing together for so long,” Fischer said. “I’m going to miss them.”
Fischer earned first-team Class 2 all-state honors from the Missouri High School Fastpitch Coaches Association. She was one of 19 players who were named all-state.

“That’s a goal that I had since middle school,” Fischer said. “It was a pretty big accomplishment for me. I was pretty proud of myself.”