With her older sister out for the season due to an injury, Montgomery County sophomore Maddy Queathem did something she hasn’t done since middle school – play catcher. 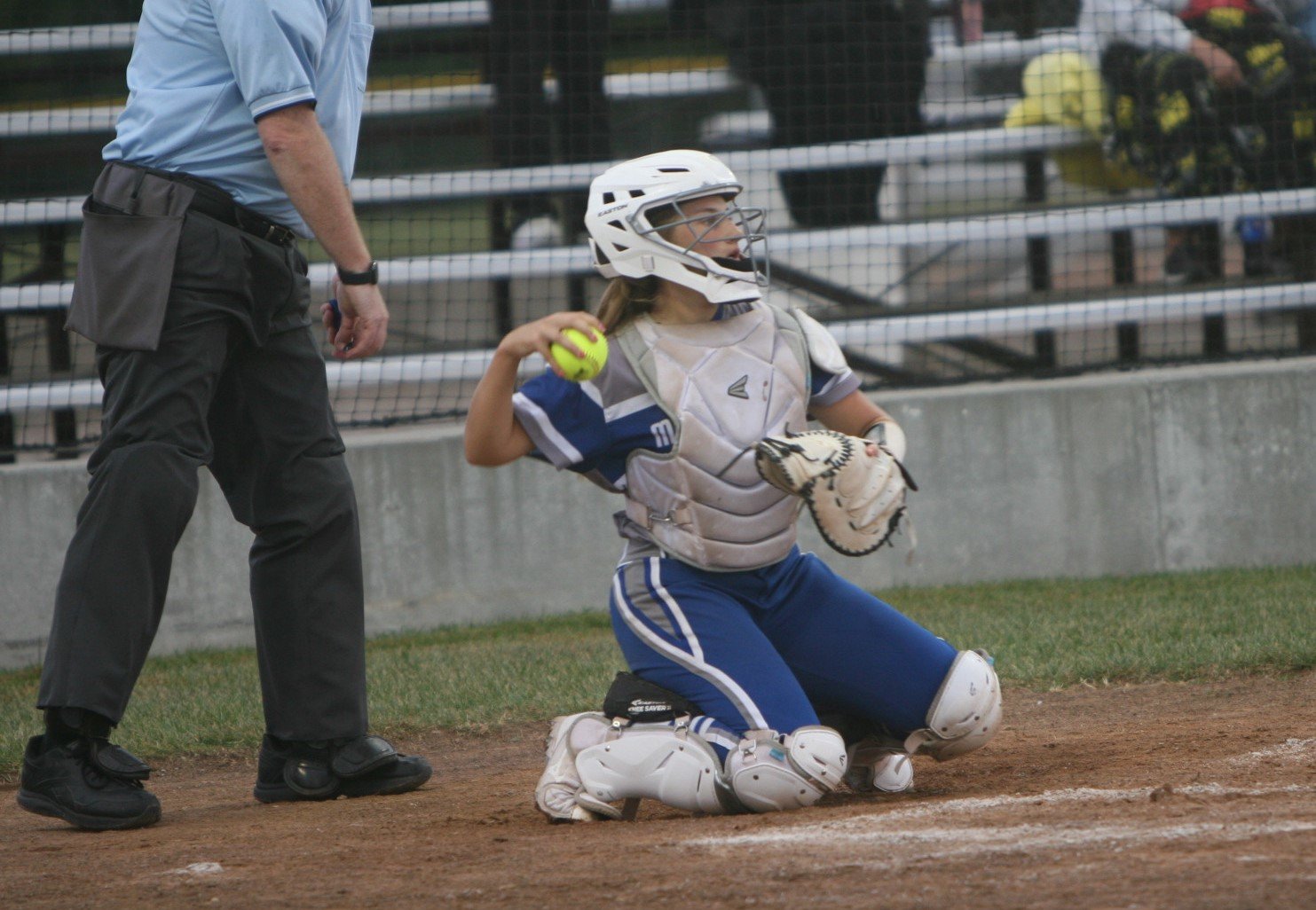 Montgomery County sophomore Maddy Queathem tosses a ball while playing catcher in the Wildcats’ home finale against Louisiana on Sept. 30. She replaced her older sister, Sam, behind the plate after a season-ending injury the week before.
Theo Tate photo
Posted Thursday, October 14, 2021 9:59 am
By Theo Tate

With her older sister out for the season due to an injury, Montgomery County sophomore Maddy Queathem did something she hasn’t done since middle school – play catcher.

Queathem was picked to play behind the plate in the Wildcats’ home finale against Louisiana on Sept. 30. Senior Sam Queathem played catcher for MCHS all four years before she suffered a season-ending leg injury against Warrenton on Sept. 25.

“It’s a hard thing to do because there are some big shoes to fill,” Maddy Queathem said. “She has done a great job this year.”

Queathem turned in a strong effort as the Wildcats’ catcher, getting a single and scoring a pair of runs to help her team cruise to a 19-4 win over Louisiana in four innings. After the game, she got a big hug from Sam, who was on crutches.

“Hugging her was probably the hardest part because I hate to see her go, especially since she’s injured and she can’t play anymore,” Queathem said. “It sucks for her and it’s not a good place to be in.”

Queathem has been a versatile player for the Wildcats in her two years on the team. She played second base for most of the season and did some pitching during a jamboree in August. Last year, she played shortstop.

“It’s a lot, but you just have to do what your team needs,” Queathem said. “Whenever they need me, I’m there.”

Queathem’s strong play this season helped the Wildcats enjoy their seventh winning season in nine years. MCHS ended its season at 16-8, surpassing its win total of 10 from last year. The team lost to New Bloomfield 5-1 in the Class 2, District 3 semifinals on Oct. 13 at South Callaway High School.

Queathem, who is one of six sophomores on the team, said head coach Audra Heimer and new assistant coach Don Moultrie have been helpful to her this season.

“It’s really nice playing for them,” Queathem said. “They’re great coaches and it’s nice to have them here.”

Queathem said her team has improved tremendously from early September, when it was 3-3 after suffering back-to-back losses to Silex and Mark Twain.

“We started off a little rough, but we’re starting to come together,” Queathem said. “Our bats are going. Our fielding has gotten a little better over the time that we have been practicing and everything. I feel like we’re getting closer as a team. We just play together better.”

A year ago, Queathem was part of a large freshman class that combined for 60 hits and 22 RBIs. She earned a spot on the all-Eastern Missouri Conference team after hitting .278 with a home run and 14 RBIs.

“It was a big accomplishment for me as a freshman to get all-conference,” Queathem said. “But you just have to put in all of the hard work and it will pay off eventually.”

Queathem, who also plays basketball in the winter, said the best highlight of her high school softball career is playing with her older sister.

“It’s nice playing with my sister,” Queathem said. “It’s been nice having that best friend relationship on your team. She was always there for me.”