MCHS raises over $7,500 after Pink Out match with Centralia

Before the Montgomery County volleyball team got ready to play its Pink Out match against the Centralia Panthers on Oct. 5 at the Ballew & Snell Court, Kelly Flake got a huge surprise while …

MCHS raises over $7,500 after Pink Out match with Centralia 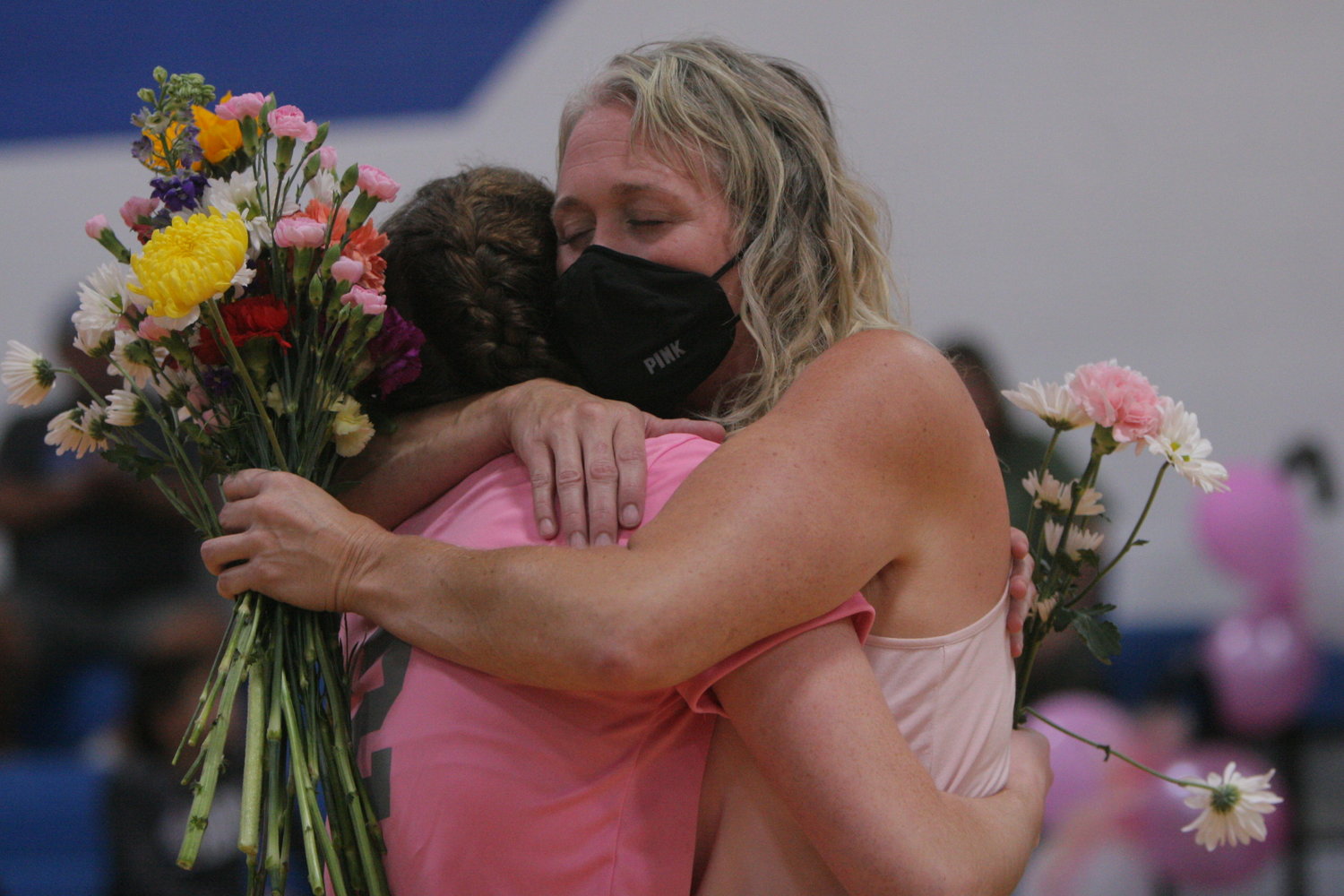 Kelly Flake hugs her daughter, Carson, before the Montgomery County volleyball team’s Pink Out match against Centralia on Oct. 5. The Wildcats played the match in honor of Kelly, who was diagnosed with cancer in July. Carson is a junior on the squad.
Theo Tate photo
Posted Thursday, October 14, 2021 10:19 am
By Theo Tate

Before the Montgomery County volleyball team got ready to play its Pink Out match against the Centralia Panthers on Oct. 5 at the Ballew & Snell Court, Kelly Flake got a huge surprise while sitting in the stands.

The squad presented a check of $4,477 to the Jonesburg resident to help her beat cancer. She was diagnosed with the disease in July.

“It was heartwarming and overwhelming,” Flake said. “I love the support of the community. It’s been unbelievable since I found out (my diagnosis). It started with a few people around Jonesburg and it has taken over Montgomery County. It makes my heart full and it helps me fight.”

Then, Flake hugged all 22 players from the junior varsity and varsity teams. The last player she hugged was her daughter, Carson, who is a junior on the varsity squad. It drew a big round of applause.

“That’s my baby,” Kelly said. “I want to hug her and I would never let her go. I just hope she goes out there and kicks butt every time.”

“I think we had a lot of good moments, but I also wished we had a little bit more fight in us,” Carson Flake said. “That was kind of what the night was about.”

Centralia defeated MCHS for the first time since 2017, snapping a six-match losing streak to the Wildcats. The two teams will square off again at 7 p.m. on Oct. 25 in a Class 3, District 7 semifinal match at MCHS.

“I knew they were going to be a tough team,” MCHS coach Rachel Leu said. “They’re a district team for us. Obviously, we wanted to come out on the winning side of things, but there are some things that we got to work out. Hopefully, we can get that worked out in the short amount of time we have left in the season so we could make a little bit stronger run during districts.”

During a visit to the doctor in July, Kelly Flake – who has lived in Montgomery County since 2000 – found out she had cancerous cells in her uterus and cervix. They later spread to her colon, lymph nodes and iliac bone. She completed her radiation in August and will be going through chemotherapy treatments until February.

“It’s going to be a long road,” Flake said. “But with the support that everyone has given me, it really does help build me up.”

The Wildcats play a Pink Out match in October every year. Leu said she decided that the team was going to raise money for the 44-year-old Flake in this year’s match just two days after finding out the cancer diagnosis.

“If somebody of your own is in trouble, you want to help them out,” Leu said. “All of this support from the community speaks a lot about Montgomery County and how they are there for everybody. I couldn’t be more proud of the turnout and the donations and everything that everybody did to help raise money for the family.”

Food items such as hot dogs, nachos, burgers and cotton candy were sold at the match. Also, a 50-50 raffle was held.

All proceeds went directly to the Flake family. By the end of the night, the volleyball team raised over $7,500.

“This is overwhelming for what they did for me because the medical bills are crazy and they just started,” Flake said. “This will be a huge help for me to keep my kids in the same lifestyle that we have right now. So every little penny goes a long way for us.”

Carson Flake said despite the loss, she was thrilled with the way her team supported her mother.

“It was so important,” the junior said. “I can’t explain how much the community means to me and our family for helping. I don’t know how to measure how much we’re thankful for everything.”