Lyric Ford had a pair of reasons to be thrilled in her final trip at the Class 3 state girls cross country championship meet on Nov. 5 at Gans Creek Course in Columbia. 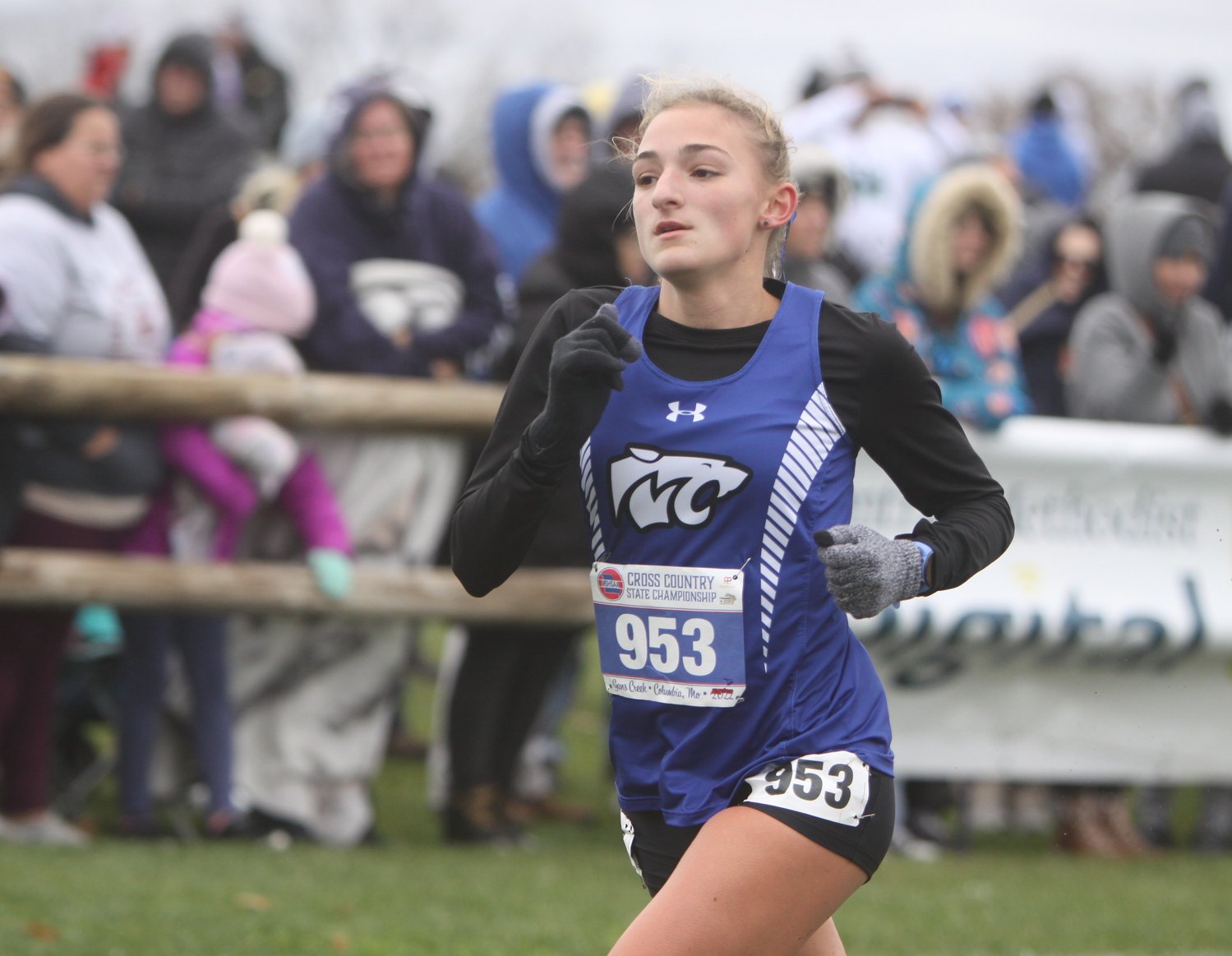 Lyric Ford had a pair of reasons to be thrilled in her final trip at the Class 3 state girls cross country championship meet on Nov. 5 at Gans Creek Course in Columbia.

First, the Montgomery County senior found out that she was on the cover of this year’s state cross country program.

Then, she ended her high school cross country career on a high note, placing fourth with a time of 19 minutes, 6 seconds at the 5,000-kilometer course. It was Ford’s fourth all-state medal.

“It means a lot, especially since it is my senior year,” Ford said.

Ford was the only Montgomery County area runner to receive all-state honors in Columbia. Her teammate, sophomore Jadrian Thurmon, placed 71st with a 17:59.8 in the Class 3 boys race. Three Wellsville-Middletown runners – senior Kaleb Peak, junior Bethany Slovensky and sophomore Hunter Bickell – competed in the Class 1 state meet, but none of them placed.

All five runners competed in temperatures in the low 40s with windy conditions. Rain hit the Columbia area earlier in the day.

“It was freezing the whole race,” said Thurmon, who made his first state appearance. “It was nothing but rain, mud and a lot of people. Even when I had people in front of me, the wind was kicking me in the face. It was pretty tough.”

Bickell finished 71st with a 19:21.8 and Peak placed 76th with a 19:23.9 in the Class 1 boys race. Both competed at state for the second year in a row. Last year, they helped the Tigers finish third in the team standings.

Slovensky came in 118th with a 25:31.6 in the girls race in her second state appearance. In her last trip to state in her freshman year, she didn’t finish.

“Next year, I hope to come back to state and do even better,” the junior said. “Hopefully, I’ll have a much better time than I did this year.”

Ford finished eighth as a freshman, 23rd as a sophomore and 14th as a junior in state competition. She earned a total of 35 medals during her four-year career with the MCHS cross country team. The worst place she finished was 23rd at the Class 3 state meet two years ago.

Ford, who finished with 11 career wins, was looking to become the first MCHS runner to capture a state title in cross country as she was in first place after the first mile. But she dropped to fourth at the two-mile mark.

“I went in with a strategy,” said Ford, who qualified for state by finishing third in the District 3 meet on Oct. 29 in Fulton. “About 1,000 kilometers in, that strategy went out the window really fast.”

“That’s the best of the best right there,” Ford said. “It’s sad that I won’t be able to race against them again.”

A picture of Ford running behind Gabrielle Brown of Dexter in last year’s state meet was used for the front cover of the state cross country program. Ford said she was amazed when she found out about it.

“MSHSAA posted a picture of that cover on Instagram,” the senior said. “I thought it was like a normal picture. When I saw it in the book, I was like, ‘Oh, I’m famous.’ Normally, I throw the books away. But for this one, I think I will have to keep it.”