Dani Hager’s senior year with the Wellsville-Middletown girls basketball team started on a down note as she injured her left knee during the first weeks of practice.

“We were doing our … 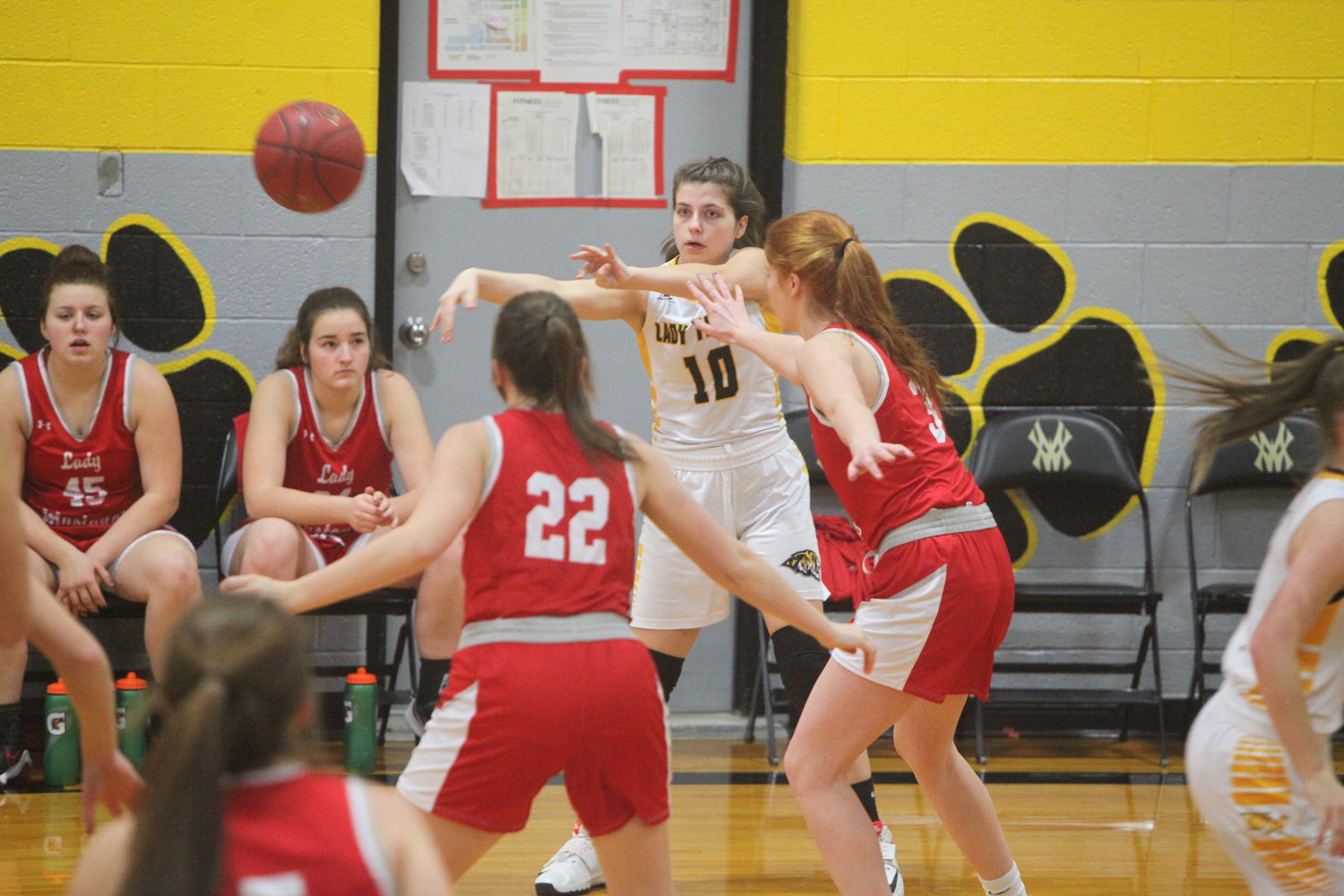 Wellsville-Middletown senior Dani Hager makes a pass during a home game against Marion County on Jan. 10. Hager is the only senior on the W-M girls team.
Theo Tate photo
Posted Thursday, January 20, 2022 10:21 am
By Theo Tate

Dani Hager’s senior year with the Wellsville-Middletown girls basketball team started on a down note as she injured her left knee during the first weeks of practice.

“We were doing our basic layup drills,” Hager said. “When I went up for the layup, my knee was kind of locked in place. It kind of self extended itself and it made a weird noise. I couldn’t walk on it for a minute.”

But before the Tigers’ season began on Nov. 29 against Mexico in the Montgomery County Invitational, Hager had reason to be thrilled. She was cleared by her doctors to play basketball.

“I had to wear a specific brace on my leg for six weeks,” Hager said. “If I was able to run and play with it with a compression sleeve during games, then I was able to be cleared.”

So far, Hager has not missed a game this season. She said she is happy that she is playing in her fourth and final season with the Tigers.

“I’m so excited that I could finish out my year, especially with this group of girls,” Hager said. “I want to give them all of the guidance that I can so they’ll have better years.”

Now, Hager is hoping her team finishes with a successful season as her high school basketball career comes down to its final months. She’s the only senior of a squad that has a combined seven freshmen and sophomores.

“Overall, I think our team has a lot of potential in the future,” Hager said. “We have a lot of freshmen this year. So we’ll continue to get better over the year. Hopefully, we’ll go far in districts this year.”

Hager started in the Tigers’ senior night game against Mark Twain on Jan. 14. She finished with two points to help W-M (3-8) knock off Mark Twain 43-40 for its first Eastern Missouri Conference win of the season. Hager was honored after the game.

W-M coach Todd Cripe said he has been impressed with the way Hager has been playing the last three years.

“From her sophomore to her senior year, she has really progressed in a nice way,” Cripe said. “She comes to summer workouts and things like that to try to improve her strength, agility and basketball skills. She has put in the hard work and the time. She made some strides for us.”

Basketball has been a passion for Hager ever since she started playing the sport in second grade.

“I like the aggression and being able to go out on the court and really play one-on-one with players,” Hager said. “I’m terrible on the sidelines. It’s OK screaming at the players and thinking I could do better than they can. But I like to be down on the floor with everybody.”

Hager plans to attend Southeast Missouri State University next year. She will major in psychology and minor in criminology.

“I’m very interested in people’s behavior and how a person thinks and why they do the things they do and all of that type of stuff,” Hager said. “Someday, I would like to be part of the government, working in that kind of field.”