Sam Queathem had a reason to celebrate at the Eastern Missouri Conference championship meet on May 3 at Jim Blacklock Field.

The Montgomery County senior captured the … 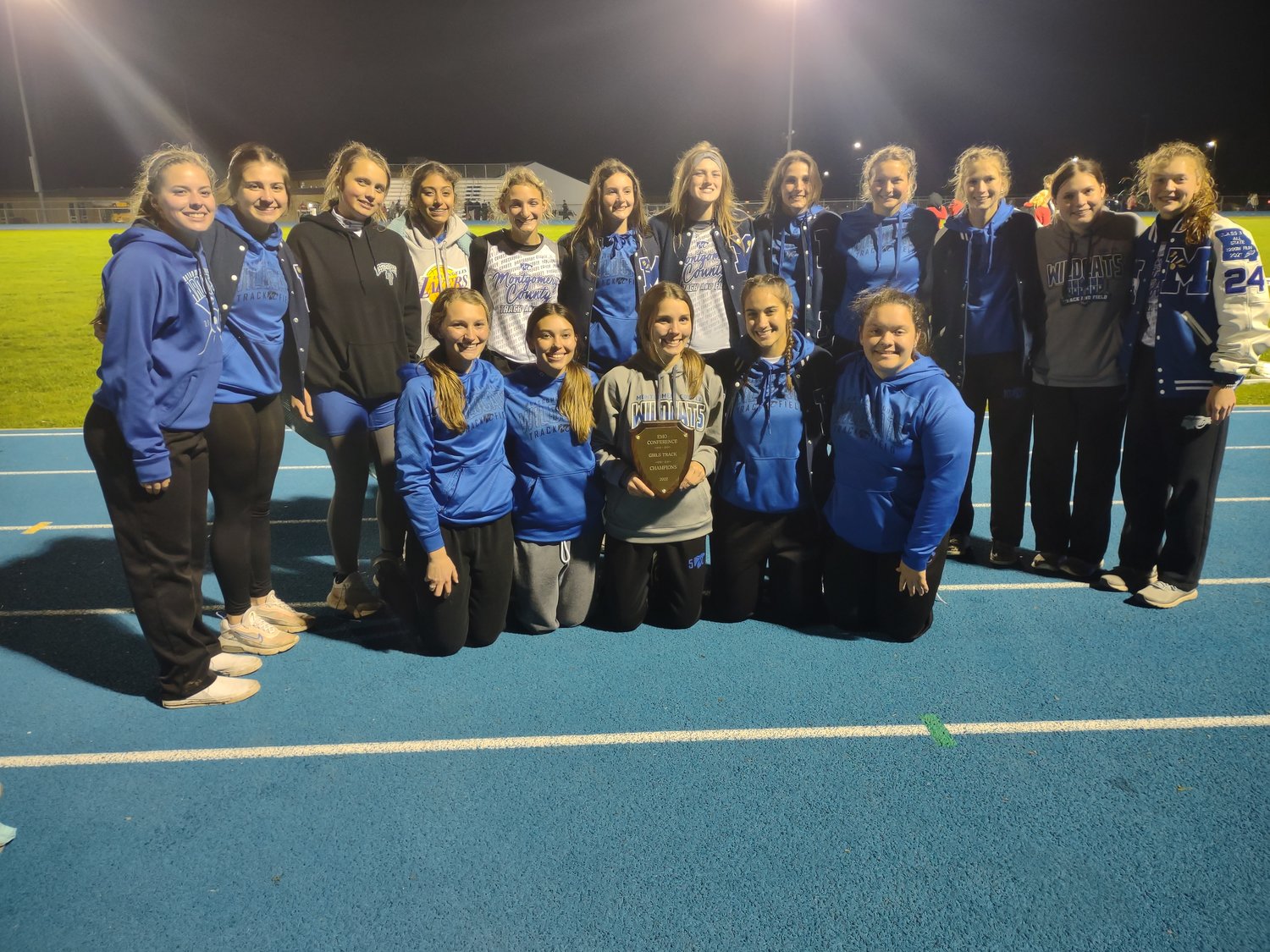 The Montgomery County girls track team poses with its Eastern Missouri Conference championship plaque after winning the 11-team conference meet with 188.5 points on May 3 at Jim Blacklock Field.
Theo Tate photo
Posted Thursday, May 12, 2022 9:41 am
By Theo Tate

Sam Queathem had a reason to celebrate at the Eastern Missouri Conference championship meet on May 3 at Jim Blacklock Field.

The Montgomery County senior captured the first of her conference titles in track and field after placing first in the javelin and shot put with season-best marks at the 11-team EMO meet. She tossed 104 feet, 6.25 inches in the javelin and a 32-1 in the shot put.

The strong efforts helped the Wildcats capture their sixth league championship and their third in four years. MCHS finished with 188.5 points and won the meet by 29 points. After the meet, Queathem and 16 of her teammates got to run a victory lap around the track.

“It was a pretty special moment for me to go out,” Queathem said.

Bowling Green finished second with 159.5 points. The Wildcats trailed the Bobcats for most of the meet until they outscored the Pike County school 58-27 in the final four events.

“It has been back and forth between us and Bowling Green, so it’s really exciting to kind of pull through,” MCHS senior Makenna Schmidt said. “They’ve been beating us all season. It’s really good to come back.”

MCHS placed second to Bowling Green in the boys division. The Wildcats finished with 185 points, while the Bobcats scored 200.

Senior Dawson McCown led the Wildcats with three first-place finishes in the 800, 1,600 and 3,200. Senior Ty Leu won the long jump and helped the 400-meter relay team – which also included senior Gavin Mendoza and juniors Adam Czerniewski and Dominic Luttrell – pick up a win. Freshman Tyler Erwin came out on top in the high jump.

The MCHS girls team placed first in a total of nine events. Junior Lyric Ford won the 800, 1,600 and 3,200, sophomore Olivia Shaw placed first in the 200 and 400, sophomore El Reagan won the pole vault and the 3,200-meter relay team of Schmidt, junior Carie Schroer and sophomores Claire Cobb and Malia Rodgers picked up a win.

Shaw and Cobb have competed on three other EMO championship teams this year. They also helped the cross country, volleyball and basketball teams win conference crowns.

Schmidt, who competed in track for the first time since her freshman year, said she was happy to be part of a winning 4x800 team. The week before, she helped the relay team break a school record at the Hermann Invitational.

“We’ve kind of been on a winning streak with our 4x800 team this year, so that’s been fun,” Schmidt said.

Queathem was seeded second in the javelin, but won the event by two feet, three inches over Bowling Green’s Megan Niemeyer. An hour later, she won the shot put by 5½ inches over Mark Twain’s Madison Epperson after coming into the event seeded fifth.

“For me to be able to beat the Bowling Green girl in javelin and beat two of their girls in the shot put was a huge step up because I’ve been right behind them all year long,” Queathem said. “I finally stepped ahead of them. It gave us more points for our team to be able to get that conference championship for our team. I’m very proud of myself and I’m glad that I took that step up and got ahead of those girls.”

Queathem came close to equaling her personal-best throw of 106-5.25 in the javelin, which was set last year at the Cuba Relays.

“In the beginning of the year, I was kind of struggling,” Queathem said. “But then I worked with coach (Joe Klekamp) a lot. He kind of changed my hand position. We worked a lot on trying to perfect my throw to where it would give me the best opportunity. I’ve gotten back to where I was throwing last year. So I’m excited to see how the rest of the season goes.”

The Wildcats will host the district and sectional meets at Jim Blacklock Field. Districts are scheduled for May 14 and sectionals will be on May 21.

“There’s definitely a home advantage here,” Schmidt said. “The crowd is so much bigger at home, so that’s more motivating. Being able to run this track for every practice, you get used to it. I’m glad that districts and sectionals are here.”