The Wildcats left Franklin County under the .500 mark after suffering a … 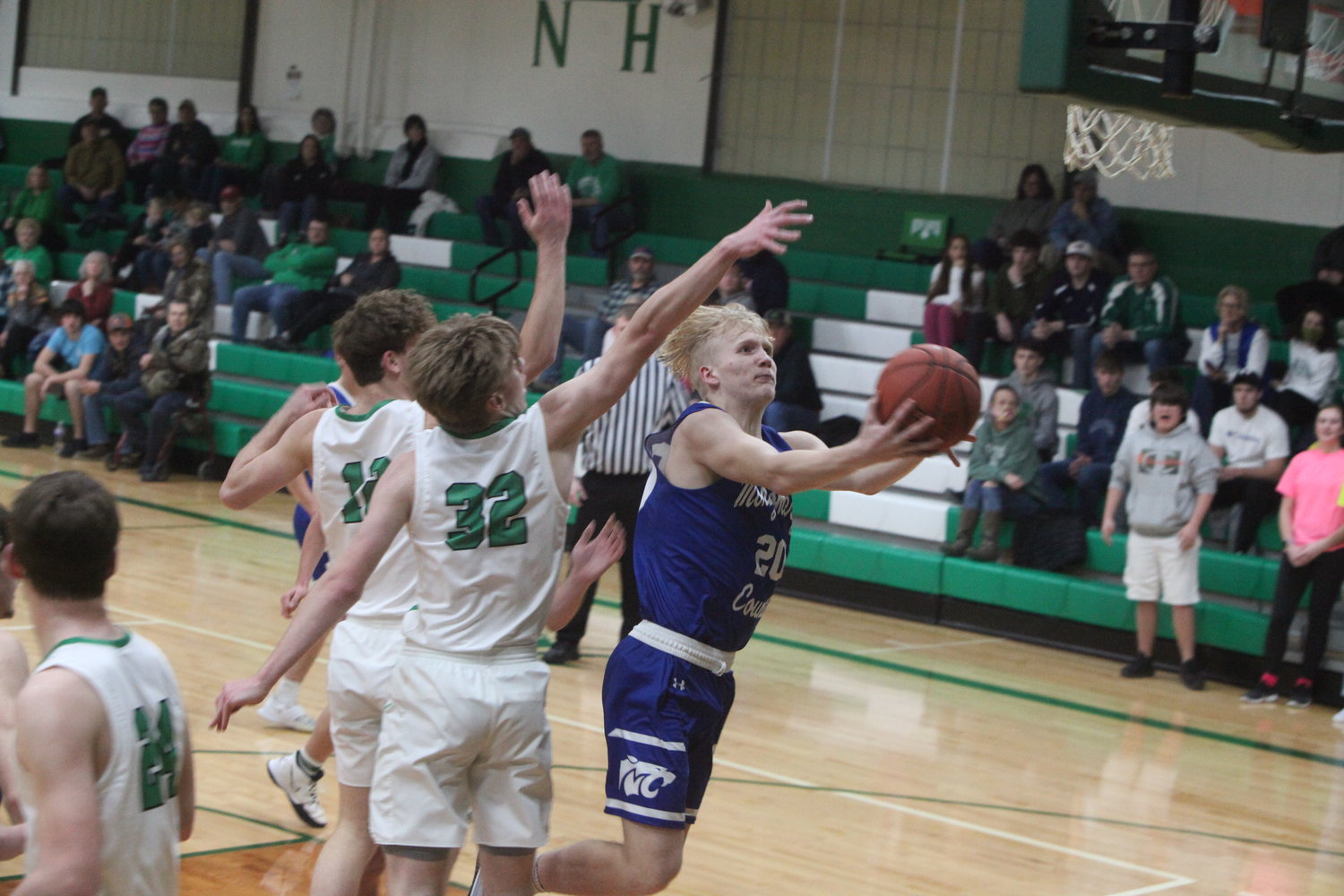 Montgomery County freshman Tyler Erwin goes for a shot in the first quarter against the New Haven Shamrocks on Jan. 7. Erwin and the Wildcats lost to New Haven 37-36.
Theo Tate photo
Posted Thursday, January 13, 2022 10:12 am
By Theo Tate

The Wildcats left Franklin County under the .500 mark after suffering a heartbreaking, 37-36 loss to the Shamrocks. MCHS, which was coming off a 53-52 overtime road win over Fort Zumwalt East two days before, dropped to 5-6.

The Wildcats had a chance to win the game in the closing seconds, but a 3-point attempt from senior Drake Smith bounced off the rim. MCHS called four timeouts in the last seven seconds of the game to draw up a final play.

“That was poor end-of-the-game management on my part,” MCHS coach Scott Kroeger said. “I was trying to get something started from the sideline instead of getting the ball in and letting us make a play. That was poor on my part. I overcoached in that department right there.”

New Haven came back from an eight-point, fourth-quarter deficit to beat the Wildcats. The Shamrocks also avenged the 59-44 loss to MCHS in the third-place game of the Montgomery County Invitational on Dec. 4.

The Wildcats led 34-26 after senior Ethan Rakers hit a basket with 6:51 left in the fourth quarter. New Haven rallied with an 11-2 run, including a game-winning bucket by Sam Scheer with 11 seconds remaining, to win the contest. Scheer finished with 14 points to lead the Shamrocks.

“They started drawing fouls and getting scorers,” Kroeger said. “It seems like almost every single time we start to get scored on, we struggle hard to score. For whatever reason, whenever our defense is not going, our offense gets very, very stale. We went through long stretches where we were playing good defense. Then, it’s downhill drive after downhill drive for them. They were getting to the basket, drawing fouls, making layups and getting rebounds.”

Smith finished with 11 points – including eight in the first half – to lead the Wildcats. He scored back-to-back buckets late in the second quarter to give MCHS a 20-12 lead.

Also for the Wildcats, freshman Clayton Parker scored eight points off the bench. With the game tied at 8-8 early in the second quarter, Parker hit a free throw, then followed with a 3-pointer to give the Wildcats a 12-8 lead after they were down 6-0 in the first four minutes.

The Wildcats have been successful against the Shamrocks the last several years, winning 11 of the last 14 meetings. Two years ago, MCHS beat New Haven three times.

This year’s New Haven team has seven seniors and has eight players six feet and over.

“They’re very tall,” Kroeger said. “They’re extremely fundamental. Coach (Aaron) Peirick was one of my coaching buddies. He’s a very good coach. He’s one of the best in the area at adjustments. He makes very good adjustments, especially on defense to take certain things away. The kids listen to him. It’s a credit to the coaching staff over there and the kids. They’re tough to beat multiple times.”