As the Wellsville-Middletown girls basketball team approaches the halfway mark of its season, it is setting its sights on doing something it hasn’t done in over a decade – finish with a … 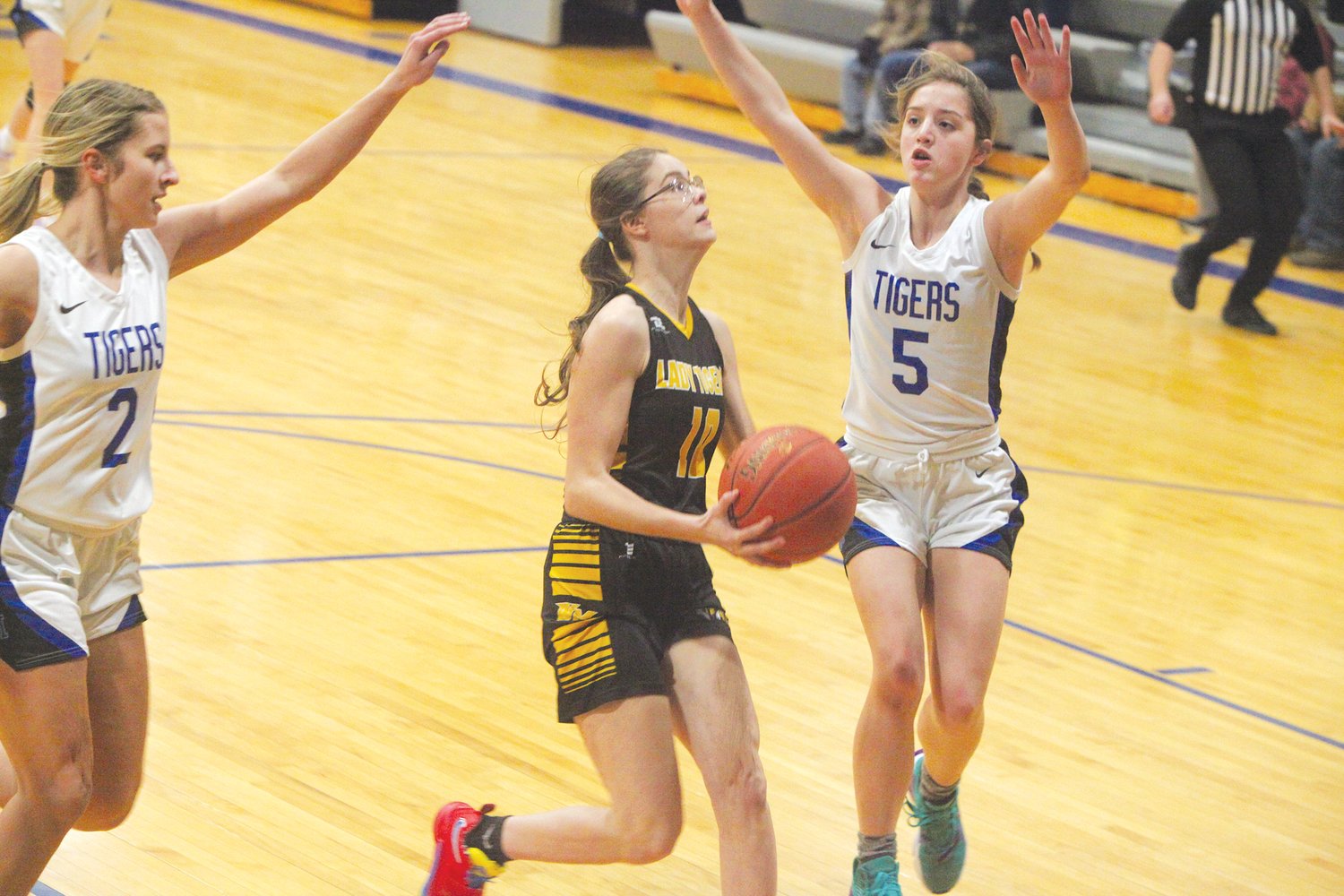 Wellsville-Middletown sophomore Indica Scott goes for a layup in the second quarter against Mark Twain on Jan. 13. Scott finished with eight points off the bench to help the Tigers win 51-16.
Theo Tate photo
Posted Thursday, January 19, 2023 9:56 am
By Theo Tate

As the Wellsville-Middletown girls basketball team approaches the halfway mark of its season, it is setting its sights on doing something it hasn’t done in over a decade – finish with a winning record.

After beating Mark Twain 51-16 on the road on Jan. 13, the Tigers improved to 8-4 with 10 games and a tournament left in their regular season. They are three wins away from matching last year’s win total of 11.

“I’m excited about where we’re at right now,” W-M coach Todd Cripe said. “I think if we continue to pressure teams like we’re pressuring and get extra possessions, that’s going to help us out a bunch moving forward for the rest of the year.”

The Tigers also are looking to turn in a strong season in Eastern Missouri Conference play. They won their first conference game of the season with the victory over Mark Twain and improved to 1-1 in EMO play. Last year, W-M finished 4-5 in league play.

“All of the teams return their core players,” said Cripe, whose team began its EMO season on Dec. 16 with a 54-33 loss to Montgomery County. “Up and down the league, everybody returns a ton of varsity experience. It’s a dog fight every night in the conference from top to bottom. We’re looking to compete in the conference.”

Also on Jan. 13, the W-M boys squad dropped to 5-6 overall and 0-2 in EMO play with a 60-27 loss to Mark Twain. The Tigers played with just seven boys as two of their players – senior Dylan Alsop and sophomore Carson Huff – sat out due to injuries.

“Without our two players, we knew we would struggle,” W-M boys coach Steve Lasman said. “But our kids played hard. Mark Twain is a good team.”

Both W-M girls and boys teams were scheduled to play North Callaway on the road on Jan. 17. They will play New Haven at home on Jan. 20.

The W-M girls won their fifth straight game after beating Mark Twain, making it their longest winning streak since they won seven games in a row in 2009.

Defense has been a key in the Tigers’ five-game winning streak. They allowed an average of 31 points per game.

Against Mark Twain, the Tigers had a solid performance from their sophomore class of Keigan Hall, Hallie Guzy and Indica Scott. They finished with a combined 32 points. Hall finished with a game-high 16 points, including 10 in the first half. Guzy scored all eight of her points in the second half and Scott scored eight points off the bench.

With the game tied at 3-3 in the first quarter, the Tigers went on a 6-0 run to take a 9-3 lead and never trailed the rest of the way. They held Mark Twain to just three points in the second half.

Cripe said he expects a strong effort from all eight of his girls in every game.

In the boys contest, senior Jacob Mandrell scored 14 points in the losing cause for the Tigers, who trailed Mark Twain 20-7 after the first quarter and 35-13 at halftime.

Last year, W-M finished 5-4 in EMO play. Lasman said this year’s conference in the boys division is going to be competitive.

“This conference this year is the best in the six years I’ve been here (as W-M coach),” said Lasman, whose team lost to Montgomery County in its league opener on Dec. 16. “There are six or seven teams that are very good.”

Both W-M girls and boys teams earned No. 2 seeds in the Keytesville Tournament, which is scheduled to start on Jan. 23. Both squads will take on Keytesville in their opening-round games.