The Wellsville-Middletown softball team had a memorable bus ride back from Philadelphia, Mo., on Sept. 12.

For the first time in four years, the Tigers celebrated a victory after cruising to a … 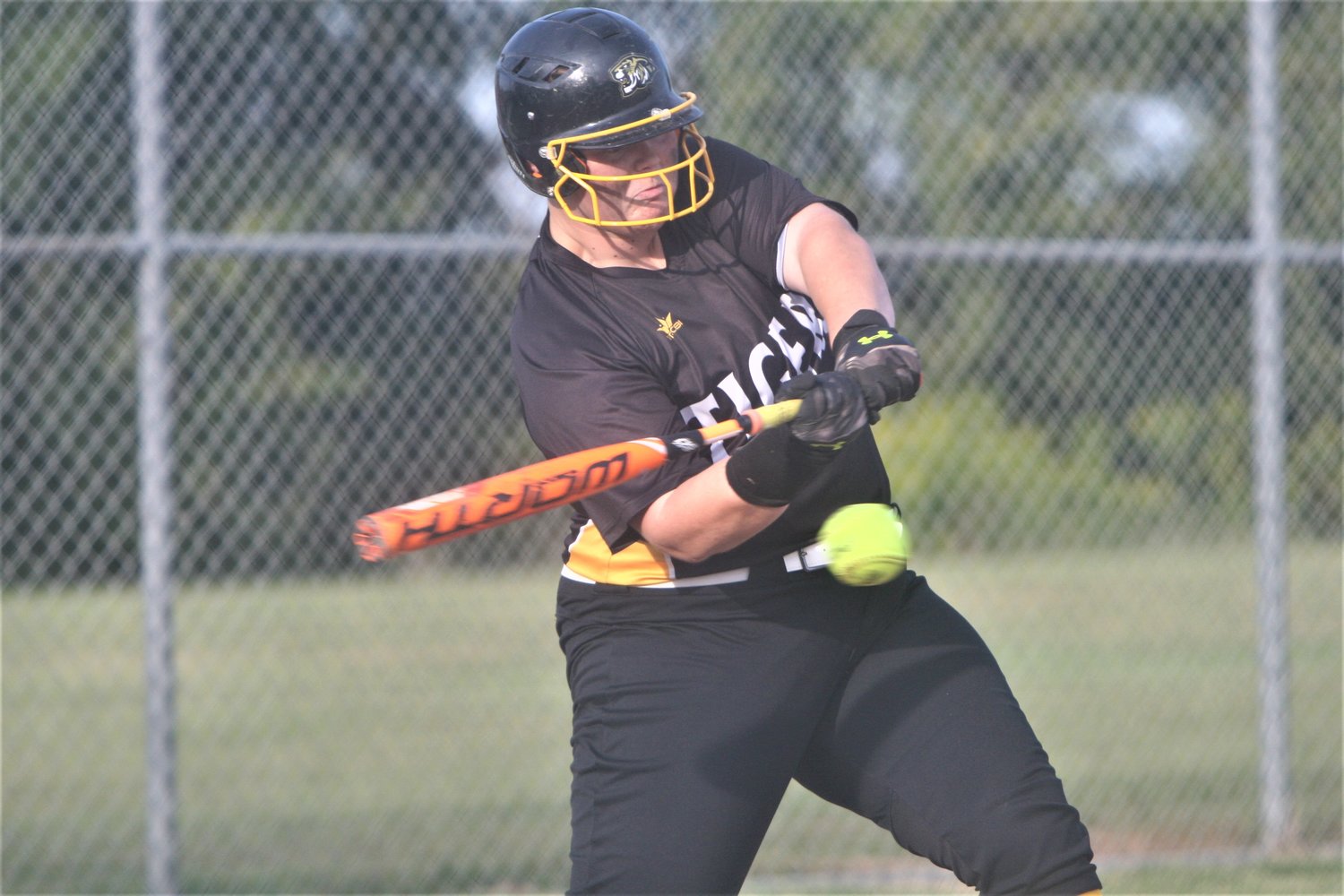 Wellsville-Middletown junior Meagan Cripe swings at a pitch against Louisiana on Sept. 15. She had three hits and two runs scored in the Tigers' 16-5 win over Marion County on Sept. 12 that snapped a 52-game losing streak.
Theo Tate photo
Posted Thursday, September 22, 2022 11:56 am
By Theo Tate

The Wellsville-Middletown softball team had a memorable bus ride back from Philadelphia, Mo., on Sept. 12.

For the first time in four years, the Tigers celebrated a victory after cruising to a 16-5 win over the Marion County Mustangs on the road, snapping a 52-game losing streak.

“I’m really proud of us,” said junior Meagan Cripe, who plays first base. “We’ve been putting in the work and it’s starting to pay off.”

W-M picked up its first win since Sept. 20, 2018, when it knocked off Mark Twain 3-2 in 15 innings in a home game. The Tigers also got their first victory under new head coach Taylor Sewell.

“They were pumped after the game,” said Sewell, who replaced Jessica Eichholz as coach this fall. “The whole community was excited for these girls. It was an exciting time for Wellsville.”

The Tigers picked up two more wins on Sept. 17, beating Madison 11-5 and Bucklin 14-6 on the road. They took a 3-6 record into their road game against Elsberry on Sept. 20.
W-M has back-to-back home games against Mark Twain and Hermann on Sept. 22 and 23, respectively, and will participate in the Paris Tournament on Sept. 24. The Tigers have a road game against Montgomery County on Sept. 27.

Cripe said she believes her team will finish with a strong season this fall.

“We just have to keep putting in the work,” Cripe said. “We’ve been practicing. It’s going to take some work, but we have the potential to do really great things here.”

The Tigers had a chance to pick up their second straight win on Sept. 15, when they played Louisiana at home. But they lost to the Bulldogs 12-1 in five innings.

Sewell said in order for her team to get more wins, it must continue improving on offense.

“Our hitting needs to come around,” she said. “If one of them is dead, then the rest of the team is dead. I need someone to shine and start putting the ball in play.”

The W-M coach also hopes for all of her players to stay healthy. The Tigers have just nine players on their team.
“Everyone knows that they can’t get hurt,” Sewell said. “No one can’t get sick. They have to come out every day in practice and do their best.”

W-M lost its first five games of the 2022 season before getting the win over Marion County, which beat the Tigers 19-0 in last year’s meeting at W-M.

“All nine girls wanted that game,” Sewell said. “That’s what pieced it all together.”

In the 2021 meeting against Marion County, W-M had just one hit. In this year’s meeting, the Tigers finished with 24. All nine players in the lineup had at least one hit.

“I told them that hitting is contagious,” Sewell said. “As soon as one gets it, it just starts flowing. They had a decent pitcher. We were just on that night. Our defense was pretty solid. They pieced everything together and they were able to compete in that game.”

Sophomore pitcher Hallie Guzy led the way with four hits and five runs scored and picked up the win on the mound. Cripe, sophomores Indica Scott and Alyssa Beach and senior Kaylee Marshall each had three hits and two runs scored. Sophomore Alivia Stewart had two hits and scored two runs. Sophomores Maddi Poage and Keigan Hall and freshman Brooke Stroup each had a hit.

“Our hitting just came together,” Guzy said. “We’ve been working on that a lot and it fell into place. We had a lot of hits and that’s what won us the game.”

Guzy said she was thrilled that her team is not going to finish with another winless season this fall.

“After losing all of last year, it felt good to finally win,” she said.